Brazil's Nova Uniao fight team is heralded for churning out top fighters by the truckload, especially in the lighter weight classes. How often do we see one camp boasting three fighters in the world top-ten rankings, such as team coach Andre Pederneiras does with featherweights Jose Aldo, Marlon Sandro, and Diego Nunes?

Nova Uniao lightweight Leonardo Santos is a 7-time BJJ World Champion -- once considered the best lightweight grappler on earth -- trying to join his brethren by breaking into the spotlight on this weekend's BAMMA 6 card. Santos is best known as the man in the Youtube video floating around the net who hit a flying armbar on GSP at the 2005 ADCC tournament.

His 8-3 MMA record isn't as dazzling as you might expect for someone with such resplendent grappling credentials, but that's because you also wouldn't expect him to fight an undefeated Takanori Gomi with only three weeks notice in his first MMA fight, or Chute Boxe knockout artist Jean Silva in his third. Since then, Santos has pieced together a 7-1 clip that includes five first-round stoppages (four by submission, one by head-kick KO) and a split-decision loss to former top-25 fighter Kazunori Yokota in Sengoku.

Though the winner of his match with Jason Ball is to determine the #1 contender and affix a title shot versus Rob Sinclair, Santos was relegated to preliminary status with the bigger name fighters captaining the main. Murilo "Ninja" Rua faces Tom "Kong" Watson for the BAMMA 185-pound belt in the event headliner, supported by middleweight bouts pitting Frank Trigg vs. John Phillips and Ivan Salaverry vs. Matt Ewin.

After the jump we'll have the BAMMA 6 match ups and live stream information, as well as Leo's exclusive outlook on his opponent and the opportunity before him.

"I watched some of his fights, and from what I can see he is a good striker with strong takedown defense," Santos shared earlier this week before flying out to London. "I trained more standing for him, boxing and Muay Thai, at Novia Uniao with coaches Giovani Diniz and Johnny Eduardo. I'm also training hard with Jose Aldo and Marlon Sandro, who both have good hands, and I'm really laboring to improve my physical conditioning."

Even though bolstering his grappling championships with more MMA accolades has been a dream of his, Santos isn't overlooking Saturday's opponent, scrappy UK veteran Jason Ball. "When we get into a big event, we certainly look for the championships," he said. "But I'm keeping my focus on this fight, and if God allows, he will give me the chance to fight for the belt."

Brother of Wagnney Fabiano and cousin to Nova Uniao co-founder, Wendell Alexander, Santos is exciting and a quick finisher. He believes sticking to this routine is the best way to introduce himself to the new audience in his promotional debut, whether it's standing or on the mat, even if judges don't always reward active guard players.

"I'm always looking to finish the fight, and thereby satisfy the fans. I trained hard in my standing game to be prepared for any situation, and don't despair about things outside of my control," Santos relayed on the hazards of judging. "Losses are part of the game. Nobody likes losing, but sometimes it happens. It's more important to look and see what went wrong and what we can do to improve ourselves."

Santos will stay in town to teach a series of BJJ and MMA seminars in the London area after BAMMA 6. He also wanted to give thanks to his sponsor K2 Fight Gear, to Corpo Sao from Argentina and his Nova Uniao teammates for helping him train, and most importantly, to God for his health and the opportunity.

After the purchase of Strikeforce, BAMMA made it clear that they were "ready to play Apple to the UFC's Microsoft" as a venue to showcase rising prospects and the once-elite echelon within MMA's global talent pool. Lovable DREAM and K-1 commentator Michael "The Voice" Schiavello will handle broadcasting duties for this Saturday's BAMMA 6 show, the first since the UFC-Strikeforce merger and a pivotal step for the young promotion.

13-4 Tom "Kong" Watson will defend the BAMMA strap against 20-11-1 Pride legend Murilo "Ninja" Rua in the main event. Since dropping a decision to now-UFC fighter Riki Fukuda at DREAM 8, "Ninja" is 4-1 including a submission over former TUF competitor Jeremy May. Watson out-worked Matt Horwich to win the title at BAMMA 3, and enters the fight on a 9-1 roll with Jesse Taylor accounting for his only recent loss.

Two other old schoolers round out the main card in middleweight contests. 20-8 Frank Trigg looks to rebound after back-to-back Octagon losses to Josh Koscheck and Matt Serra against 13-3 John Phillips, who trains out of Gracie Barra and goes by the nickname "The White Mike Tyson" for winning 12 of 13 by vicious TKO. After a three-year absence, 13-7 Ivan Salaverry will also be looking to soothe two-straight UFC defeats in 2008 to Terry Martin and Rousimar Palhares, returning to action to face 29-9-1 Matt Ewin. Ewin has won seven of his last eight after falling to another experienced vet in Andrei Semenov in 2007.

In the UK, the main card will air for free on the SyFy channel at 9 PM GMT. Internationally, if you place your order before the 19th (today) on BAMMA's stream-site, you can watch both the main and preliminary card live for $20; prices for orders placed after are $20 for the main card and $10 for the prelims.

BAMMA will also jump into the social media market by streaming one fight free on their Facebook page. The full schedule of events and match-ups are listed below. 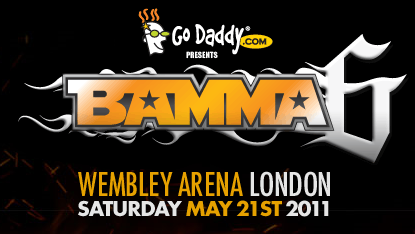