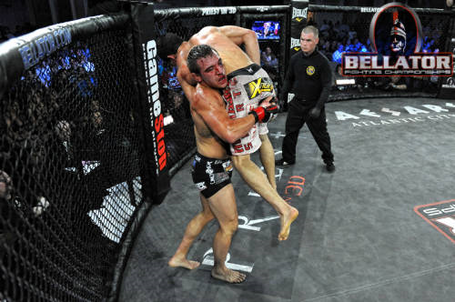 Atlantic City, New Jersey was the setting for last night's Bellator 44 event, which was headlined by the lightweight tournament finals between Michael Chandler and Patricky "Pitbull" Freire.

The match played out like a gritty dogfight from start to finish. The pair traded strikes throughout the first round, with Chandler sticking and moving in and out of range while Freire held his ground and countered with stiff punches. After a short pause due to an inadvertent kick that landed low on Freire, Chandler uncorked two takedown attempts, both of which were stuffed, and the D-1 wrestler seemed to be struggling to close the distance.

The second round exploded with action as Chandler came out aggressive with strikes, then sprinted across the cage to unleash a flying kick. "Pitbull" returned the favor and pursued Chandler for a takedown, but transitioned to a huge flying knee against the opposite fence. They clinched up and Chandler scored a knee below the belt, his second violation.

They continued the striking match until Chandler caught a Freire kick and cradled the leg for his first successful takedown, finishing the last minute of the round with solid ground-and-pound from inside Freire's guard.

Unfortunately, Chandler opened up the final frame with another inside leg kick directly to Freire's cup, this time resulting in a point deduction from referee Keith Peterson and the third recovery period for Freire. When action restarted, it was all Chandler. Freire defended his initial takedown, but Chandler held on, regrouped, and lifted the BJJ black belt off the ground and dumped him on his back. A merciless volley of punches, hammerfists, and sharp elbows drastically slowed Freire's activity on the ground, as Chandler made up for losing a point with a commanding top game to close the round.

The judges all scored the fight 29-27 for Michael Chandler, who remains undefeated at 8-0, takes home the lightweight tournament purse of $100,000, and earns a future shot at divisional champ Eddie Alvarez.

The full Bellator 44 results are after the jump.

Bellator middleweight champion Hector Lombard drew the seasoned veteran Falaniko Vitale in a three round, non-title affair. As usual, Lombard was a whirlwind early, leading with his massive right hook and swinging a few high kicks. Vitale defended well and scored to the body, ducked another Lombard hook, then planted a punch and a straight kick to the midsection.

Vitale's footwork and counterstriking established early that Lombard wouldn't be able to bully the Hawaiian as easily as some of his past foes. What may have been a small moral victory for Vitale resulted in a very patient and strategic change to the fight's pace resulted in the crowd groaning for action. The increase in hesitance continued through the rest of the first round and the entire second, much to the chagrin of the New Jersey crowd, who began booing as soon as the third started.

Passivity was finally cast aside by both fighters, who started

hurling combinations in the pocket instead of pawing complacently from outside. Vitale ducked a Lombard left hook and went to the body with an uppercut, but was greeted viciously on the chin by a follow up right from the champ, which staggered "Niko" and then crumpled him to the canvas.

In his 16th win via TKO, Hector Lombard extends his streak to 18 in a row and his overall record to 29-2-1. The ATT middleweight has not lost since his 2006 decision to Gegard Mousasi in Pride FC.

Russian Alexander Shlemenko was a whirlwind of spinning strikes in his bout against Kings MMA product Brett Cooper. Though some landed perfectly, some landed partially, and some not at all, Shlemenko rattled of an unending series of spinning back-fists and back-kicks in every round. Continually stunning Cooper and backing him up with his unorthodox onslaught, Shlemenko was headed for a dominant first round until Cooper pelted him with a straight right hand out of nowhere.

Having enough of the stand-up, Cooper relied on his strength and clinch game in the second, pressing Shlemenko against the fence with a body lock and landing knees to his thighs. Though there was not offense aplenty, Cooper slowed Shlemenko's momentum with his control and forced the striker into defense-mode.

Even though an exhausted Cooper showed admirable heart and slung uppercuts and hooks until the final bell sounded, Shlemenko was too much to handle on the feet and demonstrated more effective striking to earn the unanimous decision victory. Shlemenko moves to 39-7 overall and 4-1 under the Bellator banner, losing only to champion Hector Lombard.

Lithuanian Judo player Giedrius Karavackas and striker Sam Oropeza were an exciting addition to the broadcast. The southpaw Oropeza fended off takedown attempts and kept the fight standing, where he employed an arsenal of kicks to the head and body, then closed the first with clean strikes from inside Karavackas' guard. The Judoka aimed to work his clinch in the second, and succeeded briefly with a trip and moved quickly to the side headlock position. Oropeza escaped again and recreated the same first round scenario of showering ground-and-pound, this time beckoning the referee to inch closer and ascertain that Karavackas was defending intelligently.

Down two rounds, Karavackas mounted an amazing comeback in the third. He forced another ground battle and resumed control with the scarf hold, but this time retained the position by trapping Oropeza's arm between his legs to lock him down, and delivered a chain of unhindered punishment to the head. When Karavackas could not finish with strikes, he readjusted Oropeza's trapped limb and torqued the armlock from Kesa Gatame for the highly inspiring submission victory.

Gifs from Zombie Prophet of IronForgesIron.com