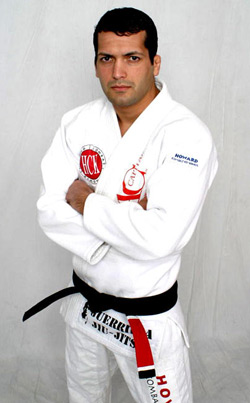 In the last two articles, I’ve discussed the melding of grappling arts in Mixed Martial Arts and the growth of Judo into an Olympic Sport. These two subjects are a natural lead in a man at the very center of blending grappling arts and has rejoined the estranged siblings of Judo and Brazilian Jiu-Jitsu.

Dave Camarillo was the son of Jim Camarillo, the founder of South Valley Judo Club. Jim raised Dave and his brother Dan in the art of Judo with the goal of having his sons compete in the Olympics. Dave and Dan both studied under their father and trained hard from a young age. By the age of sixteen Dave was a black belt and competing at a high level, winning the high school nationals. He traveled to Japan to train with World and Olympic champions seven times in his late teens. In 1996 Dave went to Fresno State to train under his father’s original Judo instructor, the great Sensei Imamura.

In the 1990s, Dave became aware of Brazilian Jiu-Jitsu by watching Royce Gracie in the UFC and assumed that it was the same art as Judo. But his interest had been peaked and when a knee injury limited him to just ground training, Dave did some research and discovered that Ralph Gracie’s academy was a short drive away.

Dave asked his father if he would pay for a few months of BJJ training, and his father flatly refused, so Dave saved gift money from that year’s Christmas holiday. When Dave walked into the Gracie Academy at Pleasant Hill in January of 1996, Ralph and Cesar Gracie ran it jointly. While Dave tied a white belt around his waist that first day, his lifetime of Judo training gave him a huge advantage over the other students. Ralph and Cesar noticed him easily throwing and submitting other white belts and even blue belts on his very first day. They simply had no answer for his speed and athleticism.

Ralph pulled Dave aside and offered to spar with him, Dave promptly threw Ralph to the mat, but once there Dave realized he was in trouble. Dave quickly realized the effectiveness and depth of the technique of Brazilian Jiu-Jitsu on the mat and that he was over matched. Even so, Ralph and Cesar were extremely impressed by Dave and began to give him private lessons. After just ten of these lessons they awarded Dave his blue belt, a rank that normally takes a year for a beginner to achieve.

The difference in Judo and Brazilian Jiu-Jitsu groundwork became very apparent to Dave. Judokas rely on strength, speed and hyper-aggressive attacks to get submissions in a very small time window of ground grappling before being stood up. Brazilian Jiu-Jitsu artists use methodical positional grappling and carefully technique to get submissions. While Dan could have been satisfied with his domination of even some of the experienced students, he was intrigued by his sessions with Ralph and Cesar.

And it was during this early time in his dabbling with Brazilian Jiu-Jitsu that Dave was forced to make a difficult choice. He was offered a spot on the national Judo team; which meant he would be go to live in Colorado Springs at the U.S. Olympic Training Facility and allowed to train, live and eat for free. His life would become Judo until the 2000 Sydney games when he would have a chance to represent the Untied States. His goal of being an Olympian was right in front of him.

But Camarillo knew to be able to qualify for the Olympics he would have to focus exclusively on competitive Judo, and had just enough time spent training in Brazilian Jiu-Jitsu to realize there was something of value there. Dave turned down the offer to join the national team and instead enrolled at San Jose State University, the home of one of the best collegiate Judo teams in the nation and located near Ralph Gracie’s academy.

During his time at San Jose, Dave began to experiment with crossing the two arts. He faced resistance from his Judo coaches who didn’t think much of this upstart Jiu-Jitsu, and Dave responded by tapping them out in a variety of methods. Meanwhile, Ralph was thrilled to have Dave at his school and made Dave an instructor. It was during this time as a blue belt instructor that Dave encountered a young white belt named B.J. Penn. Dave’s brother, Dan also joined him in training Jiu-Jitsu to complement his Judo.

Dave and Dan were competing constantly in both Judo and Jiu-Jitsu. In BJJ matches they would use their superior standing grappling to secure takedowns with throws or trips and then before their opponents could recover their position they would secure submissions. Many Jiu-Jitsu players were simply not ready for the level of the Camarillos’ grip fighting, aggressiveness or speed.

It took Dave only two years to go from a blue belt to a brown belt in Brazilian Jiu-Jitsu, an amazing progress and in 2002 he received his black belt from Ralph Gracie. Dave wanted to share his knowledge of both Judo and Brazilian Jiu-Jitsu and how best to integrate them. Calling his school "Guerrilla Jiu-Jitsu", Camarillo began attracting students and awarding belts in both BJJ and Judo.

For over twenty years Dave had been involved in competitive grappling, but had been very aware of the rise of Mixed Martial Arts and even helped train fighters. In 2003, Dave Camarillo took the job of Head Grappling Coach at the American Kickboxing Academy (AKA) in San Jose, a kickboxing gym turning MMA.

AKA became the premier destination for NCAA wrestlers looking to add to their wrestling. For the last eight years Camarillo has worked with and trained fantastic fighters; including UFC Heavyweight Champion Cain Velasquez, Ultimate Fighter Contestant Josh Koscheck, and the #2 welterweight in the world Jon Fitch.

But even as he taught, Dave learned also. As he worked with elite wrestlers he began to add wrestling to his grappling knowledge and helped his fighters combine American Folk Wrestling with Judo and Brazilian Jiu-Jitsu. While Camarillo’s MMA fighters don’t seem to embrace his aggressive nature concerning submissions, they are feared grapplers none-the-less.

In the realm of competitive Judo, Camarillo was ahead of his time. Many Judoka’s remain close-minded towards expanding their ne-waza games, scorning Brazilian Jiu-Jitsu fighters as weaklings but the Camarillo brothers proved how effective BJJ technique could be even in high level Judo. And in sport Jiu-Jitsu, while many black belts had dabbled in Judo and earned black belts, Dave brought a Judo attitude to his training, much like Rolls Gracie. His unadulterated aggression and physicality surprised many opponents who where use to the relaxed, tactical flow grappling of many high level black belts.

In modern sport Jiu-Jitsu the technique on the ground at the highest level is nearly equal now, and often deciding world championship matches is standing grappling and physical condition. In this way, the Camarillo brothers were well ahead of the curve as they came from a grappling art that had embrace a sporting aspect long ago.

Together these brothers form one of the firmest bridges between two arts that once were reflections of each other but have grown into near mirror opposites. While competitive Judo is steeped in tradition and change comes slowly, if at all, Brazilian Jiu-Jitsu is still a dynamic, growing art. While it will always remain an art focused on the ground aspect, the stand up game becomes more and more important in Jiu-Jitsu competition and it is very possible, even likely, that one day all Brazilian Jiu-Jitsu will resemble Guerrilla Jiu-Jitsu.