Season Four of the Bellator lightweight tournament culminates tonight with a crack at champion Eddie Alvarez and $100,000 at stake, as 9-1 Patricky Freire squares off with undefeated wrestler Michael Chandler.

The card is rounded out by a sleeper bout between Russian kickboxer Alexander Shlemenko and Brett Cooper, which is a collision that has "Fight of the Night" written all over it.

Since the Anthony Morrison vs. Bryan Goldsby fight was nixed earlier, likely due to Morrison missing weight by a mile, I'm guessing the Anthony Leone vs. Jeff Lentz match-up will be upgraded to the televised portion.

Remember when BJJ black belts were all, "Ouch, stop punching me so we can just grapple and be like water!"? "Pitbull" Freire is a great example of the next generation of submission grappler, because amidst his strength, aggressive Muay Thai and propensity to finish with strikes (6 of his 9 wins), you'd never even guess he was a seven-time state and two-time regional BJJ champion.

Having a twin brother with the same first name and nickname, he was a shoe-in to train under the Nogueira brothers at Black House. On a serious note, we last saw Patricky in tears after his flying-knee KO of Toby Imada, emotional after his close friend and manager passed away shortly before the Rob McCullough fight in March. He's been another inspirational and exciting character that I've really grown to respect.

Michael Chandler was a D-1 wrestler at Missouri and has less than two years of MMA experience, garnering an impressive 7-0 clip and emerging as an equally promising lightweight from this season's tournament. This compact little wrestling juggernaut from Xtreme Couture was able to lift 5'11" Lloyd Woodard over his head and slam him, handing him his first defeat en route to the finals at Bellator 40.

With Freire's extremely diverse style, knockout power, and experience against McCullough, eventual UFC fighter Willamy Freire (Patricky's only loss), and his devastating KO of Toby Imada, I'm a little surprised that Chandler is favored to win.

He's unblemished and has looked amazing so far, but he's also relied heavily on his wrestling skills without really being tested. Freire will do just that, and in many areas. He's the best striker and grappler/submission fighter he's encountered, and even though Chandler has the better takedowns from outside, Freire is strong as a bull and crafty in the clinch.

I'll take the more comprehensive and experienced fighter for the upset in this one, who will also come fully prepared from a superb team to accommodate Chandler's fairly predictable strategy.

My Prediction: Freire by TKO

Check the rundown of the remaining match-ups in the full entry.

For those unfamiliar with Brett Cooper, just check out the first few minutes of his IFL fight with Rory Markham.

When knockout artist Markham, who's won 11 of 16 by TKO, softens you up with two clean punches before landing his trademark high kick, the normal reaction is not -- I repeat, not -- to return fire, take him down, and win the fight by TKO. Unless, that is, your name is Nate Diaz or Chris Wilson, who are both UFC-caliber.

Alexander Shlemenko is a deadly striker who has just recently come stateside to fight in Bellator, with the bulk of his career being spent in smaller promotions, mostly in Russia. Since dropping back-to-back fights to Jose "Pele" Landi-Jons and Ronaldo "Jacare" Souza in Brazil circa 2006, Shlemenko is 16-2 with only former UFC and current M-1 fighter Jordan Radev and Hector Lombard besting him.

While Shlemenko will clearly have the advantage standing, Cooper is also a game striker who can take a punch, and will be using his adequate wrestling and grappling abilities to keep things competitive. For whatever reason, even though Cooper's not a big name with a shiny record, the lines are much closer on this one, giving Shlemenko a slight advantage that I agree wholeheartedly with.

Look for Cooper to make this a fun fight and raise some eyebrows, but I do see the crafty veteran Shlemenko enduring whatever Cooper throws his way and exploiting his sharper striking.

My Prediction: Shlemenko by decision 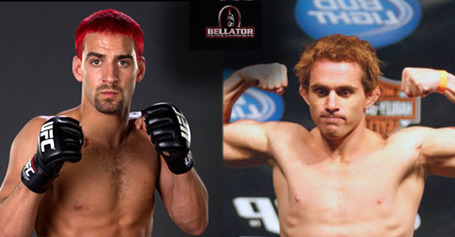 In a battle of New Jersey natives, Jeff Lentz, a member of Team Koscheck on TUF 12, takes on Team Bombsquad's Anthony Leone.

On "The Ultimate Fighter" Lentz was known for openly smoking cigarettes and drinking. He choked out Daniel Head to make it into the house on the first episode, but lost to Alex Caceres, aka "Bruce Leroy", via triangle choke. Lentz trains under Kurt Pellegrino on the Pellegrino MMA team, and is a feisty striker with knockout power in his hands and feet.

Anthony Leone is a burly little wrestler with good quickness, control, and punches from the top. He started off impressively at 8-0 and earned a shot in the WEC, but lost three straight:  to Renan do Nascimento Mota Pegado by armbar at WEC 49, to Georgi Karakhanyan by decision at Bellator 28, and to Josh LaBerge by TKO on the "Strikeforce: Fedor vs. Silva" card.

Lentz will have the height, reach, and striking advantage, and even though his ground game is quickly improving under Pellegrino, will probably have trouble dealing with Leone's strong wrestling.

Lentz has lost his last two and Leone his last three, so the need for a win on both sides will influence their performances. I think Lentz will unload on his feet and Leone will enforce his takedowns and top game, and a decision win for Leone is a safe assumption.

My Prediction:  Leone by decision