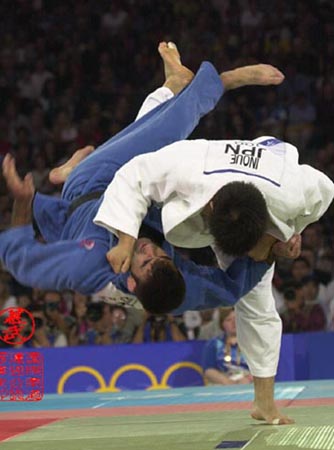 Traveling back to over 100 years before the first IBJJF World Championship or UFC, back to Kano Jigoro and his first Kodokan Academy. Kano had studied the many different styles of the Samurai art of Jujitsu and unified techniques under the concept of using momentum and leverage to defeat opponents with minimal effort. Kano called his art ‘the gentle way’, Judo.

This was just as Japan was moving to Westernize and the art of Jujitsu was quickly falling out of favor, as the ways of the Samurai were being outlawed. Kano was very concerned that Judo would also be viewed as just another style of Jujitsu. The decision was made that one path that could protect Judo was to add a sport aspect to the martial art.

In 1884 the Kodokan held its first tournament. Called the "Red and White Contests", it was organized by Kano who had both experience in Jujitsu matches and studied Western wrestling. He wrote the first set of competition rules and their goal was to allow students to spar against each other while simulating a real situation. These first rules outlawed striking in their matches and put the focus entirely on grappling. 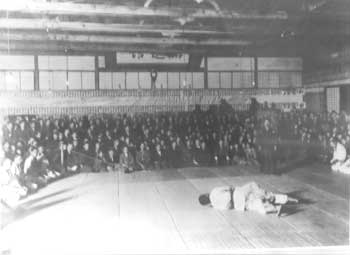 (The first Red and White Tournament, held at The Kodokan)

These original contests were best two out of three affairs and a match could be won several different ways. Applying a submission hold and forcing an opponent to tap out was one way. Another was pinning an opponent’s back to the mat for two seconds, a time long enough to draw a knife in Kano’s estimation. The final way to achieve victory was with a perfect throw, or Ippon, in which an opponent landed on his back and hips. Time limits were a matter of judgment by the referee, who often let matches go until there was a clean victory or a fighter was too exhausted to continue.

The Red and White tournament became an annual tournament that continues to this day, making it the longest running single competitive sporting event in the world.

As Kano oversaw more Judo competitions he began to amend the rules to help prevent injuries. By 1916, he had outlawed joint locks targeting the fingers, wrists, ankles and knees and the dojime, a kidney compression from the closed guard. While outlawed in competition, it does not mean that these techniques were not taught, just now allowed in competitions.

Competition in Judo continued to spread as Kano and his students traveled the world demonstrating the art. Schools became established in Cuba, Europe and Brazil. He became a transcendent figure in Japanese sport and in 1909 he was named to the International Olympic Committee just before the 5th Olympic games. In 1932, Kano and several of his students were able to give a demonstration at the Los Angles Olympic Games but it was not accepted as an official sport at this time.

During the early 1900s Kano also firmly established the ranking system. Under Kano’s system the journey from white to black belt is only the beginning. After receiving a black belt a Judoka begins working their way up the Dan rankings. Wearing a black belt represents the first 6 Dan rankings, with 7th and 8th Dan Judoka’s wear white belts with vertical red stripes. A 9th Dan is allowed to wear a solid red belt.

The rank of 10th Dan is the greatest honor that a Judoka can be awarded and only 18 judokas have been awarded the rank with the official recognition of the International Judo Federation, 15 of them hail from Japan.

But sadly Kano would not live to see Judo’s greatest period of expansion. In May of 1938, on the eve of the single greatest conflict of the Twentieth Century, the great Kano Jigro died of pneumonia at sea. Japan had already been at war with China for almost a year at this point and their allies in Nazi Germany and Fascist Italy were on the verge of launching offensives of their own.

The Second World War was defined by a staggering amount of death and destruction across the global and was ended by the two atomic attacks on Japanese cities.

But in Japan’s defeat was Judo’s victory. After the surrender of Japan, the United States Army occupied the islands with peacekeeping troops to oversee the rebuilding of Japan. These thousands of U.S. soldiers searched for ways to fill the hours of free time they had while they were off duty. Many began to wander into the many Judo and Karate schools spread across the Japanese homeland. 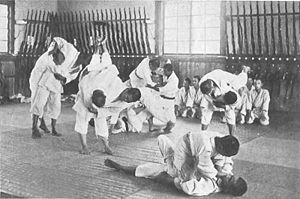 These soldiers would rotate home and bring with them the martial arts knowledge and many would go on to open schools. Judo exploded in the U.S. and across the globe during the 1950s and 60s.

In 1964 the Summer Games came to Tokyo, Japan and Judo was accepted as full Olympic Sport. Seventy-two judokas from twenty-seven nations came to the birthplace of Judo to compete for the title of Olympic Champion.

Judo would go on to become one of the most popular summer games events.

Competition Judo’s focus would become more and more focused on scoring points via takedowns and throws. While groundwork was never the primary focus of the art, it became more and more downplayed as the sport looked to become more spectator-friendly. Also as other nation’s Judo programs began to catch up with the Japanese programs, the Japanese administrators have slowly adjusted the rules to favor the more up-right Japanese style over some of the more wrestling-like styles.

The great masters of Judo should command every ounce of respect BJJ players give to greats like Rolyer Gracie, Roger Gracie or Robson Moura.