Heading into the main event, UFC 129 made a serious case for not just the greatest fight under the Zuffa banner, but the greatest MMA event of all time. Jose Aldo and Mark Hominick put on the eventual Fight of the Night in their fight for the UFC's featherweight title. Lyoto Machida sent Randy Couture to retirement and a tooth to the canvas with a crane kick of death. Of the eleven bouts, five ended by knockout, two by submission, and Rory MacDonald German suplexed Nate Diaz around the Octagon like an early-90s All Japan Pro Wrestling match.

Then Georges St. Pierre and Jake Shields entered the Rogers Centre to fight for the welterweight title. There's disagreement over where to place the blame (I believe that Shields' lack of urgency for a takedown hurt the bout more than anything else), but, as the proverb goes, it takes two to tango.

St. Pierre showcased the superior kickboxing that was an axiom for prefight analysis, controlling distance and utilizing his jab throughout the fight. Shields had no answer for St. Pierre on the feet, looking as awkward and ineffective as ever.

After round three, St. Pierre complained to his corner that he couldn't see out of his left eye. Cornerman Greg Jackson responded, "You've got one eye, you're fine."

St. Pierre continued to control the standup without the use of his lead eye. He lost the complete dominance that characterized rounds one through three, but Shields was unable to exploit the injury (if he was even aware of it).

The judges awarded St. Pierre a unanimous decision with one judge scoring every round for the champion. The two other judges saw the fight 48-47 for St. Pierre.

The hometown Rogers Centre crowd lacked the same level of enthusiasm for St. Pierre's victory prevalent for the other Canadians on the show.

Fighter of the Night 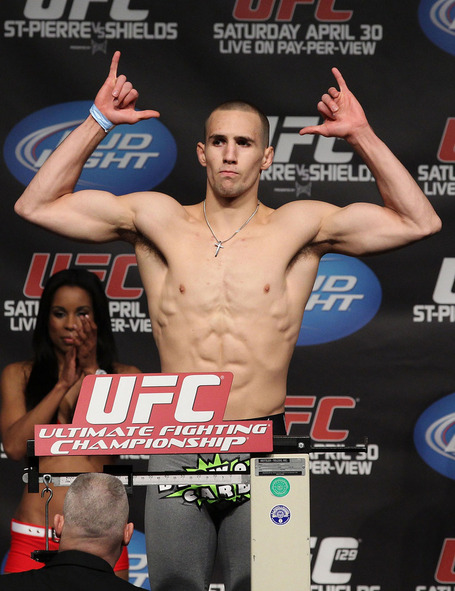 Lots of contenders tonight, but I don't think anyone did more to increase his stock than Rory MacDonald in his victory over Nate Diaz. MacDonald outclassed Diaz throughout the bout, and capped that with a series of huge slams that brought a huge rise from the audience at the Rogers Centre. It's hard to imagine that MacDonald is still only 21 years of age, but he looks to have rebounded from a tough loss to Carlos Condit.

Moment of the Night

Not only is this the last moment in Randy Couture's professional fighting career, it's also a serious contender for knockout of the year.

Mike Goldberg Line of the Night

"Mark Hominick may have to finish this fight, Joe."

Likely down 4-0 heading into the fifth round, Mike Goldberg noted that Mark Hominick probably needed a finish to win the bout. Now, the sentiment behind the statement is correct. However, it's the lack of conviction that bothers me. Goldberg is so reluctant to say anything negative about any UFC fighters that it affects his ability to relay the narrative of a fight.

Entrance Song of the Night

It was hard to hear a lot of the music tonight, and a lot of the entrances for the Facebook prelims were cut from the stream. So, here's Red Rider with "Lunatic Fringe" which is featured on the soundtrack for Vision Quest, a movie I am told is must-see.

Despite Dana White's assurance that Zuffa needs more fighters, there's no margin for error in the UFC. It only takes one loss to find a pink slip waiting for you on Monday morning. Who's on the Chopping Block?