Promoted from the FanPosts by Kid Nate 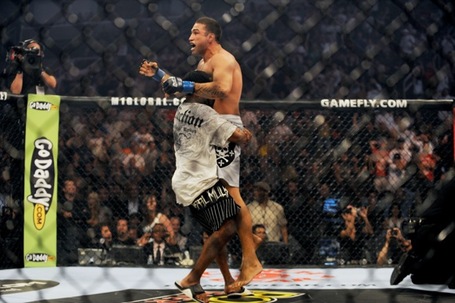 After the UFC bought Strikeforce, I find it difficult that the GP will go all the way until the end. It’s my opinion, but I don’t think the UFC will invest in a tournament such as this to take attention away from their fighters.

From R7 Esportes, rest of interview after the jump.

In June you’ll be participating in the first round of the Strikeforce GP, how are the preparations going? Did the postponement of the fight have an effect on your training?

Fabrício Werdum – I’m doing well, I’m training a lot. To be honest, the postponement was bad for my training routine because we always have a schedule of two to three months with all the sessions pre-defined. In this sense it was bad because it broke my rhythm, but I always try to look at it on the good side and, in this case, I will have more time to train and prepare for combat.

You will be facing Alistair Overeem, who you beat in 2006. Does this make you more relaxed?

Werdum – Yes. A lot of people say he has improved a lot since, that "this and that", but I have also evolved. I have improved my ground game, my physical strength and my stand up game. In fact, I have just received my black belt in Muay Thai from Rafael [Cordeiro]. So, I focus on my potential, and I don’t care for what [people] say.

Winning this fight you’d be facing Big Foot in the next phase [of the GP], but many people don’t think the GP will go until the end since the UFC bought Strikeforce, what do you think?

Werdum – After the UFC bought Strikeforce, I find it difficult that the GP will go all the way until the end. It’s my opinion, but I don’t think the UFC will invest in a tournament such as this to take attention away from their fighters. I hope to be wrong, but that’s how I see it.

In case the GP does not go until the end, it is to be expected that the top fighters from Strikeforce will migrate into the UFC. You have fought there before, do you ever think about going back? Did you leave the promotion in good terms?

Werdum – No, I left in good terms actually. We just didn’t come to a financial agreement. They asked to lower my pay rate and I did not accept that. I had just lost to [Junior dos Santos], I was not in a good phase personally, and I opted to not lower my pay rate. I ended up going to Strikeforce.

Regarding your fight with [Junior dos Santos]. I remember that you said something before the beginning of the fight that he didn’t take it too well. Was there any rivalry between you two?

Werdum – There is no rivalry. In the beginning of the fight I said I was going to break his face. I was trying to take his focus away because I was not in my best conditions. But it ended up that he broke my face instead [laughs].

After beating you, [Junior dos Santos]has been going through a great phase, if he beats Brock Lesnar he should be fighting for the belt. Did you know he was that good when you faced him?

Werdum – no, but it’s good that he is, right? [laughs]. I’d be pissed if he beat me and then lost his next fight. My dream in 2011 is winning the GP then challenging the UFC HW Champion. If that happens to be [dos Santos], that’d be even better, and from there we’d have a rematch. That would be the perfect year.

How is your training in the US going?

Werdum – man, it’s really good. Rafael [Cordeiro] has an impressive vision. He works together with all his students at the same time, he studies you and will point out the necessities for each depending on their game. Training with him gives me more motivation. So much so that I, Wanderlei, Shogun, we all come to train with him now, we all like to learn from him.

Werdum – Yes, it’s incredible. At the moment we have Ishii, who is an olympic Judo Champion, Renato Babalu, Wanderlei Silva, Vladimir Matyushenko. In conclusion, it’s a big and strong team. My only problem is that I have to travel 80km everyday to train in Huntington Beach with Rafael Cordeiro. Tuesdays and Thursdays I have to travel even more to train with Mark Munoz. Since everyone has their own academies, we sometimes train in each other’s academies, but we’ll meet more at Kings MMA. the guys knows the training there is good, technical and strong. So more and more people will go to Kings MMA.