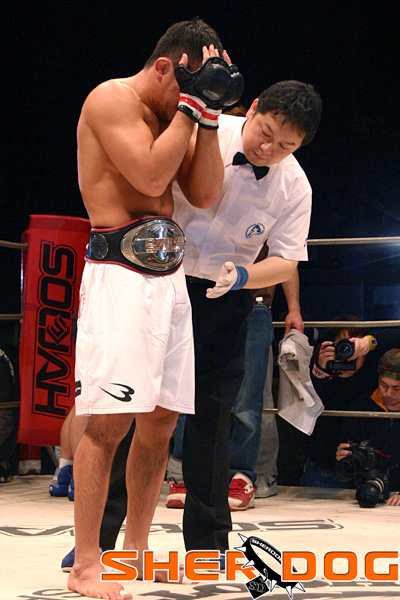 August 21st, 2004 was a big night for MMA as much as it was a frustrating one. Vitor Belfort vs. Randy Couture III. For Belfort it was a chance to validate the freak accident at UFC 46. The Supernatural card was as tough a fight as I can imagine any athlete has ever had to endure: January 31st was only 2 weeks removed from the disappearance and kidnapping of Belfort's sister. The universe appeared to unfold sympathetically for Vitor that night, as he would be granted the belt off an improbably placed cut. At the time, the media didn't care about the controversy. We all collectively accepted that it was nice to see Belfort feel like a champion in the face of tragic circumstances, regardless of whether or not he deserved it. And on to 49, where he'd lose the belt off a grinding decision victory for Couture. At the same time, Yves Edwards vs. Josh Thomson was happening on the undercard. It was an excellent fight, and it was capped by one of the greatest knockouts of all time. It was also the last fight at 155 in the UFC, and would be until 2006.

On top of Edwards vs. Thomson being good, it was also highly relevant. The LW division and its prestige in the UFC essentially disappeared at UFC 41 when Caol Uno and B.J. Penn fought to a draw. Uno performed well, scoring takedowns from the clinch, and keeping up with Penn, although I felt like Penn clearly won 3 rounds, but it was all for naught. The title would be vacated, Uno left for Japan, and Penn jumped divisions, and eventually the UFC. Edwards and Thomson were therefore the best and brightest. And both were in some classics before eventually clashing (both defeated the then heralded Hermes Franca in decisions that were also both controversial). Pride would eventually introduce their Bushido series, which had made its debut before UFC 49, but didn't start to pick up steam until shortly after. Both Edwards and Thomson would make appearances at the Bushido appearances.

Most bits of MMA history are underscored in digital bickering. There was always the guy on your right, who acted as if anything that ever happened outside of the US was worthless. Unless those fighters fought in towns dominated by rebel flags, and science classrooms teaching intelligent design, then who cared? And then there was the guy on your left. He thought phrases like "Zuffa Zombie" and 'TUFer" were clever, and any UFC fighter's value could only be measured by whatever Zuffa's "hype machine" could produce. If you ever discussed LW rankings in this era, this was the idiotic tug of war you'd find yourself involved in. But for a time, the only game in town for LW relevance was in Japan.

Tatsuya Kawajiri has always been an "anomaly" against the stereotypical Japanese fighter: he cuts a sizeable amount of weight, has raw power in his hands to support his effective boxing, and effectively grapples with top control supported by elite wrestling (also is one of the better guard passers in the game). Between 2002 and 2005 were Yves Edwards' best years, and Kawajiri gave him one of those rare losses in that time. Japan had a pretty structured hierarchy in these days: a hierarchy established from 02' to 04' in Shooto before Bushido poached most of its roster. These were the early stomping grounds of LW contenders like Takanori Gomi, Joachim Hansen, Caol Uno, Rumina Sato, and Vitor Ribeiro.

For those that either forgot, or don't know, Vitor 'Shaolin' Ribeiro used to be a very very feared man. Before his rise to the top of Shooto he was a veteran grappler (multiple time CBJJ champ), and had some absolutely classic wars with Leo Vieira in places like the Mundials, and ADCC. At around the same time the UFC had officially let go of their LW division, Shaolin was undefeated. He was 10-0, and one of the very best LW's in the world. By default, you could have said he was the best LW in the world. He had beaten Kawajiri (who dominated Edwards), and had choked out Joachim Hansen after Hansen beat Takanori Gomi for the Shooto World Welterweight Title. Shaolin was the LW king of Shooto, and before Shooto's 2004 Year End Show, he had beaten Kawajiri's stablemate, Mitsuhiro Ishida. Ishida, despite being thought of as a dominant wrestler was embarrassed by Ribeiro on the ground, and it was this fight where Ishida would be labeled "unsubmittable" by his fans (Ishida had no business getting out of a straight armbar from mount in one round, although Uno would change this "perception" of Ishida). In December of 2004, it could be said there was a lot at stake: Kawajiri wasn't just fighting for the pride of T-Blood (Kawajiri got hosed on the ground too), for himself as well as his teammate to avenge both their losses, but for the claim of the world's best LW.

The rematch started out in lackluster fashion. A lot of neutralizing in the clinch, and a few timid exchanges on the feet. The 2nd round started, and Kawajiri caught Shaolin early. Not a big punch, but it got Ribeiro's strict attention, and Kawajiri would proceed with an extended beating from top control over what felt like an entire round's worth of punishment. When Kawajiri was awarded the belt, his response could only be communicated in tears (as seen above). Kawajiri was the king of Shooto, and emphatically so. He was champ of an organization that sharpened its fighters with competition between the true (and then) elite. However, a match with Takanori Gomi (who many felt, myself included, won the title fight with Hansen) still eluded him.

Read a few more paragraphs and listen to Kawajiri's theme song over at Head Kick Legend.