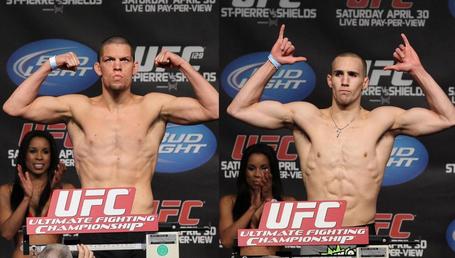 In what should unwind as wickedly gratifying brawls, Spike TV treats us to two UFC 129 preliminary fights with Nate Diaz vs. Rory MacDonald and Jake Ellenberger vs. Sean Pierson.

It is common knowledge that by signing a contract to fight one of the Diaz brothers, you are thereby officially insulting them, their entire family tree, and maybe even our country's forefathers. From that point on, you can expect endless mean mugs mixed in with a little flexing, a lot of general unpleasantness, and eventually, a very exhausting night in the cage. Only a prime Hermes Franca was able to finish a green Nate Diaz, as every other loss on his 13-6 record came by decision; all highly competitive ones at that.

Never before has MMA seen such base anger and aggression fused with such graceful and abounding talent in a wide range of martial arts (though B.J. Penn deserves a mention). Combine a silky smooth guard; cunning sweep and scrambling abilities; a mesh of sharp Muay Thai and slick Judo skills in the clinch; an unorthodox but technical preying mantis style boxing game interlaced with stiff kicks; and the fearless bloodlust of a technical streetfighter -- and you have Nate Diaz.

Were it not for a red-faced and emotionally inspiring "This is war!" tirade from the normally complacent Greg Jackson to light a fire under Carlos Condit's ass going into the 3rd, rising Canadian talent Rory MacDonald would probably still be undefeated. Nevertheless, the 10-1 youngster suffered his first loss in his biggest test to date at UFC 115 when a rejuvenated Condit stomped on the accelerator and scored a TKO stoppage with only a few ticks left on the clock.

Despite winning the first two rounds and likely being just seconds away from surviving with an unblemished record, MacDonald showed a likable attitude and pure class by shaking Condit's hand and accepting the loss without complaint. He also validated his potential by giving the well-rounded MMA vet and former WEC champion all he could handle on the feet and on the ground at a mere 20 years of age.

Presenting a rare equality in height and reach for Nate Diaz, Rory MacDonald's gangly frame facilitates his crushing counter-punches and raw takedown skills, and backed by the roaring crowd as the hometown favorite, should offer the forward-moving style to give Diaz a formidable challenge and the fans an exciting spectacle.

Breakdowns of this and the Pierson-Ellenberger scrap are after the jump.

I'm sure I'm not the only one that was utterly shocked when, against Condit, the grappling-based newcomer MacDonald didn't dive desperately for takedowns or backpedal nervously, but calmly stalked him and either drove hooks and straights through his guard or patiently waited for openings to put him on his back. Struggling just a little with Condit's kicks from outside, once MacDonald got in the pocket, he was actually the more accurate and efficient striker against one of the better Thai practitioners at welterweight.

MacDonald showed a stiff left jab and tight boxing all around, along with an uncanny ability to dictate the pace through relentless pressure. He caught almost every knee and kick Condit threw and punished him for it in one way or another.

Condit is a great litmus test because of his similarities to Diaz in length, striking, BJJ, and mediocre wrestling. Based on how Macdonald performed against him, the same strategy is in line with the type of fighters that were able to out-maneuver Diaz in the past: solid wrestlers with good counters, takedowns, and submission defense that pushed the pace in the right spots.

While the wide-based and inimitable striking style of Diaz is difficult to decipher, the best way to stifle it has been to economically bore strong counter-punches to disrupt his ongoing stream of pawing strikes, and halt him with takedowns or by shifting gears and making him clinch.

As extraordinarily enjoyable as his striking is, Nate gets in trouble for keeping his feet planted too often and for too long, making his lower body a predictable target even though everything flying around from the waist up is a mystery. He's also always been willing to take a few to give a few, and with a wise choice of effective attacks, these habits have allowed his foes to steal the wind from his sails with a memorable blow on the feet or taking control with clinch-work and takedowns.

Even though MacDonald surprised me on the feet against Condit and I could be underrating him, the edge goes to Diaz with a disclaimer on footwork. If Nate stays stationary and peppers with a high volume of low-force punches, MacDonald will probably never let him find his groove and punish him for being a habitual slow starter.

If Nate has accepted -- no matter how contradictory to his "warrior's spirit" it may be -- that the best way to win rounds (without a stoppage) is to keep the momentum and stuff with double-unders to stay on his feet, he has the more complex and volatile striking game.

MacDonald has been a wrecking machine in the clinch, and makes it look easy. He includes everything from trips, throws, bodylock takedowns, singles and doubles from outside, catching and leveraging knees and kicks that are tossed his way, and even simply throwing his opponent down like a schoolyard bully.

Rather than smacking of a distinct foundation of freestyle, Greco, or Judo, MacDonald seems to rep the new generation of just using great balance, instincts, quickness, and overall technique to nail takedowns in a variety of ways.

I believe this is his single biggest strength, because his improved boxing and quick reactions make him an ever approaching whirlwind of long punches and stultifying tactics. The way he integrates his adequacy in striking, clinching, and grappling makes him an active threat in all areas and at all times.

This gives MacDonald the proverbial steering wheel of the fight, which is just how Diaz has fallen on the score cards historically. By swallowing the momentum and forcing his opponent to defend, the result is mounting offense and notching points for control and aggression.

Diaz is willing to duel wherever the fight goes, and has incredible Judo and submission counters on the ground and in the clinch -- the problem is that, unless he does major damage or draws a tapout, his foe is looked upon favorably by the judges for "imposing his will". When offense is comparable but control is clear clenched by one fighter, the cards are usually tilted in the latter's favor.

It's worth noting that one of Diaz's favorite tactics in the clinch or to deal with the waist-cinch is the kimura counter, and that is the exact technique that initiated Condit's victorious sequence against MacDonald. Nate is craftier in the clinch, but I think the strength and intelligence of MacDonald makes him a beast here.

Diaz will punch you square in the face and then raise his hands in the air with a defiant expression of "How'd you like that, son?" or somehow string together a flex to double bird-flip combo to kick off his victory celebration while you're still trying to squirm out of his suffocating triangle choke.

He has an extremely technical and slippery guard with excellent defense against ground and pound. Unfortunately, the same idea applies -- he almost has to finish in order to capitalize on his unreal talent. Playing guard will lose you the round unless you sweep or submit, and MacDonald performed with a skill that defied that his experience against an esteemed submissionist like Condit.

He escaped a stream of leg locks and even pulled out a few tricks of his own. Where he showed a glaring weakness was on his back, but it's hard to tell if that was due to strikes Condit fed him on the feet, an issue with cardio, or a lack of skill. I would conjecture confidently that Nate's best chance for a finish is from the top, but I also feel that position is the least likely to occur.

MacDonald seemed to have the knack to steer clear of subs, knowing when to strike, posture up, or pull back, and unless Nate can sweep and get on top, I think MacDonald will have the advantage in combat, and know he'll have it on the judges cards.

Yes, as you may have guessed, I'm biased toward Diaz, but tried my best to give an objective list of his weaknesses. To make up for it, given all the ways MacDonald embodies the type of fighter able to beat both Diaz brothers by decision, that's the likely result of this fight. Unless Nate can finish him, the safe and logical pick is MacDonald on the cards.

Personally, I never watch MMA from a safe and logical standpoint. So, fully allowing my heart to muffle what my head is mumbling, I'll take Diaz by a comeback TKO even though it's a long shot.

My prediction: Diaz by TKO

Now, for all the wrong reasons, I'll have to fly through the Jake Ellenberger vs. Sean Pierson bout, assuming only that their brutal boxing will offer a pleasurable mutual bashing.

I'm a little bitter at Jake Ellenberger for blasting out a Vale Tudo legend like Jose "Pele" Land-Jons in just nine seconds and still expecting to gain fans. That was just rude and uncalled for. Some of us have very fond memories of Pele humping a turtled Jorge "Macaco" Patino's head.

I'm finally getting over the offense, and have come to appreciate and respect Ellenberger as one of the lurking hammerheads in the 170-pound tank. Explosive wrestling, a brick chin, and ungodly powerful boxing alone make Ellenberger a cumbersome adversary for any welterweight.

Canadian Sean Pierson has a very odd background in that he first debuted in the IFC promotion and racked up a 3-3 record from 1999 to 2003, with John Alessio, Steve Vigneault, and Chad Saunders accounting for his losses. Reappearing in 2007, Pierson has since notched a moderately paced but impressive 7-1 clip, the last being an enthusiastic stand-up mauling of Matt Riddle at UFC 124.

Pierson has alarming quickness and airtight combinations from southpaw that will make for a wonderfully violent contrast with Ellenberger's heavy-handed boxing. This fight is almost guaranteed to be a frenetically paced slobberknocker with haymakers aplenty.

That's not to insinuate a lack of technique; just that they both have a lot of power and prefer to stand and swing for the fences.

Ellenberger is the better wrestler, but it was said on the broadcast in Pierson's fight against Ricky Goodall that he's a big weight cutter and balloons back up to 190-ish on fight night. The Canadian has a good top game and overall BJJ and wrestling knowledge, but most of the time he's on the ground is because he's just walloped his opponent with punches standing.

I think either fighter that finds himself on his back will face a serious disadvantage, though I expect most of this brawl to play out on the feet. Pierson has a slight edge in technique, footwork, and quickness, but Ellenberger has a little more beef on his punches. On the ground, Ellenberger is only a blue in BJJ but his rugged wrestling, sub defense and heavy hands atone for the deficit.

Though the odds slightly lean toward Ellenberger, who is almost always a live underdog, Pierson might be an unforeseen twister here. The fighter that draws first blood on the feet should be able to pounce and pound out a finish.

This is a pick em' for me, but Ellenberger's wrestling should be the difference. I think he'll pull off another close one after taking a heaping dose of punishment. I'm speculating that a sub will come after clipping Pierson with punches, but the safest route is to shoot doubles during heated exchanges and clobber from the top.

My prediction: Ellenberger by submission

All gifs from "Caposa" and MMACore.com