Share All sharing options for: Diego Sanchez Faces Matt Hughes in the Fall 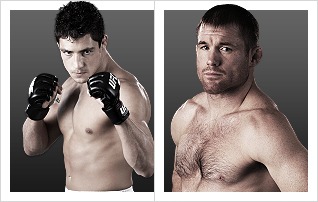 Diego Sanchez has been clamoring for a big fight and in the past has talked about wanting to face Matt Hughes. He'll get his wish this fall. Via UFC.com:

"A matchup between two welterweight fan favorites has been verbally agreed to as Diego 'The Dream' Sanchez will face former UFC welterweight champion and Hall of Famer Matt Hughes," said UFC President Dana White. "Sanchez is coming off of a Fight of Night winning performance against Martin Kampmann and Hughes is looking to add another great victory to his incredible UFC career."

Since dropping two fights in a row, Diego is on a two fight win streak with victories over Paulo Thiago and Martin Kampmann. Both of those fights won Fight of the Night. Hughes had his three fight win streak snapped by the powerful punches of B.J. Penn, dropping their rubber match in just 21 seconds.

It is unusual to see the UFC go with a match-up of a guy on a win streak against a guy coming off a bad loss, but the UFC could use some more fights between "recognizable names" over the late summer/fall period and this fits the bill.