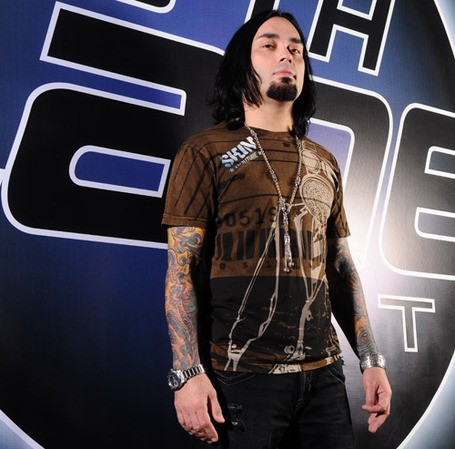 Eddie Bravo is one of Brazilian Jiu-Jitsu’s most controversial figures; some regard him as a creative genius while others call him a semi-successful fraud. Outspoken on marijuana laws in the U.S., a fan of Kung Fu movies and an aspiring musician on the side, Eddie Bravo is a man of many pursuits, but none more famous that the development of his own style of Jiu-Jitsu.

To understand Eddie and his take on the martial art, we must look at his teacher, Jean-Jacques Machado.

Jean-Jacques is one of five Machado brothers, all of them black belts under Carlos Gracie Jr., their cousin. Jean-Jacques was born with Amniotic Band Syndrome, which is a disorder when a fetus’ limbs fail to develop normally, and in his case it resulted in Machado not having any fingers on his left hand. Because of this when learning to grapple he couldn’t make extensive use of gi gripes and had to rely heavily on under and over hooks to control opponents.

As a result Jean-Jacques, while an able gi grappler, became an elite no gi grappler. In the early 2000s he won a gold and two silvers in three trips to ADCCs. His academy in Southern California is one of the oldest U.S. schools, home of over 32 black belts.

In 1994, Eddie Bravo was a young twenty-something martial arts enthusiast who had wrestled in high school when he walked into Jean-Jacques Machado’s academy. Bravo quickly soaked up Machado’s unique style of jiu-jitsu, training in the gi and out of it.

Bravo began drawing on his wrestling background, remembering a pinning maneuver called the guillotine and the extreme pain it caused. Bravo began experimenting with this maneuver to submit opponents, renaming the move "The Twister" so not to confuse it with the guillotine choke. He also began experimenting with what would become the Rubber Guard. Bravo was an avid competitor and began to incorporate his creativity in competitions.

In late 2002, Bravo entered the North American Trails for the ADCC Submission Grappling Tournament, a qualifier for the toughest no gi competition in the world. Bravo finished first, winning a cash bonus for the "Most Technical Fighter of the Night" Award.

So Eddie Bravo, not yet a black belt, traveled to Sao Paulo in 2003 to take part in the ADCC 65kg bracket. Bravo’s first match was against Gustavo Dantas, which sadly was not tapped, but Bravo was able to win via rear naked choke.

In his next match Bravo was faced with one of the greatest grapplers from the 1990s, Royler Gracie. At the time Royler was a four-time Mundials champion and two-time ADCC champion, no one had ever even scored a point against Royler at ADCCs before this match.

Their match ended up becoming an all time classic, as Bravo was able to secure a triangle choke, becoming the first American to force a Gracie to tap.

Eddie then lost his semi-final match against Leonardo Vieira and his bronze medal match against Alexandre 'Soca' De Freitas, but it was an impressive showing for a brown belt. His victory over Royler Gracie sent shockwaves through the jiu-jitsu community and made him an instant celebrity.

Upon returning home Jean-Jacques Machado awarded Bravo his black belt, and Bravo wanted to use his newfound celebrity by starting his own school.

Bravo wanted to explore the full potential of the positions he had been experimenting with, but he also had a fascination with MMA. His friend and fellow student of Machado, Joe Rogan had become a commentator with the UFC and helped Bravo get a job on the TV production side. As a result, he had front row seats to the evolution of MMA and the decline of the dominance of Jiu-Jitsu fighters as wrestlers began to enter the sport and train to defend against jiu-jitsu.

Bravo theorized that the problem was that Brazilian Jiu-Jitsu had imported the gi from Japan and that the art was overly reliant on the gi. To move jiu-jitsu and keep it competitive in MMA, Bravo decided that he would explore his creativity in the realm of no gi only.

So Bravo traveled to Hollywood and opened his own Jiu-Jitsu school in Legends MMA gym and started developing his own style of no gi Jiu-Jitsu.

He named his style 10th Planet Jiu-Jitsu, and it was predicated on using flexibility and unusual positions to control and submit opponents. One of the central positions of Bravo’s new style was the rubber guard which uses grips on the legs, in the absence of gi grips, to control an opponent’s posture.

Many of the old guard from Brazil scoffed at the rubber guard, claiming it was just the "high guard" renamed. While the rubber guard certainly was developed from the high guard, Bravo systemized it in a way that no one else had.  Similarly Bravo modified the reverse Kesa-Gatame into the Twister Side Control to form another core position of his emerging style. Again he didn’t invent the position it has existed as a pinning position in Judo again he and his students systemized the position and modified in a way Judo never had.

Eddie’s school is still very young, in 2009 he award his first 10th Planet Jiu-Jisu black belt to Denny Prokopos, who then became the first 10th Planet representative to medal at the IBJJF No Gi World Championships with a bronze. He also has several MMA fighters as students, most notably Shinya Aoki who he has given lessons to but no official rank in 10th Planet.

Now there is a line around the block to criticize 10th Planet Jiu-Jitsu and its founder and much of it is unfair or uninformed reaction to Bravo’s bold statements. Many attack Bravo for renaming positions and trying take credit for them. This is not an act of ego on his part, rather a strategic move. By naming each and every position and transition Bravo can quickly communicate to students in competitions what he wants them to do without tipping off an opponent.

But there are fair assessments of his style, and one of them comes from Eddie’s own instructor Jean Jacques Machado. First it must be said that Machado is still good friends with Bravo, loves training at 10th Planet and loves that his student isn't afraid to rock the boat.

That said Machado thinks the gi serves and important purpose in training, namely it slows down the grappling, giving students time to think and forces them to learn techniques. Machado says that he is always able to tell which of Bravo’s students have trained in gi jiu-jitsu when rolling because he is able to blow through the defenses of the students who never put on the gi. Guard passing happens so quickly in no gi it’s hard to build the fundamentals of guard retention at the speed, so it takes longer to develop training just without the gi.

That said, it cannot be denied that Eddie Bravo has made substantive additions to the universe of Brazilian Jiu-Jitsu.

The Rubber Guard, the Twister side control and the bevy of odd submission holds that the 10th Planet school has developed are just as legitimate innovations as the Butterfly Guard. Eddie’s bold style and that fact that he isn’t Brazilian and was innovating at time the art was dominated by Brazilian black belts is likely to blame for his techniques not being as accepted as Marcelo Garcia’s X-Guard.

Eddie Bravo will remain a controversial figure in the world of Jiu-Jitsu, and feel free to question and debate his views on the art, but don’t ever doubt his grappling ability because you’ll likely find yourself tapping.

I don’t know Eddie Bravo personally and did not speak to him in the writing of this article. I pieced this together this article based on sources online. Reliable sources were difficult to find and I had to rely on Wikipedia and posts on the 10th Planet message forums by instructors more than I’d have liked. If you are a student of 10th Planet please feel free to share your insight.

1. Birth on the Battlefield
2. The Meiji Era and the Evolution of Judo
3. Judo Travels the World and Maeda Meets Gracie
4. Baptism By Fire and Luta Livre
5. The Tragedy of Rolls Gracie
6. Coming to America and the Birth of the Ultimate Fighting Championship
7. The Gracies Leave the UFC and Bring Jiu Jitsu Back to Japan
8. Carlson Gracie, The Grandfather of Jiu Jitsu in MMA
9. The Rise of Sport Jiu Jitsu