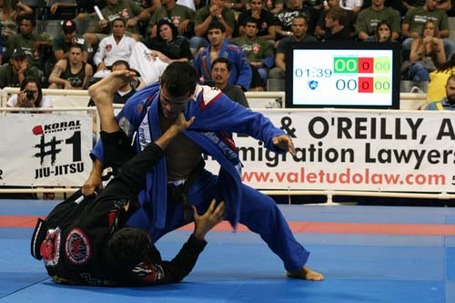 The 1990s saw the birth of the UFC and Pride, both in part due to the Gracies’ efforts to spread awareness of Brazilian Jiu-Jitsu. The sport of MMA was a huge success and growing quickly, but so were student populations at Brazilian Jiu Jitsu schools all over the world. The martial art was expanding faster than at any point in its history, and with out oversight it could quickly splitter apart.

While Helio Gracie’s side of the family had been focused on spreading the family art, it would be the son of Grand Master Carlos Gracie who would prepare Brazilian Jiu-Jitsu for this influx of students. Carlos Gracie Jr, known as Carlinhos or “little Carlos” to his family, trained primarily as a child under his uncle Helio but as he grew older he became a student under his brother Rolls. After Rolls’ death, Carlos Jr began to study under his father and teach at Rolls’ old academy.

Carlos Jr. wanted to make his own mark on the world so he traveled to a neighborhood in Rio called Barra da Tijuca, where he founded his own academy. He named the school Gracie Barra and went from just under 20 students to over 200 in one year.

Carlos had taken Rolls’ belief that competition bred excellence to heart and felt that in order for Jiu-Jitsu to keep pushing forward that high-level competition was the essential. In the early 1990s there were many competitions, but they mostly took place on the regional level or were a school-vs-school event; there were no consistent international competitions that brought the best BJJ players together.

Its first goal was to the combat the problems that were the inevitable result of quick expansion of a martial art. The explosion of Karate in the United States during the 70s and 80s was a cautionary tale to many martial arts. Regulation had struggled to keep up with the expansion of schools and as a result there were many cases of fraud and illegitimate belts being awarded. Karate suffered an image crisis after its meteoric rise as local news began to feature stories about a local “karate master” being exposed as a fake. And all this bad press made things that much harder for the legitimate Karate black belts to run schools.

The IBJJF was to get out ahead of this potential problem by serving as a body that would set minimum training requirements for belt promotions and certification of promotions. Also, age minimums were set to avoid 12-year-old black belts, which are a constant point of giggling to critics of martial arts.

While not all schools accept the IBJJF standards for belt promotion it did serve an important purpose, to give all Jiu-Jitsu schools a benchmark. Before the IBJJF, time between belt promotions varied widely between schools, some kept students as white belts for almost two years while others promoted them after 10 months, some used stripes while others did not. Now the majority of schools are close to the standards laid down in 1994 by the IBJJF.

The IBJJF also set out to establish clear rules on scoring, awarding competitors:

- 2 points for a takedown, sweep or gaining the knee on belly position

- 3 points for passing the guard

- 4 points for gaining the mount or taking the back.

With the rules and regulations set the IBJJF held its first World Championships in 1996.

During this early period the first great rivalries emerged. Carlos Jr’s own Gracie Barra quickly became one of the most successful schools with great champions like Marcio Feitosa and Roberto "Roleta" Magalhães. Alliance Jiu-Jitsu founded by Rolls Gracie black belt Romero “Jacare” Cavalcanti and one of their first champions Fabio Gurgel, rose as the principle rival to Gracie Barra.

And the Gracies were not about to be left out this; the Gracie Academy on Humaitá Street in Rio became the training center for their competitors. Royler Gracie, Saulo and Xande Ribeiro became the standard bearers for Gracie Humaitá.

Nova Uniao, Carlson Gracie and other schools also entered the fray. Each year venues filled with students and sparring partners to root on their instructors, creating very partisan crowds and amazing atmospheres.

While the original powerhouses of Gracie-Barra, Alliance and Gracie Humaitá are still winning titles they have been joined by a score of elite schools and teams: Atos, Check Mat, Brasa, Gracie Competition Team and many others.

By the mid-2000s the Mundials, Pan Ams and European Open were considered the three most difficult gi Jiu-Jitsu competitions in the world.

While gi grappling was the initial focus of the IBJJF, the man who push no gi grappling forward would hail from the United Arab Emirates (U.A.E.). The Sheik Tahnoon Bin Zayed Al Nahyan of U.A.E. was going to school in the United States in 1993 and witnessed UFC 1 on TV and fell in love with MMA, particularly the grappling aspects. Sheik Tahnoon continued to watch MMA as they added rules banning the gi.

Sheik Tahnoon began training in jiu jitsu and loved no gi grappling. He decided he wanted to use his resources to match the best no gi grapplers against one another. He founded the Abu Dhabi Combat Club (ADCC) and set out to host the finest no gi tournament.

The ADCC Submission Grappling Tournament debuted in 1998 and attracted the very best of the grappling world by offering cash prizes for the winners. This represents a significant shift, as the IBJJF does not offer cash prizes to winners or any award aside from the title of World Champion. World level jiu jitsu competitors use sponsorships to break even on travel, equipment and registration expenses and the actual money comes from using success to open an academy and hit the seminar circuit. Sheik Tahnoon wanted to move towards allowing competitors to become true professionals.

ADCCs have become the ultimate proving ground for no gi grapplers of any background: shoot, wrestling, luta libre, judo, sambo and even sumo. But Jiu Jitsu has dominated; fighters with BJJ backgrounds have claimed 139 ADCC medals to date. Renzo Gracie would win the 77KG weight class at the very first ADCC in 1998 and the 2000 tournament and had an excellent match with Marcelo Garcia in 2003. He would become a fixture in UAE jiu jitsu, giving private lessons to Sheik Tahnoon.

By the early 2000s Brazilian Jiu Jitsu had a thriving sport scene that rivals the other major martial arts, even the Olympic arts like Karate, Fencing, Judo, Taekwondo and Wrestling. But this has caused some division in the Jiu Jitsu community.

There is a very strong contingent, figure-headed by Rorion Gracie, that believes a sporting aspect weakens Brazilian Jiu Jitsu by taking it away from its core value; self-defense. They claim that the art has been turned into a game with the goal of scoring points in an allotted amount of time against an opponent of a similar size. That a person can become regarded as an elite black belt now with out ever learning how to properly defend against a punch.

Supporters of sport in Jiu Jitsu point to Rolls Gracie original assertion that competition would force the art to keep evolving as a reason why it is vital to keep competing.

Without the huge expansion of international competition there would have never been the explosion of new techniques: Butterfly Guard, Spider Guard, X Guard, De La Riva Guard, Deep Half Guard, 50/50 Guard, the D’arce Choke, the Anaconda Choke, and a whole slew of gi chokes all were developed to gain an edge in competition.

It remains as strong division in Brazilian Jiu-Jitsu as schools choose to focus on self-defense, sport or MMA, while others try to accommodate all three.

1. Birth on the Battlefield
2. The Meiji Era and the Evolution of Judo
3. Judo Travels the World and Maeda Meets Gracie
4. Baptism By Fire and Luta Livre
5. The Tragedy of Rolls Gracie
6. Coming to America and the Birth of the Ultimate Fighting Championship
7. The Gracies Leave the UFC and Bring Jiu Jitsu Back to Japan
8. Carlson Gracie, The Grandfather of Jiu Jitsu in MMA
9. The Rise of Sport Jiu Jitsu