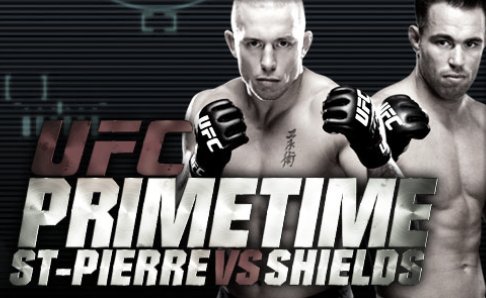 Entering UFC 129, Georges St. Pierre has 17 fights in the UFC, 2 previous appearances on the Primetime special, and a stint coaching the Ultimate Fighter opposite Josh Koscheck last year. He's been featured in commercials for ESPN, Gatorade, and Under Armour. I think fans have an idea of who GSP is and what he is about.

That's why this edition of UFC Primetime is being used to build up former EliteXC and Strikeforce champion Jake Shields as a credible contender for the belt.

Unfortunately, viewership is down from previous seasons. MMA Junkie reports:

For some context, the debut for Quinton Jackson and Rashad Evans drew 1.2 million viewers, while GSP's last time on the show with Dan Hardy drew an even million.

Like the Ultimate Fighter, though, there's a big variable at play here: timeslot. Spike TV slotted the show for midnight ET. GSP vs. Penn and GSP vs. Hardy aired at 10 p.m. ET, while the network pushed back Jackson vs. Evans and Lesnar vs. Velasquez to the 11 p.m. ET slot.