Share All sharing options for: Nick Diaz Threatening to Leave MMA for Boxing 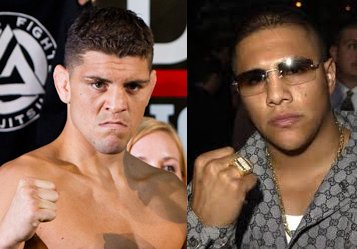 Strikeforce welterweight champ Nick Diaz and his coach/manager Cesar Gracie will be guests on HDNet's Inside MMA this week. It's expected that Diaz will communicate his deep frustration with the current state of his MMA career.  Diaz beat Paul Daley in the first round of Strikeforce: Diaz vs Daley last Saturday.

HDNet quotes Diaz in their press release for the show:

"[Strikeforce] doesn't have anybody else for me to fight right now, I'm better than all these guys they have," says Diaz. "The guys they have ranked above me, I'm sure they don't want to fight me. I don't see much of a future in this sport for me. I honestly don't, especially if there's not a whole [lot] of money going on."

Separately, Diaz's manager Cesar Gracie tells "Inside MMA" that Diaz has signed a boxing contract to fight Fernando Vargas later this year. The contract is awaiting Vargas's signature, but Gracie says that unless Dana White offers Diaz a fight with Anderson Silva, Nick's next fight will definitely be in boxing.

Here's the sneak preview from the show with Cesar Gracie:

It's been reported that Diaz' current Strikeforce contract allows him to take boxing matches outside the promotion. Our own Brent Brookhouse thoroughly debunked the notion that Diaz will make more money boxing than fighting MMA.

We must question whether leaving MMA fights on the table altogether and replacing his MMA career with a run in boxing is even contractually feasible. The option to take boxing fights is categorically separate from leaving the sport in one fell swoop. The latter sounds eerily similar to Randy Couture "retiring" from his Zuffa contract.

We must also wonder if this is a bargaining ploy for UFC employment where Diaz would face a steady diet of top-ranked opposition and could likely garner higher payouts than his current Strikeforce contract can provide.

Whatever one thinks of Diaz's suggestion or the idea that he should move to the UFC, the notion that he'd quit MMA altogether and replace the activity with boxing would be a massive blow to Strikeforce's roster integrity. With more and more pressure being placed on Zuffa to poach Strikeforce talent for crossover fights, holding on to key figures is essential to give the Strikeforce name value and viability. With Diaz threatening to  leave Strikeforce and the sport altogether, the organization's viability is under greater stress than ever.

This is an unusual career move if the information is true. Only Fernando Vargas benefits from this news as he is the only one that will receive a career boost from the fight. In a post-fight interview, Dana White talkedabout how Diaz could be a star and that the money will come. It should especially with the new marriage with Zuffa. Still, Diaz seems only happy when he's miserable.

Shouldn't Diaz question his management about the direction of his finances? If he is claiming that he's not seeing the money then maybe he should ask his manager instead of demonizing a straw person (or people) holding him back. It should be the role of the manager or agent to come up with opportunities both inside and out of the ring. Sure, an agent can only go so far to lobby for matches. But, they definitely can help a client with outside opportunities.  Sponsorships, business investments and general finances are well within the realm of a manager. This is what White meant when he stated Diaz "won't play the game". If Diaz would be more media savvy, he might be able to get more opportunities. Diaz has the "Stone Cold" persona which could play well with sponsors and advertisers. A lot of people are fans of this Nick Diaz.  He just needs to know when to turn it on and off.

A fight with Vargas diminishes the Diaz brand at a time when its received the most publicity.

UPDATE: MMA Weekly spoke with Cesar Gracie and got an update about Diaz' possible boxing opponent:

"Actually, just heard Vargas might have medical issues. So we are looking at another opponent."

The plan is still for Diaz's next fight to be a professional boxing bout, but their sights have shifted to the possibility of him fighting former IBF super middleweight champion Jeff Lacy.