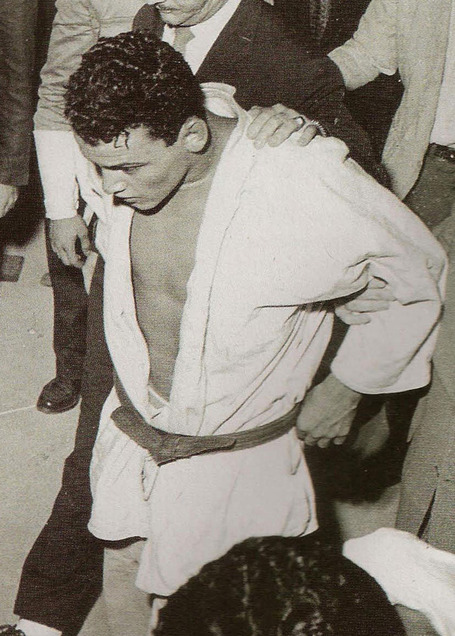 Carlson Gracie made his name as a fighter in the era of Vale Tudo, and is considered the best Vale Tudo fighter of the 50s and 60s. His hyper aggressive style of jiu jitsu had a deep influence on the art and his students, including the great Rolls Gracie.

While Rolls went on to add to the art by studying wrestling, sambo and other martial arts and change jiu jitsu completely, Carlson focused more on how to use jiu jitsu in Vale Tudo. Carlson’s school flew in the face of Helio Gracie’s tradition of reversing advance techniques for members and teaching only basic self defense to all others. Carlson taught his students everything he knew in the name of advancing the art.

Unlike Helio’s side of the family, which jealously guarded the myth of Gracie invincibility, Carlson and his students had an "any fight, any where" attitude and took their lumps as a result. Present failures breed future success and soon Carlson had a juggernaut of a school.

In 1993 when Rorion Gracie started the UFC and kicked off the explosion of Mixed Martial Arts in the western world, his school was already set up to be a powerhouse.  One of their early success was Murilo Bustamante, who won a UFC Middleweight title in 2002 and was apart of the 2005 Pride Welterweight Grand Prix.

Around the same time sport jiu jitsu came into being and a Carlson Gracie student claimed one of the very first world titles when Ricardo Liborio won the 1996 Super Heavyweight division.

But there is no better from these early Team Carlson days than Vitor Belfort, at the time a hyper-talented teenager, who paired lighting fast hands with Carlson’s grappling teachings. Beflort’s win over Wanderlei Silva started a rivalry that would consume Brazilian MMA.

Really it was a continuation of another rivalry, with the decline of the no gi style of Luta Livre in Brazil, Muay Thai had risen as the replacement martial art of the lower class and the flag bearer for that art was the gym Chute Boxe. While they trained in Brazilian Jiu Jitsu, Chute Boxe fighters were viewed by the Carlson Gracie team as just as much the enemy as Luta Livre fighters ever were.

In 2000, things fell apart at Team Carlson Gracie, as things are prone to do in Brazilian MMA. Murilo Bustamante, Ricardo Liborio, Mario Sperry and Luis Roberto Duarte left the gym to form their own school, focused completely on training fighters for MMA.

Brazilian Top Team was born, and it would go on to have a glorious rivalry with Chute Boxe and turn out some of the best jiu jitsu fighters in early MMA. Ricardo Arona, Vitor Belfor and both the Nogueira brothers called BTT home and to some degree for each of them can trace their grappling prowess back to Carlson Gracie’s teachings.

In 2003, there was another schism and Liborio left Brazil for Coconut Creek, Florida and established American Top Team. Liborio is considered one of the best trainers in modern MMA and is still a very dangerous black belt, and if you don’t believe me feel free to ask him for a roll after one of his MMA seminars.

In 2007, the Nogueria brothers would leave BTT and form their own gym and beginning teaching other fighters the finer points of jiu jitsu. Their students include champions like Anderson Silva, Lyoto Machida, Paulo Fihlo and Rafeal Cavalcante who can trace their jiu jitsu lineage back to Carlson fighting in Vale Tudo.

Another of Carlson’s black belts, Ricardo De La Riva was the first man to defeat Royler Gracie in competition and architect of the one of the first fully formed open guard games, the De La Riva guard.

Yet another Carlson Gracie black belt, Andre Pederneiras would go on to found his own Brazilian Jiu Jitsu school called Nova Uniao. Pederneiras’ new school would become a powerhouse in competitive jiu jitsu and then move into training for MMA.

One of Pederneiras’ most famous students was the first American to win a BJJ World Championship at the black belt level, B.J. Penn. Nova Uniao is also home of Wagney Fabianno, Vitor "Shaolin" Riberio, Thales Leites, Marlon Sandro and of course, Jose Aldo. All these fighters add to the already rich legacy of Carlson Gracie, but the great master wasn’t done teaching.

In the late 1990s, Carlson had started spending much of his time in the United States in Chicago setting up an academy there. Carlson spent so much time there that it was a catalysis in the departure of Brazilian Top Team, but it was not time wasted. Demand for jiu jitsu in America was high and young martial artists flocked to train under a legend like Carlson.

A young student of boxing and Taw Kwon Do walked the doors of this Chicago academy in the summer of 1999, wanting to learn how to fight like the small Brazilian he had seen in the UFC. In 2005, Carlson cornered his student, Stephan Bonnar, as he took on Forrest Griffin in possibly the most important fight in UFC history. (Also apparently Bonnar learned the defense against the touch-less-KO, skip to 3:14)

Around the same time Bonnar began training, a small Indiana born Latino started training with Carlson also. Too small to fight in the UFC, Miguel Angel Torres toiled for years in local promotions, amassing an amazing 33-1 record. Finally in 2008 he was brought in to the WEC, where he became Bantamweight Champion and established himself as on of the most important fighters in the formation of that weight class.

Carlson Gracie died on February 1, 2006, still in Chicago training young fighters. The MMA and jiu jitsu communities mourned his loss and it is likely there was no single person had a greater impact on both worlds. From Rolls Gracie, to Team Blackhouse, to the Ultimate Fighter House his presence touched so many people and fighters.

1. Birth on the Battlefield
2. The Meiji Era and the Evolution of Judo
3. Judo Travels the World and Maeda Meets Gracie
4. Baptism By Fire and Luta Livre
5. The Tragedy of Rolls Gracie
6. Coming to America and the Birth of the Ultimate Fighting Championship
7. The Gracies Leave the UFC and Bring Jiu Jitsu Back to Japan