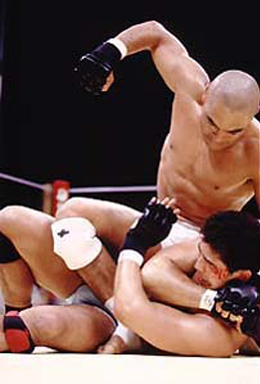 On November 12, 1993 in front of an audience of 2,800, Royce Gracie slipped his arm around Gerard Gordau’s neck and applied a textbook rear naked choke to win the first Ultimate Fighting Championship. Rorion Gracie’s vision of showing to world the effectiveness of jiu jitsu had been realized and did a shocking 86,000 PPV buys.

Royce would return to the Octagon nine more times in the next two years compiling an 8-0-1 record and both Royce and his family’s art became legend with those who watched.

The UFC was a smashing success, almost too successful as it inspired many young athletes to take up the newly emerging sport of Mixed Martial Arts rather than Rorion’s intention of purely spreading jiu jitsu. That said, all across the United States demand for the Gracie’s family art poured out and now there was a challenge to meet that demand.

Both Gracie and student set out the establish schools all over the U.S.A.; Carlson Gracie moved to Chicago, IL and opened an academy, Renzo Gracie set up shop in New York, Jorge Gurgel came to West Chester, OH in a high school exchange program and a Reslon Gracie white belt named Jeff Hudson established a school in Columbus, OH to just name a very, very few.

Rorion Gracie continued to help run the UFC but by UFC 5 he was in constant fights with the television producers about making the events more TV-friendly and lawmakers on making events safer. These problems came to a head at UFC 4 in December of 1994.

Senator John McCain was making serious push to kill MMA in its infancy and made a concerted effort to get PPV providers to drop the show. The UFC staved off his assault this time but that was just the beginning of their problems that day.

Royce Gracie faced Dan Severn, a highly decorated wrestler, in the final of that tournament and the match lasted 15 minutes and 49 seconds, three minutes and 49 seconds over the allotted time for the PPV. Many viewers didn’t to see Royce’s amazing triangle victory, rather their screen went black at exactly 11pm EST. The TV producers used this catastrophe to force the UFC to adopt rounds and time limits.

Rorion believed that this addition of time limits took what was a pure expression of martial arts fighting and turned it into a game. He saw the spirit and purpose of Gracie Jiu Jitsu was in fighting and self-defense and not in a sporting capacity. The Gracies took part in UFC 5 and then withdrew from the promotion all together, selling their stake in the company.

While the UFC had done wonders for jiu jitsu and student numbers at every academy where growing by leaps and bounds, the Gracies were not done fighting.

The two true forerunners of Mixed Martial Arts as its known today were Vale Tudo matches that took place in Brazil over the course of the 20th century and the rise of shoot fighting in Japan.

Karl Istaz, also known as Karl Gotch, was a very accomplished amateur wrestler, competing in the 1948 Olympics in both the freestyle and Greco-Roman events. But it was when he became a professional wrestler that he achieved true fame. During his time in professional wrestling Istaz trained in catch wrestling and even the Indian style of wrestling, Pehwani.

Istaz traveled to Japan and there he taught his wrestling skills to a number of Japanese pro wrestlers, including Antonio Inoki, Tatsumi Fujinami, Yoshiaki Fujiwara, Satoru Sayama, Masami Soranaka and Akira Maeda. Many of these pro wrestlers had backgrounds in either karate or judo.

Together these wrestlers, along with others, began to move Japanese Pro Wrestling away from pre-scripted fights, "works", and towards real matches called "shoots". Rules varied from match to match, and the grappling tended to be submission focused. The promotion Pancrase was creating to feature nothing but these live matches between pro wrestlers and became one of the very first havens of Mixed Martial Arts.

This was a perfect venue for the type of fighting the Gracies preferred to showcase their jiu jitsu, minimal rules so it was as close as possible to actual fighting. It was also not lost on the Gracies that fighting in Japan would mean returning to the home of Mitsuyo Maeda, the man who had taught Carlos Gracie the ways of Kodokan Judo.

The first Gracie to make the long trip to the home of Jujitsu was Rickson, who had been forced to watch Royce fight in the UFC because he had been judged too physically imposing to be considered an underdog. Rickson fought in several Vale Tudo Japan events during 1994 and 1995, but in 1997 he got a chance to become as big a legend as his half-brother in the young sport of MMA.

Rickson was becoming a star of the now rapidly growing Japanese MMA scene, and in 1997 the Gracies were approached by the entertainment company Kakutougi Revolution Spirits to create a new promotion in Japan that would pit Rickson against popular pro wrestler Nobuhiko Takada.

The Gracies agreed, seeing an excellent chance to again show the effectiveness of Brazilian Jiu Jitsu and to that end they would again help to create one of the most successful MMA promotions in history.

On October 11, 1997 four years after Royce fought in UFC 1, Rickson Gracie defeated Takada in the Tokyo Dome at Pride 1.

Pride was an instant success in Japan, taking the action and sport of MMA and giving the flair of Japanese pro wrestling and giving the Gracies the proper amount of latitude with rules for them to be happy to participate. Rickson would fight two more times in Japan and cement himself as a legend in that nation. Renzo, Rolyer and Ryan Gracie would all fight in Japan but it was Royce’s match against a rival of the Gracie family using an old technique that would prove to be the bane of the Gracie family.

Kazushi Sakuraba was a Japanese pro wrestler who faced his first Graice on November 21 of 1999, when he was matched against the very decorated Royler at Pride 8. Sakuraba shocked many in the MMA world when he submitted Rolyer in the second round with a kimura, a shoulder locked named after a Judoka who had defeated Helio Gracie in a legendary match in 1955.

The Gracies wished to avenge their loss and sent Royce, the hero of the UFC, to defeat this upstart pro wrestler. Sakuraba again shocked the world when he forced Royce’s corner to stop the match after an hour and half of fighting.

Renzo Gracie was Sakuraba’s next victim, whom he caught again the dreaded kimura lock and when Renzo refused to tap like his famous ancestor, Sakuraba left his arm mangled. Sakuraba was soon dubbed "The Gracie Hunter" and it would take until Ralek Gracie’s win over him in 2010 for the Gracies to reclaim their honor.

In a brief aside, while the original Jujitsu had been transformed into Judo, which at this point had become an Olympic Sport, but some of Japanese Jujitsu survived the tremendous cultural change Japan went through during the Meiji era and then World War II.

Some of the Ryus, or styles, of the original jujitsu persisted, some preserved almost perfectly while others were molded into new martial arts, like Aikido. Most of these styles focused purely on standing self-defense grappling. Many of the techniques are complicated joint locks that when done correctly are fluid and beautiful to behold and many can still be effectively applied in the real world.

Some of these arts now come under criticism, particularly Aikido, because of their lack of resistance training or sparing. While some of these criticisms are fair and justified these are still fully formed martial arts that had benefited students all over the world.

By the early 2000s, just as the sport of Mixed Martial Arts was entering the mainstream awareness, the Gracies were mostly done with fighting. They had left a deep impact on the sport and mixed martial arts world, but the goal had always been to spread the awareness of Brazilian Jiu Jitsu.

That goal was undoubtedly reached as schools all over the world swelled with eager students to learn from these champions of fighting and test their skills against one another.

1. Birth on the Battlefield
2. The Meiji Era and the Evolution of Judo
3. Judo Travels the World and Maeda Meets Gracie
4. Baptism By Fire and Luta Livre
5. The Tragedy of Rolls Gracie
6. Coming to America and the Birth of the Ultimate Fighting Championship