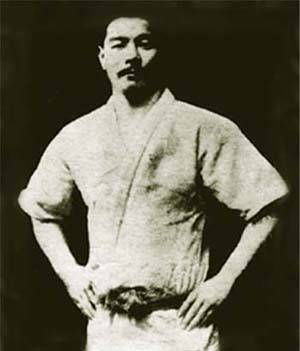 In the late 1800s the great Kano Jigoro streamlined the overly complicated Japanese grappling art Jujitsu into the highly effective Kodokan Judo. Japan was now open to the world, freely trading goods and ideas with the other nations of the world.

Kano wanted to export Judo to the other nations of the world and sent his students around the globe demonstrating Judo and taking challenge matches against other martial artists. Mitsuyo Maeda began training in Kodokan Judo in 1895 at Kano’s academy, quickly becoming one of the academies star pupils and a believer that the best way to promotion Judo was through combat with other martial arts. So in 1904 when Kano was looking for students to send to the U.S. to demonstrate Judo, Maeda was a natural choice.

There is some confusion about Maeda’s background. It is not uncommon for some to claim that Maeda was a student of traditional Japanese Jiu Jitsu, not Kodokan Judo, and that he was carrying the last vestiges of traditional Samurai combat. This misconception is very strong, to the point of being mentioned on the Human Weapon series on the History Channel. This is mainly due to the term ‘jiu jitsu’ was not yet separate from judo in the early 1900s, because many in Japan and even some Kano’s own students still saw Judo as just another style of ‘jiu jitsu’. Maeda himself was known to refer to his style of fighting as Kano Jiu-Jitsu.

Maeda and his fellow Judokas traveled the U.S. making demonstrations, the most dramatic taking place at West Point. An All-American center and champion wrestler, Cadet Tipton, challenged Kano’s students to a grappling match; Maeda was the first to face him. Maeda caught the man in an armbar, but the men of West Point argued that the match should have ended because Maeda had been pinned before he locked on the armbar. Tipton then challenged one of the older Judokas, who he was able to throw and pin easily. Maeda was outraged by the ease at which his fellow was defeated and set out on his own.

He traveled to Europe, where he took on the ring name of ‘Count Koma’ and won matches in England, Belgium and Spain. Maeda then headed back west and visited Cuba, instilling in that small island an interest that would grow to into an obsession with Judo. During his travels, Maeda was heavily influenced by a Western submission grappling system known as catch wrestling.

In 1914, Maeda traveled to Brazil for the first time and for the next seven years he would constantly be visiting the South American nation fighting challenge matches. In 1921 Maeda opened his own Judo academy in Brazil and helped the Japanese government and Brazilian government work out an arrangement for a large group of Japanese immigrants to move to Brazil. 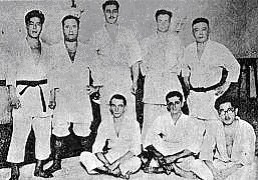 (Maeda with his students in Brazil)

There is some debate on how the meeting happened; some say it was during the establishing of a colony of Japanese immigrants, others say it was at one of Maeda’s judo demonstrations, but however it happened the Japanese martial artist met Gastao Gracie.

Gastao, the son of a Scottish immigrant, was concerned about his son Carlos Gracie, who lacked discipline and Gastao felt that training under Maeda in Judo would be an excellent outlet for Carlos. At age 14, Carlos took his first lessons in Kano Jiu Jistu. For the next eight years Carlos spent training under Maeda and the other Kodokan Judo students. When he was 22-years-old decided that he wanted to make his life out of jiu jitsu, which he would claim for the rest of his life gave him direction and purpose. In 1925 Carlos, now a black belt, opened the first Gracie owned Jiu Jitsu academy in Rio.

Carlos’ first students were his younger brothers Oswaldo, Gastao, George and Helio Gracie. Helio was 11 years younger than Carlos and was sickly as a child, given to fainting spells and was relegated to watching Carlos giving lessons most of the time.

Now we enter a point of contention inside the jiu jitsu world because depending on what branch of the family a jiu jitsu academy traces their lineage they tend to credit the adaptation of Judo into Brazilian Jiu Jitu entirely to Carlos Gracie or Helio Gracie. It can be a hotly debated subject, but the truth likely lies somewhere in the middle.

Carlos would give Helio lessons, but Helio’s frail body had trouble executing some of the movements. Helio had to rely more on the leverage and timing of move than the speed or strength he could execute the move with. Together the five brothers, through trial and error, developed the foundation of what they would call Gracie Jiu Jitsu, but would become known to the world as Brazilian Jiu Jitsu. 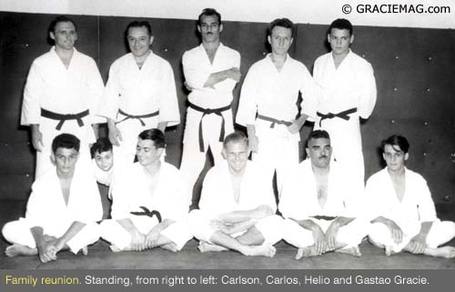 The additions the brothers made to the Kodokan Judo was primarily in the ne-waza, or ground fighting stage. Helio had found that his greatest success against his larger, stronger brothers came when he was on the ground and able to use agility to gain superior leverage. While Gracie Jiu Jitsu still preaches gaining top position as the best method to win a fight, they train extensively in fighting from the bottom position to be prepared from all possible situations.

The Gracies favored a little used position in Judo at the time, called the dō-osae or trunk position, which under their study would blossom into the centerpiece of bottom position fighting: the guard. Many Judokas used the position to some degree, but Brazilian Jiu Jitsu would use it to become a force to be reckoned with in the grappling world.

1. Birth on the Battlefield
2. The Meiji Era and the Evolution of Judo