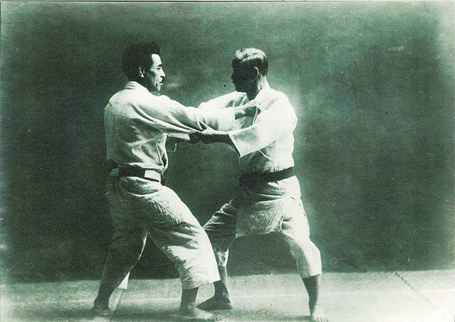 July 8th, 1853 is a watershed moment in Japanese history, when Commodore Perry of the U.S. Navy took a small group of steam-powered warships into Edo (Tokyo) Bay. These iron sided war machines belched smoke into sky and bristled with large naval guns, much bigger than any cannons the Japanese had ever seen mounted on a ship before.

Japan had imposed a closed-door policy concerning foreigners, locking out any influences that Daimyos thought would subvert their power. The Japanese considered themselves a military power, and protected by divine powers, but Perry's intrusion and display of western technology shattered that image. Japan’s self imposed exile had left them in the Middle Ages while the Western powers were in the midst of the Industrial Revolution.

Change had to come and it came in the form of the Emperor Mutsuhito in 1868. The Emperor had long been a figurehead with no actual power while the Shogun ruled the nation as a military leader. Mutsuhito took the title of Meiji, meaning enlightened peace, and abolished the office of Shogun, created a constitution that gave him absolute power and moved the capital from Kyoto to Tokyo.

The Emperor Meiji was determined that Japan should aggressively modernize to become powerful enough to compete with Western powers, rather than become colonized like many other Asian nations. To meet this goal he began to introduce huge numbers of reforms to the Japanese way of life, which would later become known as the Meiji Restorations.

Many of these changes focused on Japan’s military and in 1872 the Emperor Meiji created an Imperial Army of Japan made up of conscripts trained in the use of firearms. Two million Samurai were suddenly out of a job. Tensions came to a head when Meiji outlawed Samurai swords from being worn in public and the Satsuma clan of Samurai rose up in protest.

The Imperial Army of Japan crushed this rebellion with their modern firearms and with the Satsuma Samurai died the old ways in Japan. The ways of the Samurai fell out of favor in Japan, Jujitsu included.

A young Jujitsu student named Kano Jigoro grew up during this tumultuous period. Kano was a talented Jujitsu student, but saw the vast numbers of techniques and lack of core philosophy as a weakness that was holding the martial art back. When it was time for him to teach the art he decided he would focus around a key concept: "to make the most efficient use of mental and physical energy." (Jigoro, Kano Jujitsu Becomes Judo)

Kano took traditional Jujitsu and removed any techniques that used weapons, strikes, eye gouges, fishhooks, and superior brute force. He focused on using leverage and momentum to disrupt an opponent’s balance and then throw him to the ground

In 1882 Kano opened his own school teaching his variation of Jujitsu, which he called Kodokan Judo. Students flocked to train in this new, highly effective martial art and with its streamlined techniques it was easier for students to learn.

Kano divided techniques into two categories: tachi-waza, the standing phase, and ne-waza, the ground fighting. The goal being to use the tachi-waza skills to throw an attacker and the ne-waza skills to submit with a choke or joint lock or to pin the attacker long enough to draw a knife.

In 1886 the newly formed Tokyo police department was seeking a hand-to-hand style with which to instruct their officers, and they decided to pit to traditional Jujitsu against the upstart art of Judo in 15 matches. Kano’s Judo school won 12 of the matches, becoming the official self-defense art of Japanese police officers, which persists to this day.

To help Judo survive the ever-increasing number of laws and regulations against the old ways of the Samurai, Kano also developed a sport aspect of his martial art in conjunction with the self-defense aspect. Kano gave a demonstration of Judo at the 1932 Olympics and Judo was accepted as an Olympic sport in 1964. Sport Judo has grown greatly in the last century, while many of rule changes to make it more audience friendly arguably departed from Kano’s original vision of the martial art the core principles of momentum and leverage are still there.

Kano’s Kodokan Judo represents a Japanese branch of Jujistu. Influences of Judo and Jujistu can be seen in many martial arts including Aikido, Hapkido and Sambo. Another important branch would be formed when on of Kano’s students, Mitsuyo Maeda, traveled to Brazil.

Nagaki, Kosuke. "Randori and the unification of Jujitsu disciplines by the Kodokan."

1. Birth on the Battlefield