Share All sharing options for: Can Brock Lesnar Beat Kimbo Slice in the UFC Ratings Game? 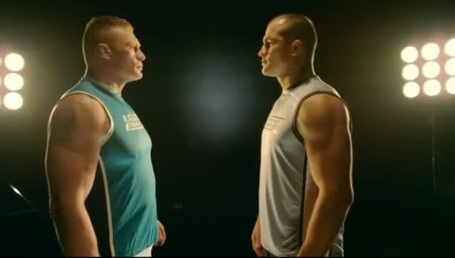 Season 13 of The Ultimate Fighter debuts at 9 p.m. ET tonight on Spike TV with coaches Brock Lesnar and Junior dos Santos and two teams of welterweights. The season is designed as a build for Lesnar vs dos Santos at UFC 131 in a fight that will determine the next challenger for Cain Velasquez' heavyweight title.

But the real fight will be in the ratings. The Ultimate Fighter series has been a strong performer for Spike TV since its launch in 2005 but its never been a huge hit. In fact ratings had been on a long-term slide after season 3 until one Kevin Ferguson aka "Kimbo Slice" agreed to appear on the tenth season.

Slice's run broke all ratings records for the show. His bout with Roy Nelson peaked with over 7 million viewers in the third episode.

The two post-Slice seasons have seen ratings return to normal but reversed some of the long-term erosion that threatened to make the show no longer a viable property.

When the UFC signed Lesnar, their biggest star, to TUF it was a clear signal that they were pulling out all the stops for the show. Not a bad idea given that their contract with Spike TV is up after this year.

Luke Thomas talked about Lesnar's chances to compare with Kimbo's as the star of TUF:

There are several reasons Slice's season pulled in strong viewership. There was a mystique factor about Slice heading into the show. Despite his exposure in ESPN the magazine or on CBS, many people were curious to learn more about him. Additionally, Slice was a competitor on the show. The mere fact that he was fighting brought intrigue. That he was doing so against ostensibly legitimate opposition in pursuit of UFC employment, a legitimizing act that many curious fans were hoping to witness. Even after he lost, the show's producers milked his return to fighting episode after episode leaving viewers with the obligation to hang on if they were to witness Slice in action.
...
Lesnar is in a far different position. He's much more of a known commodity. There are some who will watch to learn more about him, particularly as his personality is on display and professional image develops. But how high can he realistically push the ratings bar?

My best guess is that tonight's numbers will be strong. Lesnar's mere presence on the show will elevate baseline ratings. The fact that he's done significant amounts of promotion and that the season has been heavily advertised in print, television and radio (I heard an ad on 106.7 The Fan this morning for the show, something I've never heard before) should also help boost results.

From there, though, the picture becomes far less clear. Lesnar and dos Santos don't seem to have much of a rivalry. This is not Ken Shamrock vs. Tito Ortiz. There don't appear to be a ton of tense moments to play off of. Moreover, this entire season is a building platform for dos Santos and the Lesnar vs. dos Santos fight at UFC 131. In a very real sense, this season is very much "business as usual": it's equal parts elevating ratings generally as it is UFC 131 fight promotion.
...
All of this is to say, don't expect a repeat of season 10's ratings. Lesnar's inclusion in the show will help boost numbers from seasons 11 or 12, but seem unlikely to reproduce the magic of the Kimbo Slice TUF era.

Regardless of whether he matches Kimbo Slice's season 10 performance, having Lesnar coach the show is a brilliant way to rehabilitate him at a nice profit after his embarrassing loss to Cain Velasquez at UFC 121. Being paired opposite Lesnar also gives the unheralded dos Santos some much needed exposure and should dramatically improve his cachet with casual fans.

That's good thinking because unless Lesnar has learned to handle being punched in the face dramatically better than he did against Velasquez or Shane Carwin at UFC 116, dos Santos -- the best boxer in the division -- seems primed to put the big kibosh on Lesnar as a contender and possibly as a draw as well.