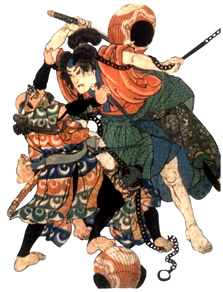 Our story begins in the ninth century, on a small collection of island nations that would become known as Japan. Land owning lords of time known as Daimyos were faced with a time of civil strife and to ensure their safety, they began hiring mercenary warriors.

Most of the warriors during this period were horsed archers—the bow was the pinnacle of military technology and archery was considered the most important skill for a warrior to have. These hired warriors were given privileged status by their local Daimyo in exchange for their service and over time, this lead to the establishment of these warriors as a noble class.

These fighting nobles became known as Samurai and by 1100 AD they were the ruling class of Japan. On the battlefield, they had transitioned from horse archers to masters of a number of weapons including not just the bow, but also the long sword (Katana), spear, a host a shorter blades and a deadly unarmed hand-to-hand style known as Jujitsu.

In the very early days of the Samurai fighting without weapons was considered a form of combat for peasants, but as warfare became more and more a part of Japanese politics the realities of combat began to change this view. By the 1100s, Samurai were a full warrior culture; their children were sent to fighting academies at a very young age to begin a life of training and warfare and Jujitsu was a critical part that training.

Over the next few centuries, these academies sprang up all over the dozens and dozens of nations that covered Japan. These nations had relative peace under the rule of military dictators known as Shogun and each nation had its own army of highly trained Samurai. But as the power of the Shogun slowly weakened, tensions between rival nations grew.

In the mid 1400s the powder keg that was Japan finally exploded into all-out war and for the next 200 years Japan would be embroiled in almost constant warfare. The Samurai were on the front lines for all 200 years of these wars and during this time Jujitsu left a trail by fire.

Jujitsu developed as an unarmed martial art in a culture where basically everyone was armed, so the first goal was deal with an attacker’s weapon. Students would train to defend against swords, spears or knives. While strikes targeting the eyes, nose, groin and other vital points were incorporated, striking was not the focus of Jujitsu because Samurai armor would negate their effectiveness.

Samurai learned to how take down armored enemies, when opportunity presented, with an array of trips and throws to secure a dominating position, and then use anything at their disposal from eye gouges to an enemy’s own knife to dispatch the prostrate Samurai. Fighting from the back would have been a desperate scramble, looking nothing like the calm and methodical bottom game of modern competitive jiu jitsu. A Samurai, weighed down by armor, would frantically fend off his enemies attempts to stab through the gaps in his armor while trying to reach the relative safety of his feet.

As the period of intense war drew to a close, the 1700s became a golden age for the Samurai. This period is the height of the great combat schools, each the home of a master of a battlefield art, Jujitsu included. In the absence of war, students of rival schools would sharpen and display their skills in death duels.

It was during this golden age that Jujitsu was able to grow, as Samuari trained at these martial academies and it was at this point that many of the basic joint locks, pins and chokes were in common practice. Every school practiced different techniques and the art was splintered into countless styles by these schools.

Despite translating as 'art of softness' Jujitsu was a desperate art of survival that used anything at its disposal. Many techniques used blades, chains, biting, eye gouging or just pure brute strength to gain an advantage. That said, the most universal techniques operated on the principles of using momentum and leverage to defeat enemies rather than strength.

The resulting combination of throws, joint locks, chokes, strikes, pins and weapon techniques was a deadly and overly complicated art that was segmented into dozens of styles across the islands of Japan.

But in 1853, the world of the Samurai was rocked when Commodore Matthew Perry of the U.S. Navy brought his steam-power warships armed with modern cannons into Tokyo Bay. The result was the awakening of the Japanese people from their self-imposed exile. This would mark the beginning of the end for the Samurai and Jujitsu...

Nagaki, Kosuke. "Randori and the unification of Jujitsu disciplines by the Kodokan." The original Judo Information Site.