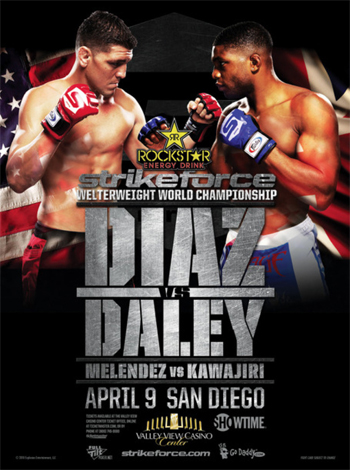 Strikeforce: Diaz vs. Daley has the potential to completely collapse.

The first huge factor is obviously the tragic earthquake and tsunami in Japan that has claimed so many lives and has wreaked havoc in Sendai especially. Yoshihiro Akiyama has already pulled out of his fight at UFC 128 as a result. His fight has a much closer date of course, but there is no telling what Tatsuya Kawajiri, Shiya Aoki and Hiroyuki Takaya will do. One thing to keep in mind is that Tokyo proper was relatively unaffected by the tsunami. This event is still a month away so they may be more likely to hang in there than Akiyama was however. They may even feel the need to represent their country more than ever because of what has happened, who knows.

The second thing; related to the first, which may be a non-issue because it's only a rumor I've read in a few places, is that Real Entertainment was apparently slated to assist Strikeforce/Showtime in the production of this event, presumably with the live presentation side of things to make it look a bit cooler. It's safe to say that matters will probably be more complicated regarding that, what with bringing over all those people from Japan and all.

The third thing is Paul Daley and his relationship with Zuffa, the new parent company of Strikeforce. He has gone on record saying that he no longer wants to fight Diaz at this event because he'd now be making money for Dana White, the guy who banned him from the UFC for life. Of course, he is contractually obligated to fight already, but he is talking with his management and probably some lawyers to see if there's any kind of loophole that would allow him to pull out. Even if he can't pull out, we can probably expect some weird behavior from him at the event and during the press week for it.

So, in a worst case scenario, we could be looking at 3 out of the 4 fights on the main card not happening as is, and one important one in the prelims.

I wonder if they would be able to borrow some Zuffa fighters in such an event...

MMA Junkie is now reporting that KJ Noons and Jorge Masvidal are being considered as possible replacements for Shinya Aoki and Tatsuya Kawajiri respectively, should they decide to pull out. At the time of posting, none of the Japanese fighters slated to fight on April 9th have announced their plans.

MMA Junkie reports that for now, Melendez vs. Kawajiri is still on. Still no word on Aoki or Takaya.