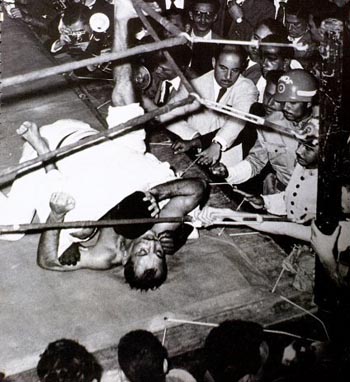 In the 1920s, Carlos Gracie was the head of a small but growing academy where he and his brothers taught the Gracie family adaptation of Kodokan Judo. Carlos was looking for ways to draw attention to 'Gracie Jiu Jitsu' and followed the example of his teacher, Mitsuyo Maeda, by holding public matches against other martial arts.

In the early 20th century Vale Tudo fights were becoming popular in Brazil and served as the ideal venue for showcasing Jiu Jitsu. These matches pitted two fighters against each other in matches that had minimal rules and are the forerunners of western mixed martial arts. That said these matches did not much resemble modern MMA, rules could range from simple mixed grappling matches to no rules brawls.

Carlos issued an open challenge for anyone who wanted to take on a Gracie Jiu Jitsu fighter. Later dubbed the Gracie Challenge, Carlos’ challenge would set events in motion that would launch the Gracie family into the spot light, bring Brazilian Jiu Jitsu to the world and lead to the creation of the Ultimate Fighting Championship.

Carlos and his brothers accepted many, many challenges over the next forty years. Boxers, professional wrestlers and generic tough men were common opponents. They also received many challenges from fighters trained in Capoeira, a striking martial art originating from Africans brought to Brazil as slaves by the Portuguese.  A dynamic art of kicking and punching, but they had to disguise it as a dance to hid it from their masters. The Gracies won the vast majority of these matches.

It was in these Vale Tudo matches that allowed the Gracies to fully test their art and techniques in live fight situations. It is in these no rules matches, and sometimes full on street fights, that the Gracies proved their art’s self defense potential.

While Oswaldo, Gastao, George and Carlos all took part in challenge matches, it was Helio Gracie who sought out the biggest fights on the biggest stage he could find. While Helio had become much healthier through his training, he was still a very small man with very little physical strength and he sought to demonstrate the superiority of his skills by challenging much larger opponents.

But it was Helio’s 1951 match with Mashaiko Kimura that earned him everlasting fame. Kimura was a living legend and is considered one of the best Judokas of all time. Helio was at a significant weight disadvantage, how much is hotly debated, and Kimura boasted that if Helio last three minutes with him the Japanese champion would declare the Brazilian the winner. In the 13th minute of the match, Kimura secured a reverse ude garami shoulder lock and when Helio refused to tap, Kimura broke his arm. Carlos Gracie stepped in and forfeited the match on behalf of Helio, but Kimura left extremely impressed with Helio.

Kimura awarded Helio the rank of 6th dan black belt, the highest black belt rank in Judo and invited Gracie to come teach at his Academy in Japan. Helio politely refused the invitation, but the Gracies renamed the reverse ude garami lock "the Kimura" in honor of the Judoka’s victory.

The match was filmed but sadly only about two minutes of the film survived:

In 1940, Euclydes "Tatu" Hatem submitted George Gracie using his own from of grappling called Luta Livre. Hatem paired judo submission locks with catch wrestling to create a reaction to jiu jitsu strikingly similar to the 1970s rise of Shoot in Japan. Both arts scoffed at the use of gi, focusing only on no gi grappling and made extensive use of leg locks which both Judo and Jiu Jitsu mostly ignored. Luta Livre became 'catch all' phrase for many in Brazil and could describe any number of no gi grappling styles.

There were socio-economic and racial elements to this rivalry also, the Gracies were a very well-to-do family before their entry into grappling and their fees for lessons were enough that Jiu Jitsu was a martial art of the middle and upper class in Brazil, who were predominately light skinned. Luta Livre became the martial art of the lower class in Brazil, many who were descended from African slaves. This tension is one that persists today and is behind Anderson Silva’s "where is your Jiu Jitsu now playboy?" taunt to Demian Maia.

This battle between the styles would consume the Brazilian martial arts world for decades to come and it would be the children of Carlos and Helio that would fight these battles.

The general in the field for Brazilian Jiu Jitsu was Carlos’ oldest son Carlson Gracie. Helio had opened his own Academy teaching Gracie Jiu Jitsu by the 1950s, but he only taught the basic positions and basic self-defense.  The advance techniques were reserved for only members of the Gracie family. This practice was only reinforced when one of Helio’s own students, Valdemar Santana, challenged him to match and defeated his teacher after 3 hours of grappling.

Carlson made his name as a 23-year-old by avenging the loss of the aging Helio by beating Santana three times and drawing twice. Carlson had great success in Vale Tudo matches and became the most sought after Jiu Jitsu instructor in Brazil.

The massive success that of the Gracies and their students in Vale Tudo meant that as the fighting sport became more popular and Luta Livre fighters became more common that any Jiu Jitsu fighter had a huge target on their back. To help assure that Jiu Jitsu’s dominance would continue, Carlson founded his own school and taught all techniques to his students, flying in the face of Helio's tradition. Carlson taught his highly aggressive style of Jiu Jitsu to many students, some who would go on to found the legendary gym Brazilian Top Team.

Entering into the late 1970s and 1980s new names emerged in the continuing war against Luta Livre; younger Gracies raised in the martial art and weaned on the legend of their elders. Rolls, Relson, Rickson, Royler and Renzo Gracie would all prove their mettle in the trenches against Luta Livre fighters.

While Luta Livre would ultimately faded as its practitioners would fail to win major mixed martial arts or grappling titles, but it had a lasting affect on Brazilian Jiu Jitsu. It forced Jiu Jitsu fighters to start learning leg locks and to take no gi grappling seriously.

1. Birth on the Battlefield
2. The Meiji Era and the Evolution of Judo
3. Judo Travels the World and Maeda Meets Gracie