This Saturday, we spoke with Sergey Karitonov, who is already back in Thailand, training with Golden Glory Team. Despite the fact that it was already after 10:00 PM when we called him, Sergey was in a very good mood, taking his time to answer all of our questions and thanking his fans in Russia and all over the world. 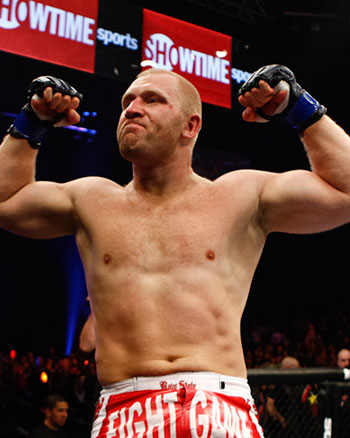 Just a few key points from almost an hour-long interview, can be found below.

Training and preparation for the fight:

-    I am in very good shape, already returned to training with my team Golden Glory, getting ready for the semi-final. Alistair will be coming to train with us in the next several weeks, he is not here yet,

Thoughts about next opponent in Strikeforce:

-    I think Josh Barnett is more dangerous as an opponent. We were suppose to have a fight back in PRIDE days, but for various reasons, it never materialized. Either he was injured, or I was injured or our managers didn’t reach the agreement. Rogers is younger, more hunger and wants to prove a lot. I will be ready for either one of them

-    I am planning to have 2-3 fights before my semi-final bout. I can’t get any ring-rust. You can train as hard as you want, but if you don’t compete, that won’t do you any good. Its lawys better to train and fight periodically. I had 4 fights in last few months, and very happy with this fact. I am always in shape, I am ready physically and morally. I wish the same for Fedor Emelianenko. I think that he lacks of competition. He needs to fight more in order to become great again.

Answering our question about reasons for the Fedor’s lost:

-    I can’t judge. I think the fact that Fedor hasn’t had a fight in a long time was the main reason. I had losses myself, when it seemed like I was ready physically but not mentally, because I had long breaks between the fights. It’s not easy mentally to prepare for the fight after a long delay. I wish Fedor will fight more often. I heard will compete in Sambo tournament. He is our champion, but it’s up to him if he will listen to me or not. For example, I competed recently in K-1. I also want to do some Sambo as well, maybe even Jiu-Jitsu. The more we fight, the stronger we are mentally.

-    I know Fedor so well. We trained so much together. He is a hard-worker. We woke-up together, trained together, ran together, we trained twice a day, side-by-side; we trained 2.5 hours straight, without a single break. He is very talented individual. He is a very good painter; he has many other positive attributes. Also, he has so much pressure; the entire Russia is looking up to him, that also plays a role.

Talking about his game plan for the Arlovski fight

-    I and my trainer were planning to finish the fight somewhere around second round. I knew that he will be very aggressive in the opening minutes and will spent a lot of energy. Possibly, I took a few too many shots. Our tactic was to exhaust him and then take him down in the second round, but we also said, if I hit him good, go for the finish, don’t give him any chances. I did land good shot in the first round and decided not to delay the finish.

In regards to common opinion about Arlovski’s "Glass Chin"

-    Take a very simple example, his fight with Antonio Silva, he is a dangerous opponent, with a good, knockout strikes, but he couldn’t knockout Andrei. Everybody can lose with a knockout. Andrei ahs a normal chin and strong head. This is a heavyweight; every blow can be a good night. He doesn’t have a glass chin; he just fights very openly, very extremely. People like his style, but there is no doubt in my mind, his chin is not made out of glass. I think he will continue training; he is in good age to continue.


Answering the question about best heavyweights in the world, Strikeforce vs. UFC:

-    It’s hard to say, both organizations have good fighters. Cain Velasquez is a very good fighter. But the, the 8-man Gran-Prix has the very best heavyweights in the world. Thank you to Scott Coker. We have fighters from all the disciplines, BJJ, Sambo, Boxing. Very good tournament. I think that today, this is the best tournament in all MMA. We have stars, such as Alistair Overeem, who currently holds three belts, Fedor, Silva, Werdum. All the guys are very good fighters.

Whose ideas was it to record those short video-clips, such as "I will break you!" Will you do something like this for the next fight?

-    Pretty sure there will be. It’s ok, its professional sport. We have our won emotions, it’s the way to express them, let them out and get ready for the fight mentally. We are professionals, nothing personal, but its also marketing. I am sure I will continue doing this in the future.

In regards to Fedor’s striking coach Michkov saying that everyone but Fedor will fail the Olympic style steroid testing:
-    (Little irritated in his voice). Everybody has its own excuses. These words are based on nothing, you can come up with whatever. I don’t want to comment this in any way. If anybody has problems with illegal substances, they are easily found…but if there are no positive results found, then other people start making stuff up.
-    We get tested before every fight. Its very very strict. I am all for the testing, I believe that every sportsman needs to take these tests.

Final words from Sergei to the fans:
-    In the final words I want to say big THANKS to all my fans. I feel your support all the way. I am getting better every day. I have new trainers, I am working with very good specialists. I want to win this Gran-Prix very much, and if you will support me morally, I will do it! 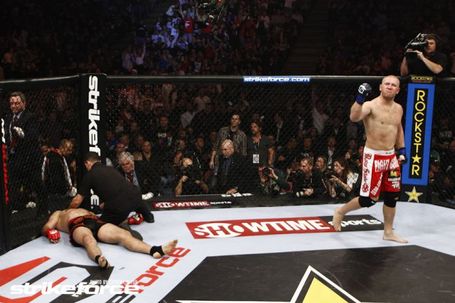 Source and more from Sergey's Interview in Russian: Valetudo.ru