Strikeforce headlines the weekend with their fourteenth installment of the Challengers' series, taking place at the Cedar Park Center in Austin, Texas on Friday, February 18th. The card will be headlined by an intriguing match-up pitting undefeated lightweight Lyle Beerbohm against scrappy veteran wrestler Pat Healy. A win for Beerbohm will more than likely vault him into the race for the title while Healy has the chance, once again, to play spoiler to a promotion's plans. The card will air live on Showtime at 11:00 PM EST.

Also on the billing for the evening, Tachi Palace Fights 8 will be streaming live at MMAJunkie.com at 8:30 PM EST. It will feature a main event middleweight title bout between Leopoldo Serao and UFC veteran David Loiseau along with a flyweight championship showdown between Ulysses Gomez and Darrell Montague. Most fans will want to tune in to watch consensus #1 ranked flyweight Jussier da Silva battle former WEC fighter Ian McCall. Both events will be live-blogged here at BloodyElbow.com tonight.

Lightweight: Lyle Beerbohm (15-0) vs. Pat Healy (25-17): A lot of fans are overlooking the fact that this is a solid headliner for a Challengers' card. Not only is Beerbohm's undefeated streak on the line, but it will give us a glimpse at how he might handle the upper-echelon talent awaiting him at the top of the division. Healy provides the perfect challenge. Solid wrestling skills, underrated submission ability, and a decent striking base. He also single-handedly derailed MFC veteran Ryan Ford's career with some heroic performances, and he has the chance to do the same here on Friday night.

On paper, both fighters stack up well against one another. Both possess similar skill-sets with solid wrestling and average striking ability. Beerbohm is a bit more destructive in his striking from top control, and his submission game is much more well-rounded. I think that may ultimately give Beerbohm the edge in this fight, but Healy is as live of an underdog as they come. I'll go with Beerbohm, but this should be a razor thin decision if it goes to the judges.

Catchweight (160 lbs.): Carlo Prater (25-10-1) vs. Bryan Travers (14-2): Prater's poor takedown defense in combination with his inability to produce offense off his back should be a means for Travers to claim victory in this catchweight showdown. While Travers has been beaten by better wrestlers in the past, it's difficult to see Prater imposing his will on Travers with that type of gameplan. There is the slight possibility that Prater out strikes Travers on the feet, but I think Travers will avoid those exchanges for the proven strategy of relentlessly working over Prater from top control.

If Travers can find success implementing that strategy, this should be a relatively easy victory via decision over the course of three rounds. I wouldn't count out Prater completely, however, as he does have the ability to work over lesser grapplers on the ground, and Travers isn't sporting medals from the ADCC championships. But I'll rely on the NCAA Division I wrestling pedigree of Travers to overwhelm Prater here.

Lightweight: Ryan Couture (1-0) vs. Lee Higgins (2-0): At a cursory glance, this has all the makings of being a showcase bout for Couture. Both Higgins and Couture are neophyte fighters hoping to continue their unbeaten records, but Couture's name, training camp, and better amateur record give him an edge on paper from the perspective of most fans.

Higgins' propensity to grapple should be perfect for Couture, who is the better grappler from some of the footage I've seen. Higgins is much stronger on the ground, but Couture's major crutch is his less than speedy stand-up and lacking defense to power strikes. Higgins won't test Couture's chin with devastating power, and he'll likely lean on the strategy of gaining top control and pounding away. Unfortunately, Couture knows how to submit opponents rather quickly from his back. I'll take Ryan via submission.

Welterweight: Erik Apple (10-2) vs. Ryan Larson (5-2): From what I've seen of Larson, Apple should have all the tools at his disposal to run him over in this welterweight battle. Apple is much more technically sound in his stand-up game, has proven power in his hands, and possesses the grappling acumen to escape and evade Larson's attempts to try to make this a chess match on the ground. Apple's stand-up should be his key to victory in this fight, and I have no doubts that his Muay Thai striking game should pick apart Larson, eventually putting him away in spectacular fashion. I'll take Apple via TKO.

Catchweight (150 lbs.): Nick Gonzalez (16-8) vs. David Douglas (5-2): Neither fighter has been overly impressive over the course of their careers, but both men have faced stiff competition and faltered when those challenges presented themselves. The difference is that Douglas is only seven fights into his career while Gonzalez is well over 20 professional fights.

Most fans look at Douglas' training camp as a surefire sign that he'll win this fight, but he's very sloppy in the stand-up department and nothing to write home about on the ground. Gonzalez isn't a world beater either, but he, at the very least, has some technique to his striking. Unfortunately, he isn't very effective, and his takedown defense is rather weak. I'll go with Douglas via a steady diet of takedowns, but this fight may go either way. Close call, but I'll take Douglas via decision. 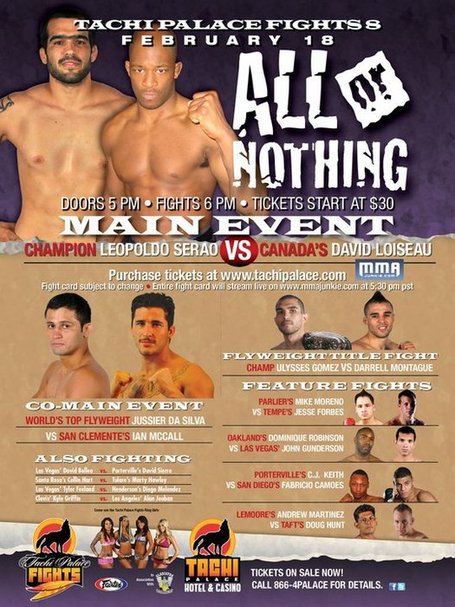 Middleweight Title Bout: Leopoldo Serao (17-7) vs. David Loiseau (19-10): Serao relies heavily on his grappling background to win him fights. Loiseau, as you might recall, isn't the most savvy defensive grappler, and he relies more on his dynamic striking ability to finish off opponents over grappling prowess. The style mismatch should make this somewhat competitive as Serao normally resorts to pulling guard to prolong fights and avoid damage, but I think "The Crow" will prove to be the better striker and land a stunner at some point in this fight. Loiseau via TKO.

Flyweight Title Bout: Ulysses Gomez (7-1) vs. Darrell Montague (8-1): Very interesting flyweight title match-up here as dangerous grappler Ulysses Gomez battles knockout artist Darrel Montague. Gomez is the paper favorite here as he has a well-credentialed background in Brazilian jiu-jitsu along with a supporting cast that includes trainer Marc Laimon. Montague, not to be outdone, has a large training camp that includes veterans such as Georgi Karakhanyan, Manny Tapia, and Charlie Valencia. Obviously, both camps have the resources at their disposal to improve their fighters along with giving them the tools to succeed.

Gomez' grappling is an enormous strength in his arsenal, but Montague's knockout ability is a scary countermeasure. While both men have faired well against similar competition, Gomez' lacking striking game doesn't inspire me to pick him in the early rounds. If he can tire out Montague and extend this fight to the latter rounds, he should win. I'm not under that assumption though as I think Montague can bomb him through three rounds and eventually scrape by with a decision win.

Flyweight: Jussier da Silva (8-0) vs. Ian McCall (8-2): "Formiga" is the easy pick here as his grappling prowess is unmatched in the weight class. His striking game isn't as explosive or damaging as one would hope from a fighter hailing out of Nova Uniao, but it's evident that he's working to improve that aspect of his game. McCall is a fighter who can be dangerous on the ground, but he'll more than likely want to implement a sprawl and brawl type of gameplan to keep Jussier standing for most of this fight. Unfortunately, noone has been able to stop Silva's timely takedowns and smothering grappling ability. I'll go with "Formiga" here via a grappling clinic on the ground, but I don't think he'll be able to finish off McCall.

Middleweight: Edgar Garcia (8-2) vs. Mike Moreno (4-2): Garcia's knockout power should be the key to victory in this middleweight showdown on Friday night. Moreno isn't overly experienced, and Edgar should be able to run him over with his aggressive style and powerful striking. If Moreno can survive the onslaught early, it could get rather interesting in the later rounds as Garcia isn't exactly a marathon runner, but I'll bank on Garcia finding Moreno's chin at some point in this match-up.

Lightweight: John Gunderson (30-11-2) vs. Dominique Robinson (5-4): Gunderson's wrestling and top control game should be enough to smother Robinson over the course of three rounds, and I wouldn't put it past "Quick Guns" to pull off a kimura either. I look forward to seeing Gunderson attempt to work his way down at 145 pounds, a weight class that I think he could be very effective in. Gunderson via decision.

Lightweight: Fabricio Camoes (10-5-1) vs. Steve Lopez (12-3): Camoes has been a major disappointment when we consider the hype that surrounded him when he made his debut with the UFC. The UFC didn't offer him any easy wins however, and that's the way this sport works sometimes. Lopez was also a two-and-done fighter for the UFC, although his losses came against lower-level competition in comparison.

Lopez has proven knockout power and above average wrestling ability, but Camoes can combat that style with a Brazilian jiu-jitsu black belt. Look for Camoes to take this to the ground and wrap up Lopez quickly. Whether or not Lopez can survive the entanglement on the ground is up in the air, but I think Camoes eventually finds a way to finish off Lopez via submission.