Brock came into the sport and had one easy fight. After that, he fought a list of men that no man with his experience level had ever had to face. Mir, Herring, Couture, Mir, Carwin, Velasquez and then Overeem. That folks, is a murderers row that no man who is just dipping his toe into the combat sports waters should ever be lined up against. He went 5-3 against these men. Something I feel comfortable saying that no other man would be able to do or be asked to do. All while battling a severe intestinal disease and having a foot of his colon removed

To me, Brock Lesnar is an enigma. He is an athlete like we rarely get to see in action. The man's ability to sell a fight is unrivaled by anyone past or present in MMA history. Either you love him or you love to hate him. There is no middle ground. The bottom line is, you always showed up to watch him fight. If you dislike the man, that is fine with me, but there is no denying the impact he has had on the sport we love.

Frank Mir had his career brought back from the dead thanks to his two fights with Brock Lesnar. The prospects of a superfight with Lesnar (along with several other circumstances) brought Randy Couture back into the Zuffa fold. Cain Velasquez and now Alistair Overeem have got the rub from Brock by defeating him. Their performances against Brock made them stars and vaulted them into prominence.

I will always remember the Brock Lesnar who unleashed the "who's the fucking man" ground and pound onto Frank Mir, teaching him a lesson for eating Brock's precious strawberries. The Brock Lesnar who sent Heath Herring somersaulting backwards across the octagon and straight into a Ferrari-less retirement. I am thankful for the man who taught me to drink Coors Light because Bud Light isn't paying me anything and that it is totally okay to announce to a worldwide pay per view audience that I plan on having missionary style intercourse with my significant other. He has a sword tattoo, he God blesses God and he put his drooly, bloody mouthpiece in Joe Rogan's shirt pocket. He made us all pay attention.

Brock Lesnar is first and foremost, an entertainer. This served both to his benefit and to his detriment in his mixed martial arts career. In the end, he brought thousands of new eyes to the sport of MMA. He delivered the highest pay per view buys of any fighter in the history of the sport. This put more money in his pocket, the UFC's and all of the other men who fight in the company. Everyone benefited from Brock Lesnar being in the sport and that is undeniable.

I just want to say thank you. A thank you I know that he will never read because it is on the internet. So thank you for bringing me into the world of mixed martial arts. Thank you for always putting on exciting fights. Thanks for everything, BROCKLESNAR!!!!! 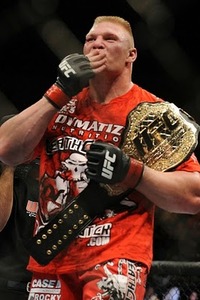