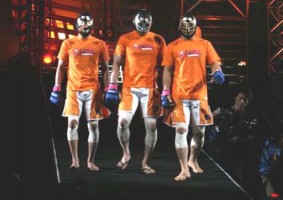 I have been taken back by the amount of vitriol expressed in the comments of Matt Roth’s recent stories examining Brock Lesnar’s career in professional wrestling. While a lack of interest with anything relating to a "staged sport" from a segment of MMA fanbase doesn’t surprise me what does is the outright hostillity expressed by many readers. For them positing any link, no matter how tenuous, beween the UFC and the WWF is to defame the sport they love. What many of them are apparently unaware of is that mixed martial arts is really professional wrestling. No, not the professional wrestlng of Vince MacMahon, Hulk Hogan, Ric Flair, Jesse "The Body", and Bobby "the Brain" Heenan, but professional wrestling non-the-less, albiet under a different name.

As I’ve tried to chronicle over the last year, the sport that would eventually be named mixed martial arts is not a recent invention, having been born of two parents over a century ago. From out of Japan in the East came a number of practioners of (the often interchangeable) jujutsu and Kodokan Judo who travelled extensively throughout the Western World in their quest to spread their art. To assist in this they quickly began demonstrating the "gentle-ways" effectiveness by challenging and facing in a variety of matches the home-grown Western fighting disciplines of boxing and wrestling. The West’s contribution was provided by professional wrestling, which was already staging mixed bouts between the different schools of grappling by the time jujtusu appeared on the European or American landscape. In no time the two disciplines would be facing of against each other in the ring.

During the early 1900s, numerous contests between jujutsu and wrestling were held, often under the old prizefighting rules of "no holds barred", "anything goes", or "all-in": rules of wrestling that usually stipulated that no hold or tactic (with a few exception such as biting and gouging although sometimes even that was allowed) be banned from use, including striking. Eventually these evolved into an informal set of codified rules where both wrestling and jujutsu techniques where merged into a new style of wrestling, which was sometimes known as "jiu jitsu wrestling" when a jacket was worn (Will Bingham and Prof. Takahashi were strong proponents of this style). This was better known as "all-in" or "Slam Bang Western Style" wrestling and would become the basis for post Great War wrestling. Unfortunately, it was during the war years that wrestling metamorhosized from a somewhat legitimate sport into a completely staged one. Thus legitimate professional wrestling and the newly born mixed martial arts were eliminated in most of the world in one fell swoop.

Fortunately it didn’t die out completely. In South America during the war years traveling Western wrestlers and Japanese judokas (most notably Matsuyo Maeda) hoping to escape the conflagation in Europe brought this "anything goes" wrestling with them as part of their travelling shows to the more hospitable lands of Brazil. These matches found some popularity in Rio de Janiero, São Paolo and the state of Bahia, becoming known as vale tudo (which translates as "anything goes" in Portuguese), eventually being televised on "Heróis do Ringue" from 1959-60.This widespread popularity wouldn’t last, being deemed too brutal for the masses, but would continued to be practiced as a fringe "sport" in Rio and the northern and southern regions of Brazil. Amongst the more well-known combatants to participate in these matches where Geo Omori, Manuel Rufini, Dudu, Wladimar Zbszko, Masahiko Kimura, Walkermar Santana, Euclides Pereira, Rei Zulu, Ivan Gomez, and, most famously, the Gracie family. It was a Gracie, Rorion, who would bring this (at least real and not staged) "anything goes" wrestling back to the United States on November 12, 1993, with the first Ultimate Fighting Championship.

You can read the rest of this article at Head Kick Legend or by clicking HERE.