While most sports fans are somewhat familiar with the striking game from watching boxing, either in movies or the actual sport of boxing, it is hardly the only aspect. Even with the additions of kicks, knees and elbows, the striking game is something everyone can understand -- hit the other fighter without getting hit. The clinch is an area of combat that many newer fans don't fully comprehend.

While most sports fans are somewhat familiar with the striking game from watching boxing, either in movies or the actual sport of boxing, it is hardly the only aspect. Even with the additions of kicks, knees and elbows, the striking game is something everyone can understand -- hit the other fighter without getting hit. The clinch is an area of combat that many newer fans don't fully comprehend.

In a boxing match, when the two fighters get tied up, the ref steps in and breaks them apart so the action can start again. Many criticize this aspect of MMA as simply "men hugging" but, in martial arts like Muay Thai or wrestling, the match is just getting started when the fighters clinch.

The clinch can generally be defined as the position where fighters are standing but have grabbed ahold of each other. There are two offensive strategies in clinch fighting: looking to strike or take the opponent down. Which strategy a fighter is using in the clinch game has the same basic goal -- be the one in control.

When striking from the clinch, a fighter wants to be in control of his opponent and create space to send a powerful strike towards the head or body of the controlled fighter. And once that space is created fighters have everything from uppercuts, to knees, to elbows at their disposal.

Some fighters prefer what is often referred to as the "dirty boxing" clinch.

Chris Leben used the "dirty boxing" clinch to perfection against Wanderlei Silva. The contest is a match up of fierce [to avoid "wild" x 2] brawlers and they start out trading wild hooks, but once the distance is close enough, Leben grabs the back of Wanderlei's head, immobilizing it.

Leben forces Wanderlei's head down and then throws uppercuts, connecting perfectly with Wanderlei's chin. That moment of immobilizing the Brazilian's head was all the heavy handed southpaw needed to end the fight.

Clinch striking is a central aspect of the kickboxing art of Muay Thai, where knees and elbows are allowed. As a result, Muay Thai matches are a chess game in the clinch as fighters position themselves to best deliver punishment. The ideal position for delivering knees to the head is referred to as 'the Muay Thai clinch'. There are few better in MMA at using this clinch than UFC Middleweight Champion Anderson Silva.

Here is Silva, at the time a challenger for the UFC belt, using Muay Thai knees against then-middleweight champ Rich Franklin. Silva has both hands behind Franklin's head, controlling his posture, and keeping his elbows in Franklin's chest to create the space for him to drive his knees upward. Silva gets his hips far back from Franklin and then steps in to each knee strike, generating maximum power. Strikes likes these are some of the most damaging in MMA.

While fighters will throw strikes from any position in the clinch, there are many fighters who look for takedowns. There are several different kinds of takedowns but there are three major arts that focus on taking opponents down: Freestyle Wrestling, Greco-Roman Wrestling and Judo.

Freestyle Wrestling, one of the Olympic styles of wrestling that is a catch-all, allows participants to use any and all non-submission grappling techniques to take their opponent down and pin them. NCAA wrestling is a form of a Freestyle, and fighters from that background tend to favor 'shot' takedowns, either the double leg or single leg takedown.

Greco-Roman wrestling refers to a wrestling style that comes from the ancient tradition of -- you guessed it -- Greece and Rome. In Greco-Roman wrestling, no grabbing below the waist is allowed so the standing grappling takes place exclusively on the upper-body. Like clinching to strike, wrestlers want control of their opponent but, unlike the striking clinch, they want to get in close to score a takedown. 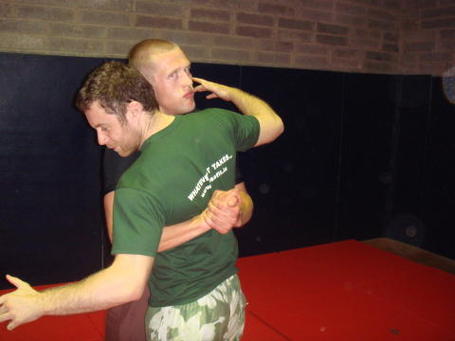 The position pictured above is called double underhooks, which means one fighter has his arms clasped around the other fighter's torso and is able to get his hips in close and get in position for a throw. Fighters will prevent their opponents from getting in this position by what is called pummeling. Normally, fighters will find themselves in over-under grips in which both fighters have one underhook.

Similar to Greco-Roman Wrestling is the Japanese art of Judo, which focuses mainly on manipulating the upper body to throw opponents to the ground, but Judo does allow attacks bellow the waist. So, in addition to Judo's iconic hip throws, it has a wide array of clinch takedowns, trips and foot sweeps. Judo players have more trouble transferring their techniques to MMA because of the lack of the gi, and the grips it provides, however, Judo techniques are becoming more and more common in MMA

The cage plays a big role in clinch grappling. It is a common strategy for the controlling fighter to press the other into the cage to constrict breath and space in order to strike or counter grapple. The clinch is one of the most grueling positions in MMA: the constant push and pull is exhausting and a fighter cannot let up for one second because a moment of relaxation can lead to being thrown through the air or getting an elbow in the face.

Next time we hit the mat and talk about positional and submission grappling.