The sport of Mixed Martial Arts has exploded in the previous twenty years and has attracted countless new fans. And as the sport evolves it is very easy to lose sight of even the recent past of the sport much less its far reaching roots. So this series will bring will recount the history of Mixed Martial Arts, from the earliest forerunners to the modern sport of MMA focusing on pivotal fighters, styles, fights, rivalries and events. To start off we are going to travel back to Ancient times to give the modern sport proper context. We start with the Ancient Greeks and the sport of Pankration, also called Pancratium.

In the 600s BC, the major empires in the Middle East favored larger armies centered around archery, chariots and quick moving light infantry that worked well on large open battlefields. The Greeks however lived in a mountainous country, were battles were fought in ravines, valleys and mountain passes with heavy infantry at close quarters. With military service being obligatory for citizenship in the Greek polis, the average Greek man was well-versed in close combat.

Out of the clash of phalanxes came a combat art based on real combat experiences that combined wrestling and striking. This art, Pankration, was practiced in varying forms from Greek city-state to Greek city-state, and included joint locks, chokes and neck cranks.

To fill the time during years of peace, Greeks had sporting contests, mostly based around preparing Greek men for war. Pankration was a natural addition and appeared in the Olympic games. Rules varied from city to city and there is evidence that Spartans were outlawed from most competitions for their unfortunate tendency to kill their opponent and that they were encouraged by their teachers to bite and scratch in matches.

Matches, in general, were fought naked and combatants coated themselves with sand to create friction for grips. Fighters then could strike or grapple, depending on their own personal style and matches ended when one contestant was unable to continue or signaled defeat by raising an index finger on one hand (an ancient tapout). Death was a fairly common occurrence in these matches. 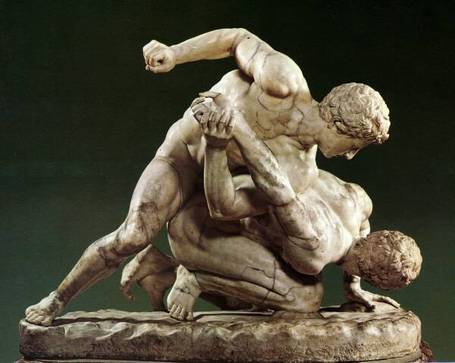 Some historians have theorized that when Alexander the Great unified the Greek people with the Macedonians and they conquered the Persian Empire and entered India they spread Pankration east influencing the development of martial arts there. While this sounds all well and good, there is no evidence to support this assertion.

Alexander's death mark the decline of the Greeks as an international power and the small, warlike city of Rome rose to fill that power vacuum. The Romans did practice both wrestling and boxing, Pankriation was adopted into these existing Roman sports. True Pankration existed in small pockets around the Empire until the Emperor Thedosius forbade it. I want there to be no confusion, there is no clear connection between Ancient Pankration and modern MMA, but it is a clear pioneer art in combat.

In recent years there has been a resurgence of Pankration as Greek martial artists recreate the techniques based on paintings and statues. This resurgence gives us a better understanding and insight into what may have been the first formally practiced martial art.

The Discovery Channel show Human Weapon did a pretty decent feature on this recreation of Pankration.