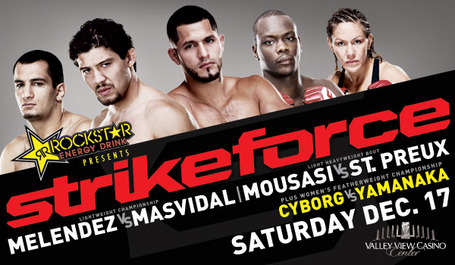 Strikeforce hasn't presented a major card since the Heavyweight Grand Prix Semi-Finals card in September, but they're back on December 17th. San Diego will play host to the event, which could possibly be the last major event the promotion ever puts on. The main event will see Strikeforce lightweight champion Gilbert Melendez defend his title against Jorge Masvidal. Melendez is on a five-fight winning streak and is universally considered one of the top three lightweights in the world. A win in this fight would surely see him move over to the UFC. In the co-main, Cristiane "Cyborg" Santos will defend her women's 145 lb. title against former dominatrix Hiroko Yamakana. Keith Jardine will also be making his middleweight debut. Here's the current card: