Melvin Guillard has always been his own worst enemy.  Whether it was diving into a guillotine after controlling the first 7 minutes of his bout with Nate Diaz, getting dropped by a pedestrian striker like joe stevenson or discarding his wrestling ability and allowing weaker opponents to force grappling matches on him, Melvin Guillard has done his best to undermine his own success. 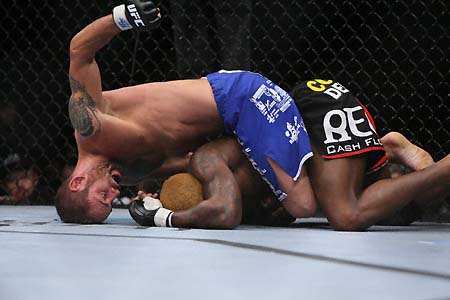 Guillard being dominated by journeyman Rich Clementi, via en.susumug.com

We were led to believe that was the old Melvin Guillard.  The new Melvin Guillard has great takedown defense and usually springs back to his feet immediately when he is taken down.  He was able to wade through extended periods of ground grappling against 2 Brazilian Jiu Jitsu black belts in Ronys Torres and Gleison Tibau without being submitted.  The new Melvin Guillard fights under Greg Jackson and uses sound gameplanning to work towards his own strengths rather than his opponents.  Look to his fight against Jeremy Stephens as an example of Melvin fighting carefully because of the respect he had for Jeremy's prodigious power.  But alas, old habits die hard.

Last night Melvin was facing Joe Lauzon, an aggressive and well rounded fighter who is extremely dangerous in, at the very least, the opening round of every fight.  This concerned Melvin not.  At the post fight presser, Lauzon said that while he was relaxing and mentally preparing himself for a tough fight that evening, Melvin was at the UFC Fan Expo.  Later that evening, instead of walking out to the cage looking focused, Melvin had a huge smile on his face.  After being checked at the entrance, he was jumping around the octagon like he was in a house of pain music video.  Before Bruce Buffer introduced the fighters to the crowd, Melvin walked up to Lauzon and gave him what looked to be a consoling hug and handshake, as fighters often do to an opponent they had just defeated.  In his mind, Melvin had knocked Joe Lauzon unconscious before the fight had even begun. 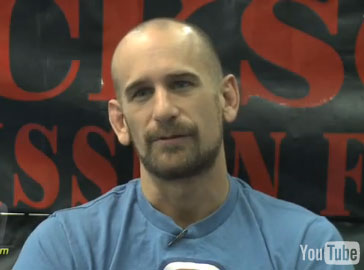 As the fight commenced, Melvin was bouncing around all over the place throwing flying techniques.  Surely this was not the gameplan given by Greg Jackson or any of the guys at Rashad Evans camp.  Taken out of context, Lauzon dropping Guillard with a left hand would seem shocking, but given both his past proclivities and his recklessness in the first 25 seconds of the bout this was not the least bit surprising.  Lauzon quickly jumped to a dominant position, taking Guillard's back and then after a short hand fight forced Melvin to tap to the rear naked choke. 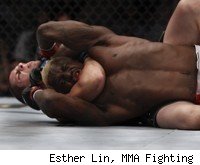 I wouldnt say Guillard was "rocked" by Lauzon's punches.  I think "dropped" and "stunned" are more appropriate adjectives.  This is an important distinction because the manner in which the fight was finished disturbs me.  In recent times rear naked chokes have become less common than they once were.  Fighters who have their back taken are just much better at hand fighting than they once were.  "Protect your neck" has become second nature to any MMA or grappling practitioner.  Hand fighting has improved drastically in recent years.  Nowadays rear naked chokes seem to occur usually when a fighter is either rocked badly ala Charles Oliviera vs Nik Lentz, when a fighter is belly down and taking punishment and the aggressor sneaks his arms in for a choke while the other is defending punches, or when a fighter is trying to transition to a different position and is caught unexpectedly a la Cole Miller vs Ross Pearson or Jon Jones vs Rampage.  Getting outworked in a few seconds in a hand fight and getting choked out by anyone short of BJ Penn is for a lack of a better time, straight up white belt shit.

In the prefight hype videos shown on the pay per view broadcast, Melvin proclaimed "I'm not worried about any of his little jiu jitsu".  What a perfect microcosm of his entire career.  Overconfidence leading towards a humiliating submission loss.  In the words of Chris Rock, Melvin Guillard didnt go crazy, Melvin Guillard went Melvin Guillard.  And it's the best thing that could have possibly happened for him.

Melvin Guillard was convinced the old Melvin Guillard was gone.  He was in the past.  The new killer in his place has deadly power and unstoppable striking and the wrestling necessary to keep the fight standing.  Since relocating to Jackson and rejuvenating his career Melvin was void of any hiccups.  As the wins piled up, cautiousness became confidence and confidence became overconfidence.  Extended success reanimated the dormant Guillard of old.  And failure will rejuvenate the patient, studious, and cautious Guillard of recent times.

The loss last night was definitely a roadblock to a title shot.  Guillard was two or possibly even one win away from challenging for the 155 pound strap.  But had he escaped last night victorious, he mentally would not be ready to fight the champion.  Fighting someone as technically sound and resilient as edgar, you cant have any mental lapses. 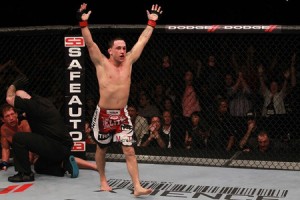 Edgar overcomes a 10-8 1st round to finish his longtime nemesis Gray Maynard in the 4th, via www.yorkblog.com

On paper Guillard is a nightmare matchup for Edgar.  Not only is he bigger, but hes faster, more athletic, stronger, a very skilled striker with proven takedown defense and hits a lot harder.  As Jordan Breen has said multiple times, if Guillard were in the cage with Edgar in either fight where Maynard had Edgar hurt, there would be a new champion.  And it's not just Edgar.  An on point guillard is simply a tough matchup for anybody at 155 because of his skillset.

Luckily for him his potential wasnt completely derailed, just roadblocked.  The lightweight division has had numerous near title contenders in recent years come very close and not quite get there due to a badly timed loss.  Florian losing to maynard, Sotiropolous suffering multiple losses, Evan Dunham being obliterated by Guillard, Pettis being outwrestled by Guida, Jim Miller being manhandled by Ben Henderson,  The difference between those losses and Guillard's is that every other loss was a potential killer.  Either a lack of athleticism or a lack of physicality caused those fighters to be beaten or demolished in such a way that its hard to picture them as future champions.  While Guillard's repeated mental mistakes make it hard to take him seriously as an elite fighter, his ability to overcome them in recent fights lead me to believe he can do it again.

Melvin has a long road ahead of him.  Overcoming such a natural inclination towards mid fight idiocy is a very tough thing to do.  Last night was a good reminder to Melvin that is he human and he has not become invincible.  But it's not completely back to the drawing board for him.  While he showed a lack of defensive ability when his back was taken, the other problems are very easily correctable.

Although Guillard and others (cough chael sonnen cough) have often shown otherwise, defensive jiu jitsu is the easiest discipline to make improvement in through hard work and dedication.  Fighters with awful takedown defense rarely end up stuffing tough wrestlers.  Fighters with a lack of athleticism or physicality are doomed to be overwhelmed facing certain fighters.  Guys who are notoriously bad strikers go through the proper motions of being a striker, but it takes years for them to become effective and comfortable on the feet.  Despite repeated mistakes, Guillard's seem much easier to correct than the other near contenders.

With lots of hard work in the gym working not only his strengths in striking and wrestling but also his weaknesses on the ground, i suspect that this first hiccup after beginning work with Greg Jackson will be his last, for at least some time.  He knows what works and was once again reminded what does not work.  He is likely to have flaky moments sometime down the road, but this fight will only serve to refocus his drive towards fulfilling his potential.  While these occasional slip ups wont ever lead towards extended Anderson Silva-like dominance of the 155 pound division, it can definitely lead to a title shot and perhaps even becoming champion.