It took him 43 minutes and 54 seconds, but Frankie Edgar finally provided a resolution to what he and Gray Maynard started on New Year's Day.

The trilogy fight followed the same script as their UFC 125 rematch. Edgar found his range early, peppering strikes in and out against the slower, more deliberate Maynard. The fight continued this way until Maynard caught an incoming Edgar with an uppercut, sending the champion staggering. Maynard sent Edgar flailing around the Octagon just as he nine months ago, this time with a measured aggression. Edgar, somehow, escaped the round intact.

One would think Maynard would come out stronger than in the second round of the rematch. In that fight, the challenger, whether due to exhaustion or headhunting or some combination of the two, fought passively, allowing the champion not only to recover, but earn back a round on the cards. Maynard's relative patience in the first round figured to leave him more in the gas tank this time around, but the same pattern emerged. Edgar, somehow recovered from his first round suffering, looked fresher and faster, beating Maynard to the punch throughout the second frame.

This is where the script changed. Maynard bounced back in the third round back in January. This time, Edgar continued to fluster Maynard, taking the third round on all three judges' scorecards. That momentum carried into the fourth round. It began to look like Maynard would need to win another 10-8 round in the fifth to win the fight. And the spectre of a draw loomed its head once more.

Edgar erased the need for the fifth round with just over minute left in the fourth. It started with, of course, an uppercut. Maynard staggered back into the fence. Edgar sensed weakness, and charged. Maynard succumbed to the onslaught. He fell to his hands and knees. Edgar kept punching. Maynard's head bounced off the canvas twice before referee Josh Rosenthal stepped in.

Edgar jumped to the top of the fence. He kissed the camera, leaving behind a smudge of sweat and blood.

FIGHTER OF THE NIGHT 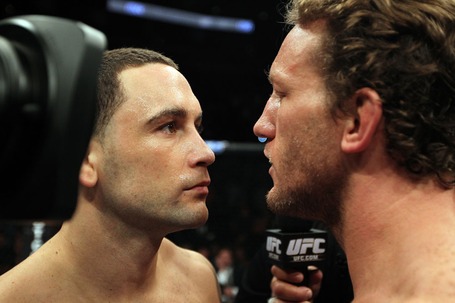 You can take your Leonard Garcia and shove it up your ass. If you don't love Frankie Edgar, you're not a fan of MMA. In 2010, he beats B.J. Penn twice within a year. He follows that up with two of the most impressive performances ever seen in the sport in 2011. This is what manhood looks like.

MOMENT OF THE NIGHT 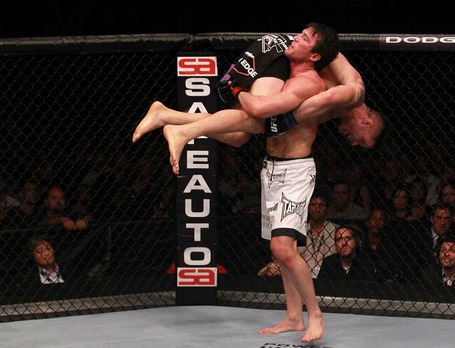 If you didn't love Chael Sonnen's post-fight promo, you probably take yourself way too seriously.

GOLDBERG LINE OF THE NIGHT 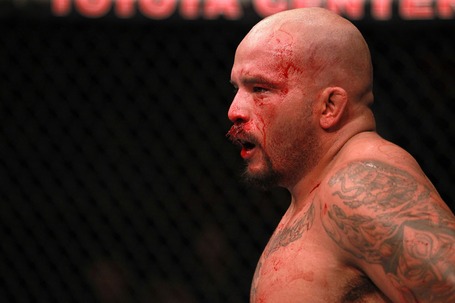 "Sometimes I think the more tired Joey Beltran looks, the more dangerous he is."

ENTRANCE SONG OF THE NIGHT

Despite Dana White's assurance that Zuffa needs more fighters, there's no margin for error in the UFC. It only takes one loss to find a pink slip waiting for you on Monday morning. Who's on the Chopping Block?