The late money was coming in on Nick Diaz, moving him to a favorite at many sportsbooks by the time his UFC 137 main event with B.J. Penn started. That combined with Penn appearing to be in tears gave the fight a strange feeling before it even got underway.

The opening frame went how many fans and media expected it to go as Diaz got countered by Penn's sharper boxing and B.J. even scored a takedown and got a little work done on the ground, setting himself up well for the fight ahead. Unfortunately for Penn, Diaz and his unrelenting cardio were just too much and wilted B.J. in the second round. For the majority of the second frame it was Diaz trapping Penn against the cage and opening up with the trademark Diaz flurries. Penn came back in the third to go out swinging, throwing his hands even in a losing effort.

Penn lost on the scorecards but put on a fun and exciting fight that should have fans remembering him the right way after he announced his retirement following the loss.

For Diaz, he put on the kind of performance that has many insisting that the UFC should abandon the idea of giving Carlos Condit the title shot against Georges St. Pierre. Diaz claimed after the fight that GSP wasn't really hurt, he was just scared. UFC president Dana White was saying that the outcome of this fight would have no impact on Condit's title shot as recently as this weekend but one has to wonder if that will hold up.

As of the time of this article it's sounding like Diaz may be told that he earned a title shot as soon as the post-fight press conference. (Update: At the post fight presser it was confirmed that the UFC will make Diaz vs. St. Pierre for the title. They are aiming for Super Bowl weekend)

Photo of the Night: 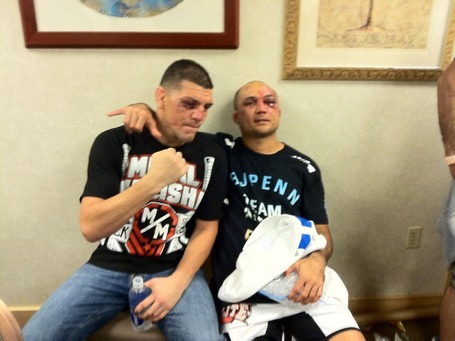 The two main event fighters, both showing the marks of their battle.

Bloody Elbow Fight of the Night 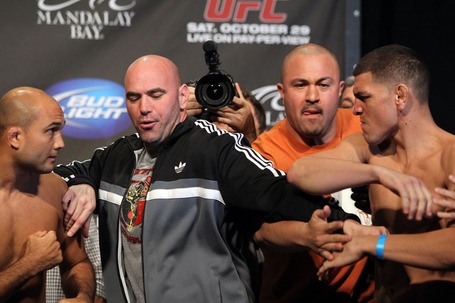 Via Zuffa LLC via Getty Images

I can't change from Diaz vs. Penn. It was the one fight that was truly good start to finish on the card and that we'll still be talking about weeks from now.