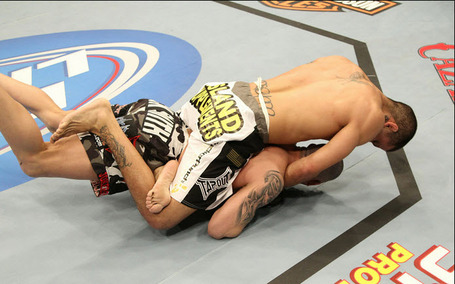 One of only 2 submissions at last night's UFC Fight for the Troops event, the finish to the Damarques Johnson / Michael Guymon fight appeared to be accidental and unintentional leaving Johnson feeling frustrated he couldn't end the bout in a more typical manner.

We've always heard during commentary from Joe Rogan that a body triangle from the back has the potential to finish a fight due to pressure on the spine but we rarely ever see it. In fact as Rogan alluded to the last time we saw it finishing an MMA fight was Ivan Salaverry against Tony Fryklund, which was at UFC 50 in 2004. On re-watching that fight you can hear Frank Mir on commentary call it a Figure 4 Body Lock and also mention that it's been banned from collegiate wrestling exactly because of the pressure it puts on the spine. I believe you can also just make out Tony Fryklund saying he hurt his back earlier which might also explain why he tapped.

Before being banned from collegiate wrestling and it's more prevalent use in MMA or submission grappling (mostly for control) it was a finishing hold favoured by some of the Catch-As-Catch-Can carnival wrestlers several decades ago. These Catch Wrestlers had dubbed it the Hook Scissors and had worked out how to use one to maximum effect coaxing their victim to cry unkle when they couldn't take anymore. In fact one wrestler of the 1930's and 1940's by the name of Paul Jones used it as his trademark and he went by the nickname "The Hook Scissors King". During an interview in 1949 in New Zealand - by which point Jones had retired as a performer and become a promoter of pro wrestling - he claimed there was only one way to escape:- stand up! Easier said then done, Paul.

Damarques Johnson's version had some subtle differences to Ivan Salaverry's which I'll break down after the jump as well as a brief look at his superlative guard passing that spelled the beginning of the end for Guymon.