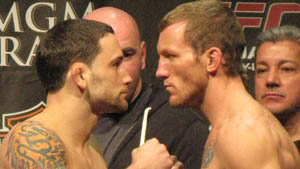 Both lightweight champion Frankie Edgar and Gray Maynard had been criticized for putting on boring fights. Tonight they put on a classic back and forth war. The judges ruled it a split decision draw with one judge scoring it 47-47.

Both fighters the fans and UFC officials were infuriated by the draw decision that will undoubtably bring calls to change the judging system.

Gray Edgar came out hard in the first round of his title challenge against Frankie Edgar. He tagged Edgar hard with punches and chased a stumbling Frankie Edgar around the cage landing many many strikes. Maynard landed more punches standing and dropped Edgar. But Edgar kept surviving and standing up again. Only to eat more Maynard punches. Edgar somehow got back up and landed a counter punch. But it didn't stop Maynard who kept stalking Edgar. Edgar began to land some shots but they had little pepper. Maynard looked for a knee to the face as the round ran down.

Edgar came out in the second shucking and jiving and landed a hard punch with a right hand. Maynard came in but Edgar landed hard counters. Then he landed a huge right hand but it didn't stun Maynard. Maynard shot in but Edgar stuffed it easily. More quick snapping punches from Edgar. Then Maynard roared forward and Edgar caught him and slammed him to the ground. Maynard stood up quickly though and began to stalk Edgar again. Edgar lept forward with hooks then stuffed a Maynard shot. Then Edgar landed a hard right.

Between rounds Maynard's coach former two division UFC champ Randy Couture chastised Maynard for trying to knock out Edgar and told him to beat him up instead.

Edgar landed jabs to open the third. More nice exchanges including body shots. Maynard began to score hard shots. Maynard shot in for a single leg but Edgar stuffed it and landed some uppercuts. Maynard with a jab. Maynard caught a kick but couldn't get Edgar down. Edgar then stuffed another shot. Maynard landed a left hook and worked to cut off the cage. Edgar's footwork was just too much. Hard jab from Maynard Then an uppercut made Edgar bleed. Edgar landed some hard counter punches followed by hard leg kicks. Maynard shot for a single leg and slammed Edgar down. Edgar stood up and Maynard took him down. Edgar threatened a kimura from his back but Maynard escaped. The round ended with Edgar working for a guillotine choke.

Edgar landed an uppercut then went for a take down. He then got a very tight guillotine choke that had Maynard fighting for his life. Then Edgar got another take down and immediately went for the guillotine again. Then Maynard rolled and Edgar went for his back. Maynard escaped back to his feet. Maynard seemed visibly tired. Edgar threw Maynard off and landed a hard punch. Maynard landed a jab, went for a take down, got stuffed and landed a punch. Edgar with a right of his own. Edgar pushed Maynard up to the cage and landed a solid punch to the face. Edgar jumped free and landed a body punch. Edgar shot in but Maynard got stuffed. Edgar landing combos. Maynard with a swing and a miss. More combos from Edgar.

In the final round Maynard came out landing punches the took Edgar down and worked from a front headlock position. Edgar quickly slipped out and stood back up. Edgar connected as they traded. Maynard shot in listlessly but Edgar stuffed it easily. Maynard ate punch after punch as the fight ended. Both men bled as the fight ran out of time. They ended the fight trading wildly.