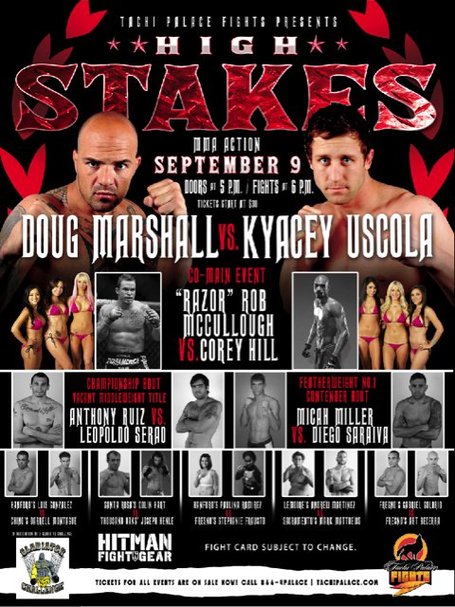 As usual, the card is sprinkled with both prospects and big show veterans, and will stream live on GoFightLive.tv for $9.99, beginning at 9:00 PM ET / 6:00 PM PT. Join us then for live play-by-play and discussion of the entire show.

Full play-by-play after the jump.

Round 1: Uscola comes out lobbing leg kicks, but it's Marshall who scores the first solid shot of the bout with an overhand left. Uscola shoots and plows Marshall into the fence, then down to closed guard. Marshall threatens an armbar briefly as Uscola stacks him against the cage. Nothing doing, and Uscola flips Marshall all the way over and takes his back, sinking in one hook. Marshall, on his knees, grabs Uscola's left arm and pins it beneath his chin. Uscola postures up and begins wailing away from back mount, and Marshall goes out! It's a wrap.

Round 1: Ruiz pushing the pace with strikes through the first half of the round, but doesn't appear to be landing flush with anything but his jab. Serao catches an eye poke but doesn't want any time to recover. With 90 seconds left, Serao finally makes his move and trips Ruiz down against the base of the cage. He takes mount, then Ruiz' back, but can't finish it out. 10-10.

Round 2: Ruiz catches a kick low almost immediately and Serao is instantly apologetic. No harm, no foul, and they quickly resume. Serao waits to find Ruiz coming forward and shoots a high single. He dumps Ruiz on his back against the cage once more and works from side control with just about three minutes left. Thirty seconds later, Serao jumps into mount and flattens Ruiz out. Ruiz gives up his back and Serao immediately sinks in both hooks. Ruiz defending the RNC well, causing Serao to unleash a few B.J. Penn-style heels to the liver. Ruiz sweeps and nearly escapes, but he leaves his leg within Serao's grasp and gets dragged back down. Side control for Serao again with 30 seconds remaining. The round ends with Serao mounted on Ruiz' back. 10-9 Serao.

Round 3: Ruiz defends a takedown and takes some vicious swings at Serao, who wants to slap five again. Ruiz shakes it off and keeps swinging. Serao doggedly working a high-crotch single against the cage, Ruiz defending well as he digs away to the body. Serao switches to a double-leg and drops Ruiz midway through the frame. Serao takes mount and Ruiz tries to roll out, but not this time. Serao takes Ruiz' back but gets too high and Ruiz slips out the backdoor. Serao catches him in a loose triangle, tries to switch to an armbar, but it's not there. Ruiz stacking him up and hammering away, but has to relent when Serao slaps on another triangle. A frustrated Ruiz storms away at the bell. 10-9 Serao.

Round 4: Ruiz comes in swinging and charges into a Serao guillotine. Ruiz doesn't look concerned, but Serao winks knowingly at his corner. Ruiz falls to the ground and Serao tries to finish it from the topside, but they're too sweaty. Serao takes full mount, though. Ruiz sweeps and nearly gets caught in a triangle armbar from Serao. Now Ruiz working from Serao's closed guard, but not working enough for referee Mike Beltran, who stands 'em up before the round expires. 10-9 Serao.

Round 5: Serao bleeding from the nose early in the final stanza as Ruiz desperately pounds from Serao's closed guard. Serao in survival mode on the bottom, Ruiz punching away. They pop back up briefly and Ruiz stuffs a shot, gives Serao some elbows to the head. Ruiz finishes the round and the match wailing on Serao from guard. He takes the round, but it's too little, too late. 10-9 Ruiz.

Round 1: McCullough flicking leg kicks at Hill early, and I'm wincing with each one. Hill trips McCullough down and immediately gets mount! McCullough stuffs him back to half guard and does well to close the distance, then tries to scramble free. On his way up, Hill snares McCullough in a tight, tight choke, but McCullough somehow gets loose. Hill standing about three feet away from McCullough on the feet, but McCullough still landing leg kicks. Hill strings together his best three-piece combination of the round, and McCullough answers with more leg kicks. 10-9 Hill.

Round 2: McCullough still working the left leg of Corey Hill, both inside and outside. Hill pops his man with a nice left jab. More leg kicks from McCullough, right straight down the pipe from Hill. McCullough's got a mouse under his right eye and gets tripped down, but rolls Hill right off and escapes to the feet. Hill gets a waistlock and drags McCullough down once again. Hill looking for the same anaconda choke he had in the first round from north-south position, but again can't finish. 10-9 McCullough.

Round 3: Hill scores a takedown two minutes in, but McCullough's got his back glued to the fence. McCullough scrambles, Hill pulls and closes guard. McCullough trying to ground and pound from the top, not connecting much but does try a Sakuraba-style double axehandle as he tries to break Hill's wrist control. Ninety seconds left and referee Jason McCoy stands them up for no apparent reason. Hill soon drags McCullough down again, but again McCullough escapes. Back to Hill's closed guard, and now McCullough is scoring with punches and elbows from the top. 10-9 McCullough.

Round 1: Saraiva trying to wade inside on his much longer opponent with leg kicks, flurries and the Thai plum, but Miller is landing the better strikes through two minutes. Miller pouring on the combinations as Saraiva's strikes slow down. Nice knee to the jaw from the clinch by Miller which has Saraiva shaking his head. Saraiva drags Miller down with a single-leg, but Miller's soon back up. Two lefts and a right from Miller send Saraiva into reverse. 10-9 Miller.

Round 2: Miller picks up where he left off last round, picking Saraiva's defense apart with combinations. Saraiva briefly attempts a takedown, but Miller defends well. More and more punches from Miller, looking almost Diaz-ian. Saraiva answers with a flush right hand and Miller doesn't blink. Left jab of Miller is visibly frustrating Saraiva. Miller digs a hook to the body. Saraiva pulls guard and Miller follows himi down, but doesn't stay for long. Miller closes out the round still piling up combinations and takes another round on my card. 10-9 Miller.

Round 3: Saraiva comes out swinging wildly. Miller pops him with a few more lefts and Saraiva shoots weakly. Nothing doing. Right hand from Miller wobbles Saraiva but Micah doesn't pounce. Now Miller mixes in some knees to the body. Still more combinations from Miller as a fading Saraiva sends single leg kicks back. Two minutes left. Miller still trying to line up a knockout uppercut, but content to add punches to the tally. It's all Miller down the home stretch and he should take this comfortably with his well-implemented game plan. 10-9 Miller.

Round 1: Montague drops for a heel hook and appears to elicit a tap from Gonzalez, but it's unclear and the fight continues as Montague releases the hold. The rangier Montague using his length well, pumping his left jab on Gonzalez, who fails on a second consecutive takedown attempt midway through the round. Montague floors Gonzalez with a left uppercut and a few follow-up punches on the floor put "Speedy" out cold.