Why B.J. Penn Is Fighting Matt Hughes at UFC 123

Share All sharing options for: Why B.J. Penn Is Fighting Matt Hughes at UFC 123 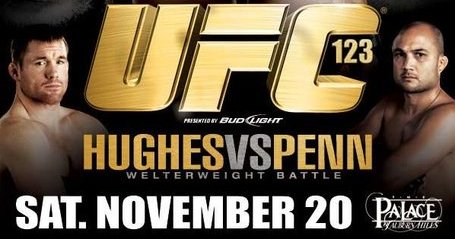 I've been meaning to write about this match up since it was announced. Initially I took it as a clear indicator that the UFC was giving up on B.J. as a factor in the light weight division and consigning him to the "senior circuit". But this MMA Junkie interview with Penn shows it wasn't quite that simple:

"I talked to Dana, and they tried to put me in the ring with Florian, (and) Dana said Florian was hurt," said Penn, who submitted Florian in 2009 to defend the belt. "[Dana] said, 'What do you think about Hughes?' I said, 'Matt Hughes?' I got chicken skin all over my body. I said, 'Tell him I'm coming. Tell him, let's go.'"

After suffering back-to-back defeats, Penn said he had more sense than to request a fight with a UFC Hall of Famer who fights at a heavier weight class - especially one who's climbed back into title contention with a string of wins over Matt Serra, Renzo Gracie and Ricardo Almeida. But with the opportunity to fight again quickly, and with Hughes on board, he simply couldn't pass it up.

"I'm more respectful than that to lose two fights in a row and say, 'OK, give me Matt Hughes,'" Penn said. "They offered me that fight. Matt was really excited about the fight. Dana called me and said, 'We offered Matt the fight. He's going to put everything on hold to take the fight if you want it.' And I said, 'I've got nothing else better to do. Let's do this.'

Hughes vs Penn is a great way to keep both fighters busy, entertain the fans, and make money for the UFC while the lightweight picture clarifies. If Frankie Edgar beats Gray Maynard and appears to be starting a long-term title reign than B.J. will be in the dreaded Rich Franklin zone.

After Franklin lost twice to MW champ Anderson Silva, the UFC pushed him up to the 205lb division, although they also gave him a string of fights with more relevance to the MW division than the LHW: Dan Henderson, Wanderlei Silva, Vitor Belfort. So even though they said they wanted to keep Rich Franklin from being a MW gatekeeper and moved him up to 205lbs, they used him that way anyway.

Unlike company man Franklin, the mercurial Penn is not someone to be relied on to toe the company line. The independently wealthy Penn is only going to take fights that appeal to his interests.

If Gray Maynard beats Edgar, then regardless of the outcome of his welterweight fight with Matt Hughes, they can set up a rematch between Kenny Florian and B.J. to see which fighter will re-emerge as an immediate factor in the LW division.

In the meantime, they've beefed up UFC 123 with a very strong co-headliner that should also be a great fight.