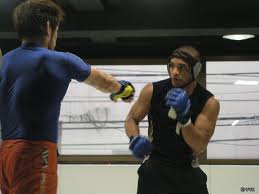 Daniel Herbertson wrote a couple weeks back about Sengoku's approach to talent development:

From their conception Sengoku has been putting "training players" of all levels into a program that is meant to support fighters through the initial stages of a professional MMA career.

Maximo Blanco and Shigeki Osawa were the first recruits and they have been given financial aid, placed in appropriate dojos (Sengoku are also opening their own dojo in the coming months), provided with jobs that will be flexible around their fighting career, been given mentoring and advice at seminars and recently took part in a Sengoku sponsored summer training camp.

Training players gain experience fighting in lower level shows, Sengoku preliminary fights or in televised tournaments called Sengoku Gold Cup which have been held in Japan and Korea (with no audience à la The Ultimate Fighter). No fighter is kicked out of the development program for losing a fight and applications to the program are open to anyone.

Herbertson follows up with a very interesting interview with Maximo Blanco, who's being groomed to fight for the vacant Sengoku Lightweight title. He talks to Blanco about his Sengoku 13 bout with Rodrigo Damm and his upcoming Sengoku 15 fight with Leonardo Santos. But I was fascinated by Blanco's account of his experience in being brought to Japan as a potential MMA star and attending college there:

Domestic titles in high school led to him being scouted for his ticket out of Venezuela - a scholarship at a Japanese university in Fukuoka. His Pan American wrestling bronze medal in 2007 then led to him being picked up by Sengoku and placed in Yoshida Dojo as one of the first two fighters sponsored by the promotion.

Life was also not easy in Japan initially. Being the only Venezuelan and speaking little Japanese led to problems.

"There were a lot of bullies. A lot. I was bullied in my first, second, third and fourth years at university. It was very lonely."

The massive scar on Blanco's left fist is indicative of how unsuccessful some of the bullies were, but still it left a lasting impression on him.

"When I was a first year university student I ended up in a fight with my classmate. I hit his teeth and cut the back of my hand and it got infected so I had to be hospitalized for one week. I want to go back in time in a time machine and beat up everyone. If I had a time machine I'd go back and fight everyone."

More on Sengoku's talent development program plus a HL reel of Blanco in the full entry.

This Jordan Breen piece from early 2009 talks about the launch of Sengoku's fighter development program:

In July (2008), WVR announced the signings of developmental talents Maximo Blanco, a Pan-American games bronze medalist in freestyle wrestling, and Shigeki Osawa, an All-Japan University champion and World Intercollegiate champion from wrestling powerhouse Yamanashi Gakuin University. Blanco has already gone on to compete in Pancrase and Sengoku, while Osawa is expected to begin his MMA training after graduating from YGU in March.

On Feb. 1, WVR staged their first open tryout in which some 70 applicants worked out, and a total of 14 fighters were chosen by prominent gyms Grabaka, Shooting Gym Tokyo, P's Lab Tokyo, Wajyutsu Keisyukai, and the Yoshida Dojo. WVR will be paying these developmental fighters' gym dues and looking to foster their growth toward Sengoku, meaning many will likely cut their teeth in the amateur Shooto system, fighting in regional amateur tournaments in the near future.

I have to say I've always rooted for World Victory Road against DREAM and while I've given up on them many times, they do seem to be slowly but surely building something worthwhile even as they've lost their biggest sponsor and most prestigious fighting camp.

Here's a very fun HL video of Blanco. He reminds me of a lightweight Jon Jones or Charles Oliveira with wrestling instead of BJJ: