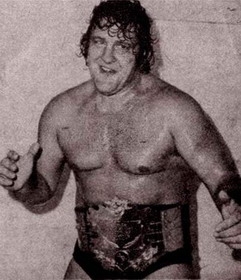 I'm terrible with dates and planning ahead so I almost never remember anyone's birthday. That's why I periodically recognize an MMA pioneer with a "Happy Belated Birthday" shout out.

The previous installments were Helio Gracie (sadly on the occasion of his final birthday) and Gene Lebell. I've been on the lookout for veterans to recognize, but inevitably whenever I think of it, their birthday ends up being six months away.

Thanks to K.J. Gould at Cage Side Seats I was informed that yesterday was catch wrestling legend Billy Robinson's 71st birthday.

The reason Billy Robinson should matter to MMA fans? He is a direct connection between modern MMA and the nearly lost art of catch wrestling.

Robinson trained Kazushi Sakuraba and Josh Barnett in catch, passing on the art he learned directly from Billy Riley at the legendary Snake Pit in England.

When pro wrestling became virtually 100% "worked" (pre-determined) instead of a "shoot" or legitimate sport after World War II, Robinson was one of a handful of wrestlers who kept the old knowledge alive. Along with Karl Gotch he is instrumental in having taught the secrets of "hooking" (submission holds) to a generation of young Japanese wrestlers who would go on to develop proto-MMA in Japan.

Here's more on Sakuraba's and Robinson from Sakuraba's Wikipedia entry:

After considering the mixed martial arts organization Pancrase, he ultimately chose the UWFi, a professional wrestling league that was nonetheless known for its highly technical and realistic-looking bouts. His time in the UWFI would prove to be a formative experience for Sakuraba; it was there under the tutelage of Billy Robinson that he received his initial instruction in catch wrestling. It is catch wrestling that would serve as the base of the unorthodox ground-game that would later lead him to success in the Pride Fighting Championships.

Robinson also taught Josh Barnett the art of catch wrestling. Here's a translation of a GONG magazine interview with Barnett talking about meeting Robinson for the first time:

SW: How did you meet Billy Robinson?

JB: I met Billy through the UWF-Snakepit. I was told about the Gym through some friends (Gryphon I think) and really wanted to check it out. At the time only Oe-san and Miyato-san where the only ones there but Miyato-san told me all about Billy and that I should be sure to come when Billy is in. While I lived in Japan, every time I was in Tokyo I would go to the UWF- Snakepit to train and Billy worked with me a lot. I trained there for many of my fights with Oe-san training my striking and Billy with Miyato-san improving my wrestling skills.

SW: What was the first meeting like? What did you do and talk about?

JB: I didn't what to expect but he had a very high reputation from many people so I felt very strongly about wanting to learn from him. First thing was first and beside an introduction I got to know Billy by getting on the mat and wrestling! He taught many finer points to the double and top wrist lock that night, showed me what I call "the Billy Neck Crank" and coached me and Miyato-san as we wrestled.

K.J. Gouldalso pointed out to me that Robinson's lineage and influence extend into the American Kickboxing Academy by way of Frank Shamrock's (who originally co-founded the gym) instruction of  "Crazy" Bob Cook. I would think that Cain Velasquez and Josh Koscheck would profit from studying with Billy as they prepare for their wrestling-focused battles with Brock Lesnar and Georges St. Pierre. They're likely to find themselves in some positions from which a top catch wrestler could find a submission where a BJJ guy wouldn't know to look.

In the full entry are a couple of training videos with Billy as well as videos of some of his epic worked pro wrestling bouts with fellow MMA grandfathers Karl Gotch and Antonio Inoki. There's also a nice concise bio of his pro-wrestling career.

See also my reviews of Mark Hewitt's Catch Wrestling and Catch Wrestling Round 2 and this early installment of my MMA History series: Proto MMA Evolves Out of Worked Pro Wrestling in Japan. Plus my piece on the legendary catch wrestling vs judo feud of the 1920s.

Found this bio of Robinson on YouTube along with the video below of his top 10 pro wrestling moves:

Billy Robinson was quite arguably the best pure wrestler to come out of Great Britain in the 1960s. Born in 1939, he spent his childhood honing his grappling skills, and won quite a few amateur wrestling competitions before deciding to turn pro. Upon that decision, he joined the legendary Snake Pit, the same school that trained the likes of Karl Gotch. Here, Robinson learned the finer points of Catch Wrestling, and survived through training regimens and living conditions rarely seen outside of the dojos in Japan. Robinson survived, and made his professional debut in 1960. He won his first title, the European Mid Heavyweight Title in 1961. Arguably his biggest win in his early career would come in 1969, when he defeated Killer Karl Kox for the IWA Australia World Heavyweight Title. He would also win the Stampede North American Heavyweight Title, defeating Abdullah the Butcher. In 1970, he joined up with the AWA, and found tag team success while there, holding the AWA World Tag Team Titles twice, including once with Verne Gagne himself. In 1975, he journeyed to Japan, wrestling the legendary Antonio Inoki, as well as Jumbo Tsuruta, whom Robinson defeated for the NWA United National Heavyweight Title(now a part of the Triple Crown Heavyweight Title). As the years wore on, Robinson would still press on, even defeating young upstart Rick Martel for the Montreal International Wrestling Title. His last match would come in 1992, wrestling fellow legend Nick Bockwinkle in an exhibition match for the UWFi promotion in Japan. Robinson's training in the Snake Pit certainly paid in dividends. The skills he picked up stayed with him for his entire career, making him one of the most respected technical wrestlers of his time. He could slam his opponents with his Backdrop Backbreaker, and just as easily stretch them into submission with the Boston Crab or the Abdominal Stretch. Robinson is also one of the earliest known users of the Belly to Belly Piledriver, commonly referred to as a Tombstone Piledriver today.

It's kind of surprising to me that it's taken so long for American wrestling-based MMA fighters to start studying catch. It teaches a wide variety of set ups and submissions from top control positions that wrestlers are more likely to find themselves in than the traditional BJJ positions. I predict we'll see more and more wrestlers learning catch and applying it to MMA in the next decade.