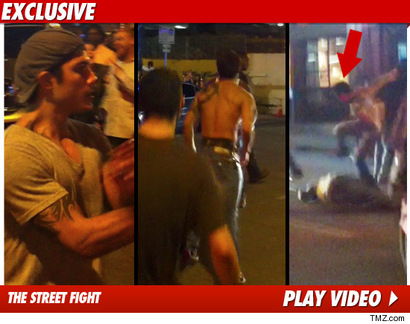 The MMA community was abuzz with the TMZ video of Roger Huerta serving up justice on the streets of Texas. Our own Kid Nate looks at the legal consequences in another post. This one is all about Huerta's cheering section:

Joe Rogan: I'm down with Roger Huerta. Karma is a bitch, and so are you if you sucker punch a chick. @rogerhuerta

Josh Barnett: "Just to be clear to anyone who has asked I support Roger Huerta 100%. The guy Roger put the boots to earned it.

Bruce Buffer: Congrats to Roger Huerta 4 being a man n taking care of business after seeing a man KO a woman in Austin, TX n then KO'g the A-Hole! Solid!

Dana White: "In no way do I condone street fighting, but when a guy puts his hands on a woman he deserves to be knocked the f*ck out. Good for Roger."