That's a great statement, isn't it? This headline (and fanpost) was inspired by a line from Kid Nate's piece earlier today regarding Carwin, Toney and Cheating. and one small point he made among many:

The handful of fighters who apparently don't know enough about PEDs to beat the tests get relentlessly crucified while the guys who are a little smarter get away clean. This is a classic illustration of the American "just don't get caught" ethic.

Look at that last line again. What does that mean? First of all, to categorize this notion as strictly American is nonsense. Don't mistake this for some USA, USA flag-waving session, but merely to expand this to the rest of the world. There are countless examples of this in the sporting world; to mention them all could take all night. I'll certainly list a few, but to even limit it to sports isn't doing that tidbit enough justice. Corruption in some of the more dictatorial regimes all over the world are an obvious one. Even something as simple as the practice in China to counterfeit computer software (and hardware) - ignoring North American and European patents while doing so - is a fairly obvious point to make. Still it bears noting that one part of that line is just silly.

The other part, however, is the real reason here. "Just don't get caught." This is a statement, that if I were to be honest with myself, I have to endorse. In all truthfulness, I think anyone who has ever played a sport where fouls occur and can go unnoticed agrees with this. Seriously, if you've ever played football, and you've never once tried to get away with a little something extra on the field, you really weren't trying. I'll say the same for any contact sport, all the way down to that prissiest of ones, soccer. Do we not deride soccer in part because of the flopping and diving? All that is is trying to get away with one. It's cheating, but not if you don't get caught. 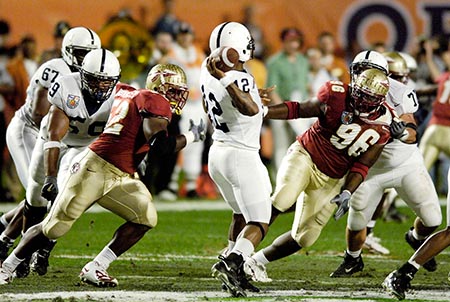 There was no penalty called on that play. Now MMA isn't a team sport and between that factor and with tons of cameras everywhere, it's rare for a penalty to go unnoticed by either the fans or judges. We mock Koscheck and Varner for their histrionics because everyone in the world saw it from multiple camera angles and they're the only two doing any action. In an 11-on-11 sport, you can't (and don't) see everything live, so there are certain acceptable standards one expects from each other. Linemen hold. Nearly every single football play has what is the literal definition of holding. It has become a standard bending of the rules to where only the obvious ones get called, much like palming a ball has become in basketball.

A runner may ward off opponents with his hands and arms but no other player on offense may use hands or arms to obstruct an opponent by grasping with hands, pushing, or encircling any part of his body during a block. Hands (open or closed) can be thrust forward to initially contact an opponent on or outside the opponent’s frame, but the blocker immediately must work to bring his hands on or inside the frame.

Now this personal belief of mine does not extend to illegal PED's. Is this some arbitrary line where I condone one kind of cheating while condemning another? To some extent, sure. It's "my" morality and way of looking at the situation, but I feel there's a pretty firm distinction that one can make here. An extra grab and tug is not on the same level as steroids, and I think that's fairly obvious. Sure one can devil's advocate otherwise, and there are examples where a minor "you ain't tryin if you ain't cheatin" foul has led to someone's injury, but those are a very rare exception and not the norm. Think of Flozell Adams tripping Justin Tuck last year and him hurting his shoulder (Dallas Cowboys vs N.Y. Giants) due to the fall. That's so outside the norm that to lean on that is so far beyond ludicrous, it's plaid.

PED's in a combat sport like MMA have huge repercussions due to the nature of the beast. You're directly attempting to inflict physical violence upon another person. The consequences of using illegal methods to directly enhance your ability to inflict that violence can in no way be compared to grabbing the cage out of reflex or butting heads a bit on a takedown attempt. To rehash all the problems with 'roids isn't worth the time or effort anymore. They're unhealthy for yourself and a danger to the opponent. etc. etc. etc. Nate is right: the system is not functioning because we're willfully ignoring much of the scrutiny that we should be doing. We catch the fake knees to the hair but do nothing about the 4 months when a fighter is not in the ring. We're allowing fighters to not just break or bend the little rules, but to circumvent the big ones as well. We're allowing "It Ain't Cheating Unless You Get Caught" to infiltrate far deeper than what it meant for so long.

People will always try and get an edge in competition, even a tiny one like a brief grab of the shorts to improve position. It's at the big, unsafe levels that more needs to be done.

EDIT: I meant to put in earlier that not only do I feel the "little cheating" is OK, but that I was an active participant as well. I played football in school up through college (O-line and later fullback) and I was one of the grabbiest mothers you ever played against. I'm pretty sure I have a lifetime record of one flag thrown on me for anything other than false starts. I never got caught.