Middle Easy put up a very interesting article where they posted photos of KJ Noons and Mo Lawal using some sort of inhaler prior to their fights at Strikeforce: Houston. Here's the photo of Mo using the canister in the cage: 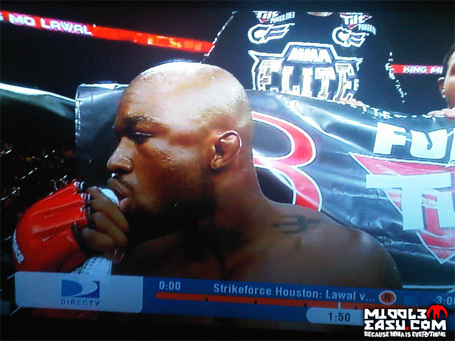 Middle Easy would go on to confirm the exact brand of portable oxygen can the fighters were using. For those of you wondering what the big deal is if it was just oxygen, they cover that as well:

For those of you wondering what the big deal is, the concept of breathing pure oxygen can help a free-diver double submersible time. It also helps climbers breathe at high altitude so that they can continue to ascend mountains at an normal pace, despite thin air. The entire concept behind the compressed-oxygen spray is to keep an athlete from tiring out, which would be OK, except when one person has this cardio-boosting puffer while his opponent doesn’t.

I have talked a lot about Luis Resto in the past. Resto is the boxer whose trainer, Panama Lewis, removed the padding from his gloves before his bout with Billy Collins which ended Billy's boxing career and led to a car crash a few years later that most believe was suicide. As pointed out by Middle Easy, Resto would admit that Panama put crushed up asthma pills in his water bottles to add the same kind of oxygen boost. It is believed that Panama did the same thing for Alexis Arguello in his first bout with Aaron Pryor Aaron Pryor in his first bout with Alexis Arguello. It's an old school, illegal trick in boxing used to achieve that same energy level boost as this canned oxygen.

This is a situation that demands some sort of answers from both the state of Texas and Strikeforce. Someone needs to tell us what happened and why this was allowed to happen. Luke Thomas has Scott Coker on MMA Nation tonight and I'll be listening in hopes that this gets brought up.

The combination of the lack of drug testing and what seem to be illegal (in the sport) oxygen canisters being used just reinforces my belief that major MMA needs to stay away from Texas until their athletic commission gets their act together. I'll be reaching out to the athletic commission to see if I can get a statement from them on this situation.