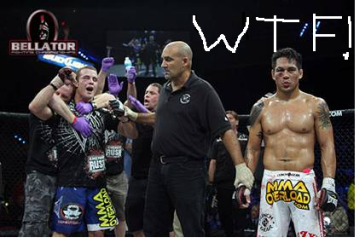 I was very disappointed that Toby Imada lost a split decision last night to lose the lightweight tournament final to Pat Curran, but what really set me over the edge was the Bellator press release that focused on Curran's "Cinderella story" without even acknowledging the controversy behind his victory.

The controversy I'm talking about is the fact that Imada clearly won the fight.  Throughout the entire three round affair, it was Imada, not Curran who was pressing the action.  Imada continuously moved forward throwing punches and kicks until he could back Curran against the fence.  Once there he unloaded many knees to Curran's midsection and legs.  Imada was also successful on 3 takedown attempts, although Curran quickly got back to his feet afterwards.

There are fighters out there who can win a fight by backing up, Lyoto Machida for example, but he does that by completely avoiding damage while inflicting some of his own.  Curran was eating lots of punches and knees throughout the fight, and while he did land a couple of the hardest punches of the fight, that does not make up for losing the battle of cage control.  Time and time again Imada would have Curran pressed against the fence in a body lock throwing knees and Curran appeared defenseless to stop it.

Curran's best offense came in the third round when he rocked Imada with a hook that opened up a big cut on his eyebrow as well as nearly swelling his eye shut.  What happened next baffled me.  With Imada backing up against the cage in a defensive position for the first time all night, Curran stopped attacking and backed off into the center of the cage.  At the time myself, the announcer Jimmy Smith as well as nearly everyone in attendance had the first 2 rounds 20-18 for Imada so we were all wondering "why the hell is he not trying to end the fight when he's about to lose a decision, does he know something we don't?"

Apparently so, because after the fight concluded, the cage announcer stated that there was a split decision.  I was appalled by the fact that any judge had sided with Curran at all, but then they announced that Curran had won the fight.  I was angry, so were many commenters on all the websites covering the event.  I'm sure Bellator received more than it's share of angry questions to it's facebook and twitter accounts as well.

Our very own Brent Brookhouse couldn't have said it any better:

That ranks among the worst decisions I have ever seen in my life.  That is so ungodly bad I have no words.

You know it's bad decision when you are fighting in front of a hometown crowd, and even they boo the decision when you win.  That's what happened to Curran.  Bellator tried to do some damage control by playing up the story of Curran who had been the underdog throughout the tournament defeating GSP training partner Mike Ricci as well as the much lauded Roger Huerta in the semi-finals but that didn't make up for this.

Toby Imada deserved that victory.  He deserved that $100,000 grand prize and he most definitely deserved another chance at Bellator lightweight champion Eddie Alvarez.  Bellator made it up to Ryan Thomas after he was screwed over by the referee in his first round fight against Ben Askren.  I can only hope that they make it up to Toby Imada somehow, who's interview quote was a self-defeated theme we continue to hear time and time again.

"That’s what I get for leaving it up to the judges."

Was Curran's victory over Imada one of the worst judging decisions ever?