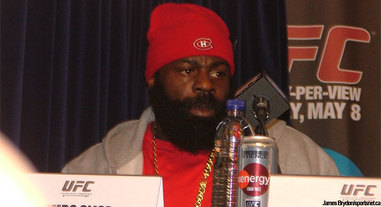 This exchange is fascinating and music to my ears:

Helwani: Just a couple more things before we let you go here. You said Kimbo Slice is done [in the UFC]. Why?

White: First of all, Kimbo took me up on the challenge. Like I said before, he could've done a lot of freakshow fights, done a lot of different things. [He] stepped up to the plate, he took the challenge, came on The Ultimate Fighter and I'm happy to have met Kimbo Slice. He's not who I thought he was. He's a good guy, he came in, he worked hard. He's done everything he could to evolve as a mixed martial artist and he won that fight. He won that fight to get him this fight...against Houston Alexander.

And he lost tonight. You know, Kimbo Slice is no different than any of the other guys who don't make the cut and end up getting cut from the UFC. He's impressed me as a human being and as a fighter, and I like him and the guys who represent him very much. I'm glad to have met Kimbo Slice.

Helwani: But there's still no denying he's a huge draw, so as a promoter you wouldn't want to put him out there one more time?

White: It's not about being a huge draw. It's about having the right to be here. Because whether you're a big draw or not, this is about the sport and about who's the best and, you know, there's other people out there who deserve to be in the UFC.

1. There is a deep cynicism within MMA that the ability to draw PPV buys or television ratings is such a trump card that considerations related to sport are a misplaced priority. Yet, those supposedly meaningless values are precisely what we are encountering here and it's a hugely welcome statement from White.

I cannot commend White enough for this. And it's very savvy, really. What White does is allow those with inherent promotional ability (Kimbo Slice, James Toney) entry into the UFC. It's a trade off. He'll take whatever ratings or PPV buys they can deliver upfront with the Sword of Damocles constantly hanging over their head: either you can win or you can't. They'll get their chances, they'll get their opportunities, but ultimately if they cannot win then they are taking up roster space.

2. Based on White's statement and what we know about Joe Silva's matchmaking needs, there is a finite amount of heavyweights allowed in the organization. There is a need for overall roster flexibility and fluidity. When there is one who likely cannot beat any other heavyweights, it's hard to make the case (particularly considering White's priorities) he should have a position at the expense of more talented fighters.

3. Some will ask, quite rightly, whether getting rid of Slice when he still has promotional value makes sense. Strikeforce could easily pick him up and use him for ratings draws. But by having the UFC cut him for not being able to compete at a sufficient level, they are letting the world know this is outlet mall talent. White and the UFC did quite a bit in rehabilitating Slice's image, something I'm sure the Floridian is thankful for. But now that image of a hardworking everyman is being defined again: despite his pleasant attitude and cool demeanor, he simply cannot compete at the elite level. He can compete at other levels, but not where it matters where the best are trying to assert themselves. Genius.

4. Strikeforce could pick him up, but they're going to have to sell his redemption song again. It can be done and I suspect they'll give it a try, but the Scarlett Letter on his chest is going to be hard to wash off once the UFC has blessed you.

5. I still believe Kimbo has substantial drawing power, but the community should consider something about Slice. He is not allowed to lose forever. And it's very lazy and reflexive to suggest there's no cost to these losses and that he'll continue to be as viable a product as always. The next chapter in his career will tell us a great deal, but he cannot keep losing without cost to his ability to deliver ratings. This is the real world and it does matter if you lose, particularly when you rehabilitate your image in such a way that you're trying to compete as a MMA fighter on MMA's terms. You're trying to prove you belong. If you consistently prove you don't belong when trying to prove you do, that begins to add up.

We aren't at a point where he can't deliver ratings. He can and will. But as Mitrione proved, any heavyweight willing to throw leg kicks and mix up their game is going to smash him to pieces. The guy simply cannot fight. They can give him tailor made fights, but there's baggage that comes with that and it's still no guarantee he can win. The waters at 205lbs aren't much easier to swim in and the clock is constantly ticking on his ability to compete at all.

The Teflon Don? Not for much longer if he's not winning. The crowd willing to watch him lose ad infinitum is a great deal smaller than the one wanting him to prove himself. The audience willing to give him a shot is more fickle than loyal.