The Redemption of Mauricio "Shogun" Rua

Share All sharing options for: The Redemption of Mauricio "Shogun" Rua 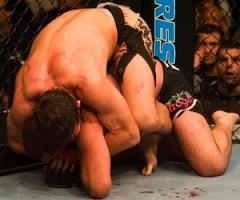 In September 2007, Mauricio "Shogun" Rua made his much-anticipated UFC debut against Forrest Griffin.  In 2007, the big debate among MMA fans was not over who the best pound for pound fighter in the world was.  Rather, it was over which stable of fighters was better: Pride fighters or UFC fighters?

Heading into UFC 76, Mauricio "Shogun" Rua was a consensus top 3 Light Heavyweight.  Many experts considered him the top 205 pound fighter in the world given his dominant wins over Ricardo Arona, Alistair Overeem, and Rampage Jackson.  He also participated in and won the fight of the year against Antonio Rogerio Nogueira in 2006.  Most expected Shogun to walk right through Griffin, who had been knocked out by Keith Jardine just 9 months earlier.

At the time, despite the consensus that Shogun would win, many fans had lingering doubts about Shogun.  Mirko CroCop had recently been destroyed by Gabriel Gonzaga, and Antonio Rodrigo Nogueira came dangerously close to the same fate against Heath Herring.  Was the long-held notion that Pride had the superior fighters a myth?  This fight would tell the story, supposedly.

It was apparent as the fight started that this was not the Shogun fans had come to love in Pride.  He was flat footed, lethargic, and unable to handle Griffin's size.  His punches had nothing behind them.  Shogun kept it close for two rounds, but succumbed to Griffin's pace in the third and suffered a devastating and humiliating loss.  The win launched Griffin to another level of stardom, and supposedly put the nail in Pride's coffin.  Ringside reports even suggested that UFC officials were ecstatic that "their guy" beat Shogun.

Shogun took scorn from all directions after the fight.  UFC loyalists mocked the idea that he was the top fighter in the world.  Pride fans blamed him for embarrassing them.  Stories of his knee injuries only brought on further mockery.  Shogun underwent surgery, and was set to face Chuck Liddell at UFC 85.  In the midst of his preparation, Shogun blew out his knee again, and underwent a second surgery.  When Shogun finally returned to face Mark Coleman, he looked even worse than he did against Forrest.  He gassed after one round, and actually found himself in very compromising positions on the ground.

Most experts wrote Shogun off after his fight with Mark Coleman.  I fully admit that I was one of them.  I couldn't explain what happened to Shogun; I resigned myself to believing that his excellence in Pride must have been a result of the lack of drug testing.  I didn't buy into the injury story.

UFC 104 was Shogun's true UFC coming out party.  He shocked the world by taking the fight to Machida, breaking his ribs and decimating his legs.  If the measure is damage, the fight was not close.

At UFC 113, Shogun has the chance to complete his long journey to the UFC title and achieve a level of personal redemption that most fighters only dream of.  One can only imagine the mental anguish he must have endured following his loss and throughout his endless recovery period.  This Saturday night, he can put it all behind him and achieve the level of success most experts predicted he would have in 2007.