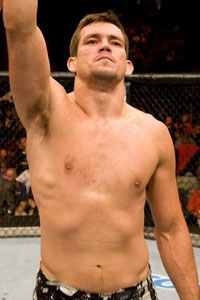 At this point, it's close to a cliché.  All discussions about beating Anderson Silva sound something like this: person A claims the key is getting him to the ground, and then person B scoffs at the idea that Silva has a poor ground game.  Both points are valid.  The key to beating Anderson is getting him to the ground, but his ground game is also excellent.  It's just less excellent than his striking game.

For some reason, Silva's doubters continue to point to a fight with Travis Lutter that took place over 3 years ago as an example of the way to beat Silva.  Since that fight, Silva has put in a tremendous amount of work to shore up his liabilities on the ground.  He's made significant strides in his jiu jitsu game, and he's put in a tremendous amount of effort to improve his wrestling game.  The effort has paid off.  He was able to pull off a fight-changing switch against Nate Marquardt, easily nullified Franklin on the ground in their rematch, choked out Dan Henderson with ease, and easily stymied Thales Leites when Leites finally got the fight to the ground.

The problem for Maia isn't necessarily getting inside and getting this to the ground.  Virtually all of Silva's opponents who have tried to get it to the ground have succeeded at least once.  The bigger problem for him is that Anderson is good enough and crafty enough to nullify Maia on the ground by grappling defensively, and it's unlikely Maia will get two bites at the apple.  Maia's best hope is to execute a throw and wind up in half guard or side control.  If this happens, I fully believe he can submit Silva in short order.  But if he pulls guard or simply winds up in Silva's guard, I don't think he'll be any more successful than he was against Dan Miller at UFC 109 in the third round.

I disagree with the majority consensus that this fight is less interesting than Vitor Belfort vs. Anderson Silva.  Unlike Vitor, Demian Maia has a realistic path to victory.  Submitting Anderson Silva is not impossible; it's been done before, and I believe it will happen again before Anderson retires.  Will Maia be the one to do it?  I doubt it, but he's got enough of a chance that I'm really looking forward to seeing what gameplan he brings to the table this Saturday.