Quote of the Day: BJ Penn Tells an Interesting Story About Dana White

Share All sharing options for: Quote of the Day: BJ Penn Tells an Interesting Story About Dana White 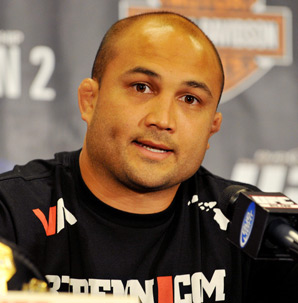 K-1 was offering me $187,500 per fight - five times what the UFC was offering - and I was still willing to stay with them for one-third of that amount. This was when the relationship took a turn for the worse, and my view of White changed drastically. From that point on, I knew when it came to money, we couldn't trust him to treat us right. Did I like him at the dinner table? Sure. But at the negotiating table? Not at all. The pressure to perform and safeguard other people's money had changed him, even though he was constantly bragging to anyone willing to listen about how 'big this thing was going to be.' Things between us would never be the same.

When it was finally official I was going to fight in Japan, White called me up and told me his true feelings. 'You motherfucker! You're fucking done! You'll never fight in the UFC again! You're finished. You're scorched earth, motherfucker. Scorched earth. Don't call me crying saying you want to come back because you're fucking done!' And on and on and on, like a true professional - even going so far as to tell me I would never see my face again in a UFC video, promotion, or anything else. He also planned on removing my fight with Hughes from the UFC 46 DVD so no one would even know who I was. 'It doesn't have to be this way,' I told him. 'You know it wouldn't take that much to make this work.' But he just kept yelling.

--BJ Penn, discussing Dana White's reaction to his decision to leave the UFC after defeating Matt Hughes at UFC 46.  This is from BJ Penn's new book.

While I haven't read the whole book, it's very likely that White's anger over Penn's book stemmed from this section.  The biggest surprise to me is that Penn would come forward with a story like this while he is still an active UFC star.  It's one thing to release a tell-all book after retirement, but one has to wonder what the motivation was to tell a story like this now.

As far as the veracity of the above story, I am strongly inclined to believe it is true.  I've heard from enough agents and fighters about breakdowns in communication with the UFC to know what happens when they think someone is trying to screw them over.