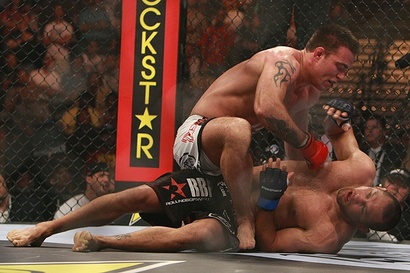 Jake Shields shocked the world by shutting down an out of shape and visibly aged Dan Henderson to retain his Strikeforce middleweight title.

Shields went into the fight a free agent, despite his title. UFC head Dana White has spoken openly of wanting to sign  Shields. It's no secret his welterweight division needs a challenger for George St Pierre.

Ironically Dan Henderson had just signed with Strikeforce after failing to come to terms with the UFC post his Knock Out of the Year against Michael Bisping at UFC 100. Dana White's eye for talent and shrewdness is as good as ever. CBS is now stuck with an expensive and apparently done Dan Henderson and Jake Shields is free to "move up" to the UFC.

Dan Henderson landed his big right hand early and dropped Strikeforce champ Jake Shields immediately. Shields survived and even threatened a leg lock from his back but Henderson walked away. Back on the feet, Henderson immediately staggered Shields with another right. Shields survived that and the follow up series of punches. Henderson looked much heavier than he did in his last fight at UFC 100. Then Shields shot in and for a moment appeared to threaten to put Henderson on his back. But Hendo quickly wrestled back to standing position. Shields actually landed a left to end the round. Both fighters looked to continue engaging at the end of the round.

In the second, Shields managed to get the fight to the ground and mounted Henderson. Shields landed punches from the top position as Henderson fought to ride out the threat from Shields. Shields scored and threatened an arm triangle but wasn't devastating from the top. But the punches accumulated as the gutsy but gassing Henderson fought for his life. Shields came close to finishing the fight but Henderson somehow survived. Great fight so far.

Round three saw Henderson come out looking heavy, gassed and crouching to protect against the take down. Shields shot for a single leg and nearly got it but Dan Henderson still has incredible hips and power and he got back to his feet. But Shields shot again and finally fought Henderson back to his back. Henderson got closed guard. But Shields quickly passed to side mount. Again Shields landed some shots but not as effectively as in the second. Then he hooked Dan's chin and went for a guillotine from top position. He used that threat of the choke to smoothly take mounted position. Henderson bridged with legs off the cage, but Shields stayed on top and scored with punches. Then he went for an arm and Henderson was saved by the bell.

Going into the championship rounds, Henderson came out throwing kicks. Shields shot but Henderson fought him off. Shields dove for the leg again and Henderson's hips came out from under him, but he held onto a high crotch on Shields and then landed in a modified crucifix. Then Shields got him down again. Soon he had side mount and was threatening a kimura. But Dan fought it off. Then Jake reclaimed mount and pounded away. Again Henderson survived.

In the final round, Henderson threw a totally telegraphed, half-hearted right hand to start the action. But Shields had Henderson flat on his back within the first minute of the round. Had mount by 3:38. Henderson had no answers. Shields again threatened for the kimura, moving back to side mount. Then back to mount to threaten an arm triangle. Then worked to get Henderson's back where he could attack the neck. Then Shields went for an arm bar and then transitioned to a knee bar.