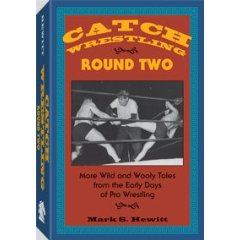 Mr. Hewitt was kind enough to send me a review copy, but you can order from Paladin Press -- it's a bit expensive at $40 a copy, but keep an eye out for sales and discounts, Paladin is pretty good at moving product.

The book itself is a very informative read if you're interested in the old days of pro wrestling and the roots of MMA. The chapters focusing on the early days of the Gracie Brothers in Brazil and the 1908 Alhambra Tournament in London featuring Mitsuyo Maeda, the man who taught jiu jitsu to the Gracies.

There were several new bits of information --- all based on newspaper accounts of the day, Hewitt is a meticulous researcher -- in the Gracie chapter. There is discussion of Helio Gracie's bout with wrestler Fred Ebert, Carlos Gracie's feuds with jiu jitsu practioner Geo Omori and wrestler Manoel Rufino, George Gracie vs Taro Miyaki and more.

In addition to the primary source research, Hewitt's catch wrestling perspective brings a valuable understanding of the opponents the Gracies faced, at least those who were known on the North American wrestling circuits. The Gracies' official history tends to inflate the credentials of their vanquished opponents. Hewitt clears away the hype.

In addition to those chapters, the book has chapters focusing on such legends of the old days as Ed "Strangler" Lewis, John "Tigerman" Pesak, Joe "The Scissors King" Stecher, Earl Caddock Stanislaus Zbysko, and Lou Thesz. There are chapters dedicated to bouts between boxers and wrestlers from the 1920s, 30s, 40s and 50s as well.

Much of the book focuses on the 1920s and 1930s, a transitional era for pro wrestling. Most of the top stars were still capable catch wrestlers who could hold their own in a "shoot" match, but the pressures of the box office caused promoters to frequently book star attractions who couldn't wrestle like college football stars Gus Sonnenberg and Wayner Munn. This left the promoters vulnerable to being double-crossed by wrestlers who were booked to lose worked matches against the paper tiger champs and decided to go ahead and make it a real shoot.

This would lead to some amazingly intricate plots and counter-plots to get the title back. Generally the weak champions would be protected by a stable of "policemen" -- skilled grapplers who would beat any potential challenger who might not want to play ball with the "syndicate".

It's all very Byzantine and must have made for a very fun experience for fans of the day -- those who weren't losing money betting on fixed matches at least.

The book is pretty choppy though, Hewitt tales his tales chapter by chapter and doesn't really create an overall narrative. I'm sure it's fairly impossible to write a comprehensive history of a "sport" as shady as pro wrestling, especially during the years it transitioned from a mostly sporting proposition to an entirely worked game.

I'd also like to see more coverage of Ad Santel, the catch wrestler whose bouts against the pride of Japan in the 1920's are the reason the Japanese have always been so respectful of pro wrestling.

But if you're interested in learning more about the roots of MMA -- and MMA is directly descended from the old Catch Wrestling circuit, both on the Japanese and Brazilian sides -- Hewitt's book is an invaluable resource.