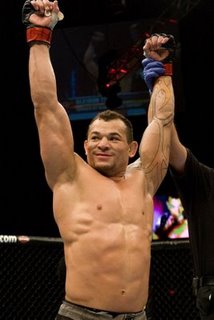 So, lately i've been thinking about how omnipresent an issue weight cutting (& the pros/ cons thereof) is in MMA/ Wrestling/ Boxing etc., and I thought i'd do a little research on the topic.  Partly inspired by Matt Pitt over at Sherdog's "Fistic Medicine" column (esp the articles about the science behind a KO, and the one about brain trauma in MMA/ boxing), I think it would be interesting to see what kind of info I could dig up about weight cutting.

You always hear people talking about how weight cutting should be banned from the sport, how it's bad for the athletes & gives an unfair advantage to wrestlers, etc etc ad nauseam.  However, after doing some rudimentary research via Google, here's what I took away: cutting offers a 2- pronged threat to an athlete, physical & mental.  The main physical threat being dehydration & the second (in extreme cases) being the possibility of hypothermic death (either by heart attack or kidney failure).  Psychologically, the toll of an athlete nearly starving their bodies of food & water in the days leading up to the fight dramatically increases the risk of eating disorders, and causes serious hormonal imbalances & mood swings.

The picture on the right shows UFC fighter & behemoth lightweight Gleison Tibau, who allegedly cuts from the neighborhood of 190 pounds.

First, i'll delve into the problems dehydration presents.  Specifically, hypohydration, which refers to "dehydration induced prior to exercise".  According to the US National Library of Medicine's website (Link-  Effects of dehydration on exercise performance), weight cutting negatively effects aerobic endurance & reduces plasma volume:

The effects of hypohydration may vary, depending on whether it is induced through diuretics or sauna exposure, which substantially reduce plasma volume, or prior exercise, which has much less impact on plasma volume. Hypohydration reduces aerobic endurance, but its effects on muscle strength and endurance are not consistent and require further study.

In Layman's terms, weight cutting reduces your body's ability to deliver oxygenated blood through your body because of reduced plasma volume, which negatively effects Cardio/ aerobic endurance.  That's why guys like Guida, Edgar, Faber, & WW Diego Sanchez have seemingly endless gas tanks while maintaining frantic tempos in their fights- because they don't cut much weight.  BJ Penn has excellent cardio @ LW because he walks at around 165 during his training camps; You'll never see Fedor gas, because he works very hard on his cardio & doesn't have to deal with the strains of weight cutting.

The second (and more rare, but severe) health threat is from extreme weight cutting- and that is the possibility of death.  An incident in the late 90's with NCAA wrestlers opened eyes about this (link to article- Cutting Weight):

In 1997, three college wrestlers made national headlines, dying within 33 days of each other. Coming from Michigan, North Carolina, and Wisconsin, these dedicated athletes died from the same cause: weight cutting. In all three cases, the students experienced dehydration resulting in hypothermia after they layered on clothes and did endless workouts in heated rooms. Unfortunately, they out-worked their bodies. The perspiration they produced cooled them to the point of hypothermia resulting in heart attacks and kidney failure, all common effects of extreme weight cutting.

Basically, the gigantic weight cut attempted by these wrestlers were too much for their bodies to handle, and they died from heart attacks & kidney failure.  Now, some camps in MMA are renowned for their weight cutting abilities (ATT comes to mind, with fighters like JZ, Tibau, Alves, Gouveia @ 185, etc), but how much is too much?  With Tibau allegedly cutting from 190+, he's losing upwards of 30 lbs- which is almost 15% of his body weight, within the period of a month.  That's just not healthy, and even though he has a decent size/ strength advantage, he's still lost to fighters such as Griffin, Nick Diaz, Joe Daddy, & Guillard.  Will there be a death or serious health incident in MMA because of extreme weight cutting?

Finally, the psychological threat of eating disorders due to weight cutting is present.  Fighters, bodybuilders, wrestlers, etc are all known for eating & drinking next to nothing in the days/ week preceding a match, shredding every available ounce of fat & water in order to have a size advantage.  What this does to the brain is bad, though.  It causes hormonal imbalances which cause mood swings, depression, & eating disorders.  In fact, in the "Weight Cutting" article, the writer talks about the positive correlation between cutting & eating disorders:

With 81 percent of wrestlers cutting weight, there are many unique methods to achieve the task... Consequently, they [wrestlers] account for three-quarters of male athletes with eating disorders. Eating disorders claim 300,000 lives a year.

Do we really want our favorite athletes to suffer through the trauma of having bulimia, anorexia, etc?  Guys like Fedor (who is notoriously a little doughy around the midsection) have said that, simply put, they are fighters & shouldn't have to worry about extreme dieting; by eating healthy & exercising vigorously, Fedor is able to maintain a healthy psyche, and as we all know- it is his composure and mental unflappability that make him one of the greatest fighters of all time.

So that about sums it up.  I know that weight cutting will never truly be an issue that can be solved, but I do think it can be regulated (for example, the NC athletic commission has a rule that says there can't be a 13 lb. differential between the weigh ins and the fight, something which the aforementioned Tibau is preparing for), as the NCAA has been doing as of late:

Following these deaths, the NCAA took steps to make wrestling safer by banning cutting techniques such as training in a room hotter than 80 degrees, self-induced vomiting, and extensive food or fluid restrictions. Following the actions of the NCAA, even high schools have taken precautions. The NCAA requires wrestlers to take hydration tests, checks their body fat, and restricts the amount of weight they can lose.