Going into UFC 124, Josh Koscheck was sure that UFC welterweight champion Georges St. Pierre was afraid to stand and strike with him. GSP disabused the challenger of that notion in the first round when he broke Koscheck's right orbital bone with a stiff jab.

GSP continued to attack the eye throughout the five rounds of the fight. Ringside doctors examined Koscheck between rounds but allowed Koscheck to fight all five rounds.

Welterweight Josh Koscheck underwent successful surgery Monday in Boston to repair a broken orbital bone on the right side of his face, sources close to the UFC-signed fighter told ESPN.com.
...
Because of the severity of the injury, which was made worse when air pockets formed behind and under the break, Koscheck was unable to fly home. He was driven from Canada to Boston, where he was forced to postpone surgery for a week as swelling subsided.

Koscheck is expected to be out for up to four months. He received a 60 day medical suspension after the fight.

More info about orbital bone repair and a very grisly surgery photo (that is NOT Josh Koscheck) in the full entry. 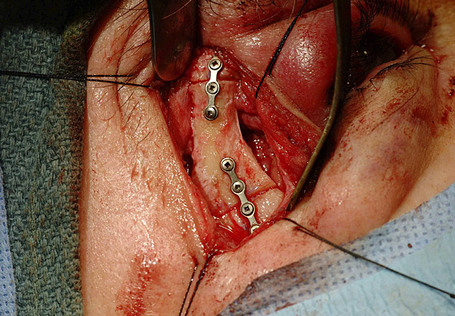 Rim fractures are often referred to as Trimalar fractures because the Zygomatic bone (also called the Trimalar bone because of its three articulations or connections to other bones) is the main bone of the lateral orbit. It is a very prominent and thus protective bone of the orbit and is frequently involved in trauma. This bone is repaired with titanium plating after being wedged back into place. The interior orbital bone repair involves releasing entrapped tissue from the floor and medial wall and placing a plate to cover the defect. Floor and medial wall fractures occur when the pressure in the orbit is increased due to trauma generally from an object greater than the width of the orbit such as a ball or fist. This increased pressure causes the thin orbital bones to give way releasing the pressure and thus protecting the orbital contents such as the eye! So thank God for orbital fractures -- they save a lot of sight. Both Trimalar fractures and orbital fractures are repaired by Dr. Carey generally without a skin incision. The incision is made through the conjunctiva of the lower lid. Sometimes an eyebrow, lateral canthal or mouth incision is used as well.